Army names its top soldier, NCO of the year 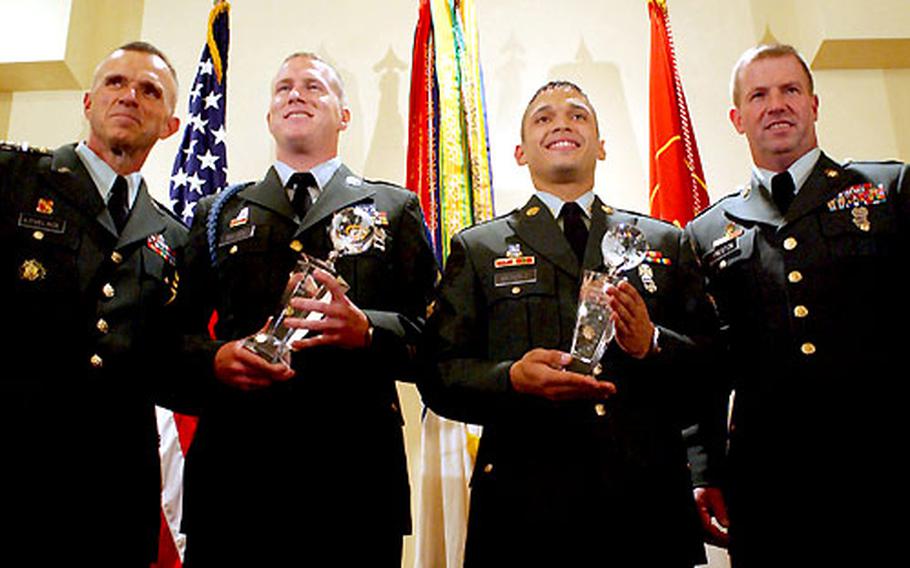 From left, Lt. Gen. James J. Lovelace, director of Army staff; Staff Sgt. Andrew J. Bullock, representing Training and Doctrine Command; Spc. Wilfredo A. Mendez, of 8th Army; and Sgt. Maj. of the Army Kenneth O. Preston at the 2004 Department of the Army Noncommissioned Officer and Soldier of the Year competition ceremony in Fort Myer, Va., on Friday. Bullock and Mendez received their titles after a weeklong testing period. The two will now travel with Preston to Army bases around the world. (Reeba Critser / Courtesy of U.S. Army)

Staff Sgt. Andrew J. Bullock and Spc. Wilfredo A. Mendez were named the Army&#8217;s noncommissioned officer and soldier of the year, respectively, during a ceremony last week at Fort Myer, Va.

The two were selected after a weeklong competition with candidates from 10 major Army commands. The competition put the soldiers through the Army Physical Fitness Test, a six-mile road march, day and night land navigation courses, weapons qualification, other tests and a written exam and essay.

They also appeared before a board of senior soldiers who appraised not only the competing soldiers&#8217; answers to questions but also their military bearing, speaking ability, military knowledge and military record.

Sgt. Maj. of the Army Kenneth O. Preston presided over the board. In announcing the winners, he urged all the competitors to &#8220;take what you&#8217;ve learned in the past week &#8230; and apply it to your daily life,&#8221; according to an Army news release.