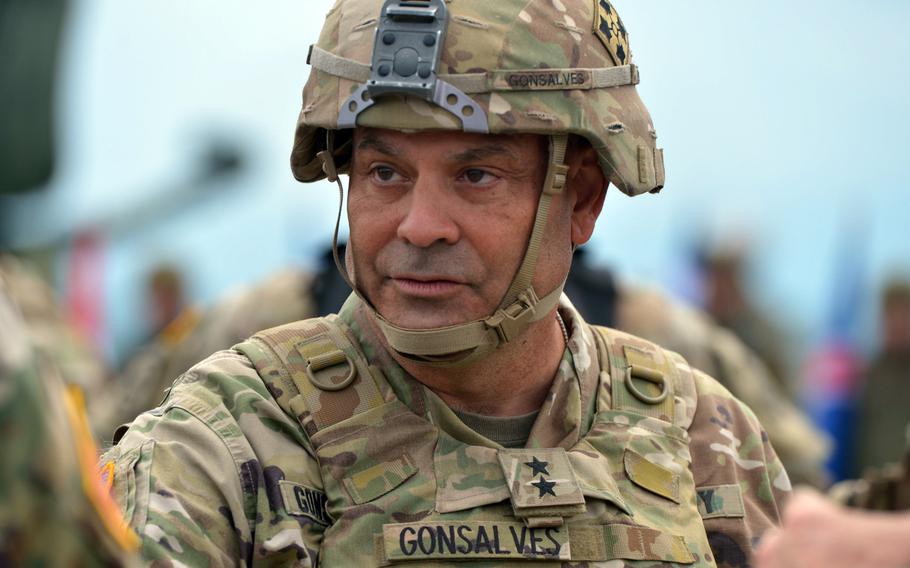 Maj. Gen. Ryan Gonsalves talks to fellow officers after a live-fire demonstration at the Saber Guardian exercise near Cincu, Romania, July 15, 2017. The Army took administrative action against Gonsalves for comments he made to a congressional staffer. (Michael Abrams/Stars and Stripes)

The U.S. Army says “appropriate administrative action” has been taken against a two-star general faulted for mistreating a congressional staffer, but the service refused to specify the steps it took against Maj. Gen. Ryan Gonsalves.

“The matter is now closed,” Army spokeswoman April Cunningham said in a statement.

Gonsalves, who served as commander of the Fort Carson, Colo.-based 4th Infantry Division until August, had been in line for a promotion. In July, he was nominated by the Army for a third star, but the White House rescinded the nomination on Nov. 27, after an inspector general’s probe.

The allegations against Gonsalves centered on complaints that he failed to treat a female congressional staffer with “dignity and respect” during an October 2016 meeting at his Fort Carson headquarters.

Gonsalves is now serving as a special assistant to the commander of the Fort Hood, Texas-based III Corps. Special adviser postings in the Army can function as brief stopping points while a general awaits promotion or is stuck in limbo while under investigation.

The Army did not say whether Gonsalves would be offered a promotion in the future or whether his current assignment would be his last.

The IG says it was able to substantiate an accusation that Gonsalves called the congressional staffer “sweetheart” during a meeting about the 4th Infantry Division’s mission, which amounted to a violation of Army command policy.

The IG complaint also said that Gonsalves took issue with the staffer’s youth and told her she should take detailed notes on why the military needed funding “since she was a Democrat and did not believe in funding the military,” the IG report said.

Another staffer at the meeting confirmed that Gonsalves used the word “Democrat.” He said that he was “shocked” by use of the word but did not regard the overall tenor of Gonsalves’ political comments as derogatory.

Generals are expected to refrain from overt expressions of partisanship while in uniform.

Gonsalves denied making disrespectful remarks about political affiliation during the meeting, and five other witnesses testified they didn’t hear the general make such remarks. As a result, the IG determined that the evidence did not support a conclusion that Gonsalves comments were “objectively disrespectful.”

Gonsalves also denied calling the female staffer sweetheart, but the IG said the preponderance of the evidence indicated otherwise. Sexist remarks by military leaders can damage a command’s overall culture and set the stage for harassment, according said Lydia C. Watts, who leads the Service Women’s Action Network advocacy group. “They (the military) should be adamant in stating how these behaviors harm unit cohesion and mission effectiveness and transparent on how they hold leadership accountable for their failures in creating an environment free from sexual harassment and assault,” Watts said. In recent years, misconduct among senior leaders has been a growing concern inside the Pentagon. In November, the Pentagon inspector general reported a 13 percent increase in misconduct complaints between 2015 and 2017. High-profile scandals, frequently involving extramarital affairs, have forced numerous generals into early retirement.

The complaint against Gonsalves did not involve any accusations of sexual misconduct.