Army mortarmen fire on the mountains 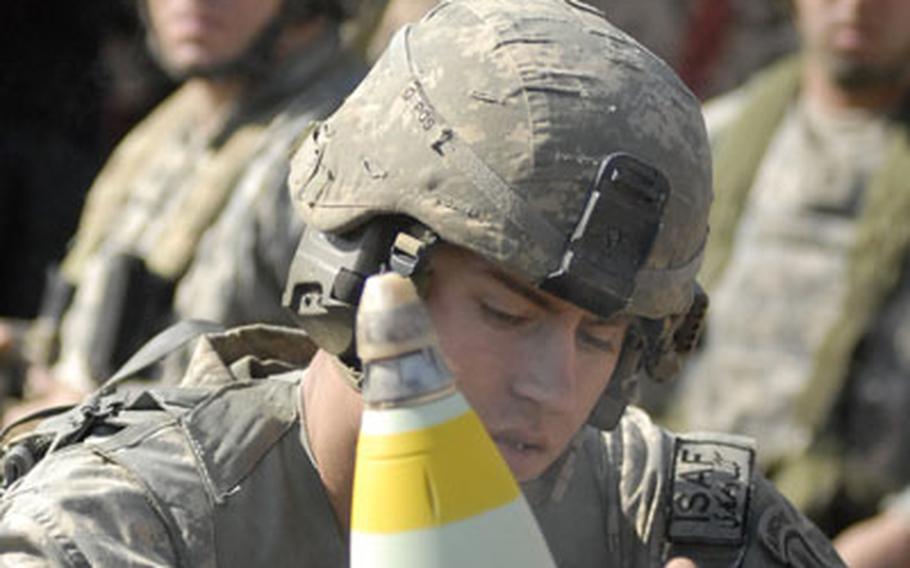 Martin&#39;s team fired off dozens of rounds at the surrounding ridge tops after intelligence acquired by his unit, who are members of the 2nd Battalion, 503rd Paratrooper Infantry Regiment, 173rd Airborne Brigade, warned of a potential attack by insurgents. (Les Neuhaus / S&S) 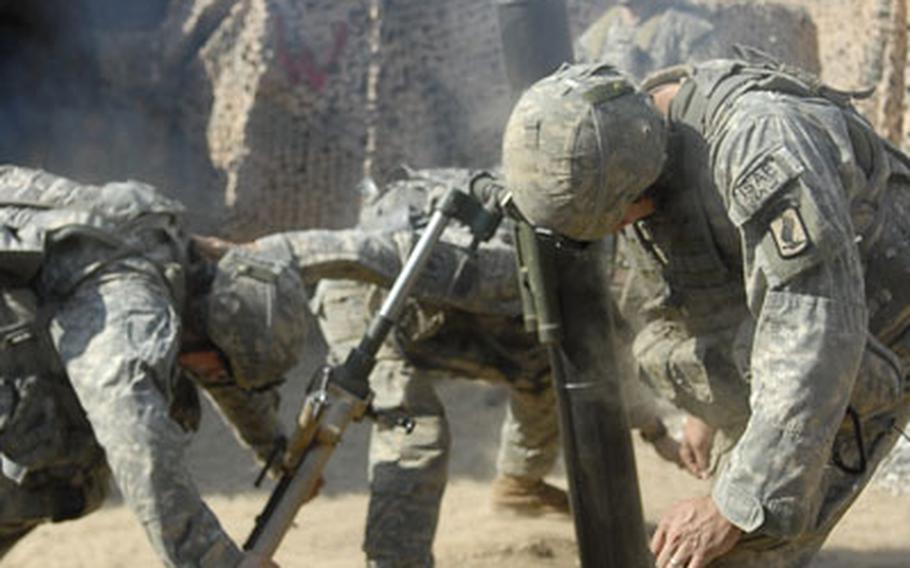 The ground shakes and dust flies as a mortar team from the 173rd Airborne Brigade Combat Team fire at militants on a nearby mountainside. (Les Neuhaus / S&S) A 120 mm mortar team, all members of the 173rd Airborne Brigade Combat Team, fires off high-explosive munitions at a mountain ridge in the Pech RIver Valley. (Les Neuhaus / S&S)

While the war in Iraq rages on, so does the one in Afghanistan.

While little is reported about the daily fighting in the northeastern mountains close to the border with Pakistan and just below the Hindu Kush, U.S. troops are engaging militants around the clock.

Holding those militants back might be more difficult if it weren&#8217;t for the constant barrage of 60, 81 and 120 mm mortar fire lobbed at those same mountainsides by American soldiers dirty to the bone with war.

They get little to no time off and sleep in their threadbare uniforms &#8212; waiting for the next assignment to come down the line &#8212; anchored to the heavy weapons.

Rankin&#8217;s comments came as his men fielded a fire mission based on intelligence that his base might be attacked on Thursday.

But it&#8217;s difficult distinguishing that from any of the other constant threats. They handle it as if there was a potential to be overrun and they pound the ridge lines and mountainsides with the mortars.

It&#8217;s not always the base they are protecting. It could be a patrol miles away, under fire from Taliban fighters. In those instances, and as long as that patrol is within the maximum range of the 120 mm mortar, the men back up other patrols and companies.

&#8220;We have to keep our mind focused, whether or not there is a firefight going on around us or out of view,&#8221; Thomas said after his team finished the ear-piercing, ground-shaking firing session.

In the primitive sleeping quarters on the small base &#8212; which is tucked between two mountain peaks around 5,000 feet high and at the base of a rock-hewn cliff overlooking the gushing Pech River &#8212; men not expecting the fire mission are jolted by the sudden force echoing through their wooden doors.

But it&#8217;s a necessary nuisance. Pakistan&#8217;s lawless Northwest Frontier Province, a mere 25 miles away and directly across the border from the area in Afghanistan where the mortarmen are positioned, is currently being pounded by Pakistan&#8217;s air force.

It has long been rumored to be the hide-out for al-Qaida leader Osama bin Laden.

The men at the base need no reminders of why they are here.

The noncommissioned officer in charge, Sgt. 1st Class Jason Levy, 31, and from Cranford, N.J., said several of the men currently are being considered for medals of valor, such as the Bronze Star, for their efforts.

Some of the men, who are all members of the 173rd Airborne Brigade Combat Team, also have served in Iraq. The brigade is on its second deployment to Afghanistan.

The men normally are stationed in either Italy or Germany, but haven&#8217;t had much time to travel Europe.