Army medic reunites with man she helped save 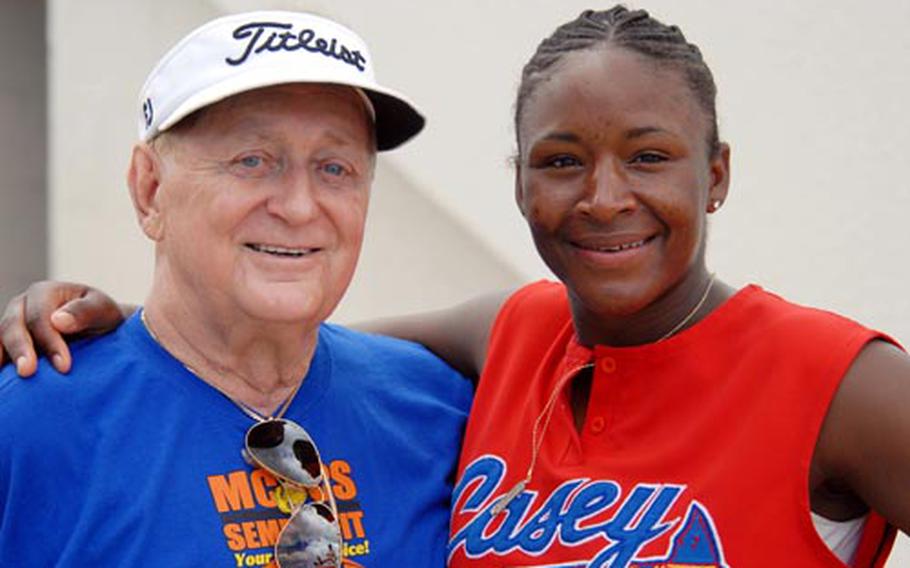 John Zivic, left, is reunited with Army medic Jacqueline Kershaw of South Korea&#39;s Camp Casey on Saturday during the 10th Firecracker Shootout Interservice Softball Tournament at Field 2, Foster Athletics Complex, Camp Foster, Okinawa. Kershaw is one of five people credited with saving the life of Zivic, a basketball referee for more than 40 years. He collapsed and suffered a heart attack during January&#39;s Martin Luther King Basketball Tournament; Kershaw, who played for Area I&#39;s basketball team, and four others rushed to his side to perform CPR. (Dave Ornauer / S&S)

Kershaw, an Army medic assigned to Camp Casey in South Korea, was reunited Saturday with a basketball referee whose life she helped save during January&#8217;s Martin Luther King Invitational Tournament.

Kershaw, 30, a sergeant from Columbia, S.C., also played for the Area I team in the MLK tournament. She was one of five medics and corpsmen who rushed to Zivic&#8217;s side when he collapsed while officiating an MLK game Jan. 20 at the Foster Field House.

Zivic, 72, a retired Air Force master sergeant from Lorraine, Ohio, has been refereeing basketball since 1966 and has officiated 14 DODDS-Pacific Far East tournament title games since 1971.

He had been a civilian area coordinator for Camp Kinser when he was stricken. He now is a health and wellness counselor for Marine Corps Community Services Okinawa. He&#8217;s due to retire in 11 months.

When Kershaw learned she was going to Okinawa for the Firecracker, "I told myself I had to see him," she said. "Then I got to see him, I got my picture taken with him. I&#8217;m so happy."