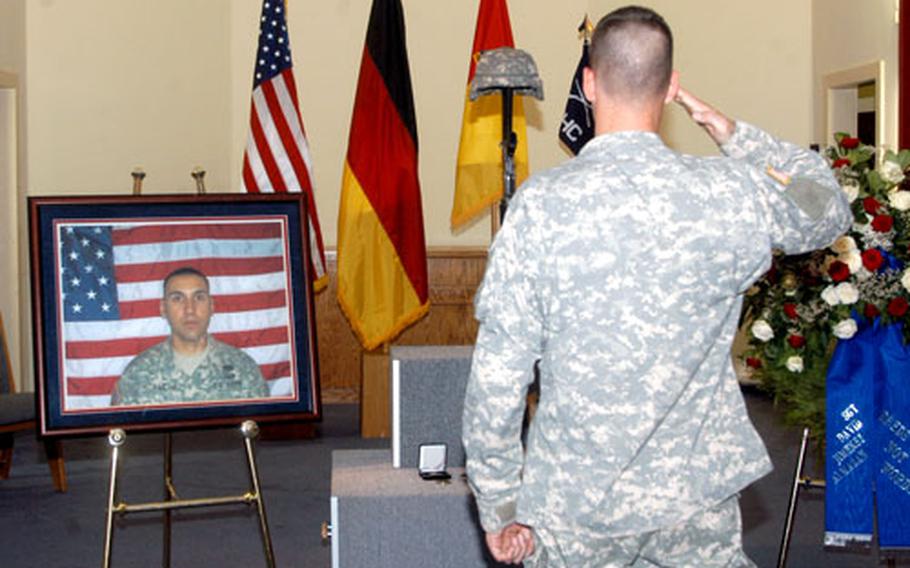 Members of the Friedberg military community in Germany on Friday gathered for a memorial service for Sgt. David J. Almazan, who died in combat in Iraq on Aug. 27. Snapping a salute in Almazan’s honor is Pvt. Brendan Burkhardt. (Kevin Dougherty / S&S)

FRIEDBERG, Germany &#8212; Army Sgt. David Jimenez Almazan was new to the unit, though not new to combat, having already served in Afghanistan.

So when the medic arrived in Friedberg, Germany, on the last day of May, it wasn&#8217;t long before they sent him downrange to join his new unit, the 1st Battalion, 36th Infantry Regiment, 1st Brigade, 1st Armored Division. In Iraq, medics matter &#8212; big time.

Collazos served in Iraq with Almazan and was able to attend Friday&#8217;s service because he is on leave for 15 days. Though he didn&#8217;t know Almazan well, he recalled how the medic made an immediate impact as soon as he reached the unit&#8217;s camp in Hit, Iraq.

The chapel on Ray Barracks in Friedberg is a small, cozy place in which to pray. Dozens of soldiers were drawn to it Friday, wanting to pay their respects to Doc and to his wife, Salina, who sat in the front row.

Chaplain (Capt.) Robert D. Crawford spoke of the frustration of &#8220;looking among the fragments of this broken situation&#8221; and trying to make sense of it.

It also was taken from Salina, the love of his life. Their tight bond was cited again and again by friends and family members in newspaper articles from Iraq to Van Nuys, Calif., where Almazan grew up after his family emigrated from Mexico. His comrades in arms remembered how quick he was to show her picture, which he always kept on him.

When Sgt. 1st Class Larry Perrine read off Almazan&#8217;s name during a symbolic roll call, the stillness of the moment mingled with Salina&#8217;s sobs and a subsequent gun salute. And taps never fails to touch the heart.

Later, a couple of soldiers uttered a familiar refrain heard at other memorial services in other military communities: &#8220;We&#8217;ve been attending too many of these lately.&#8221;