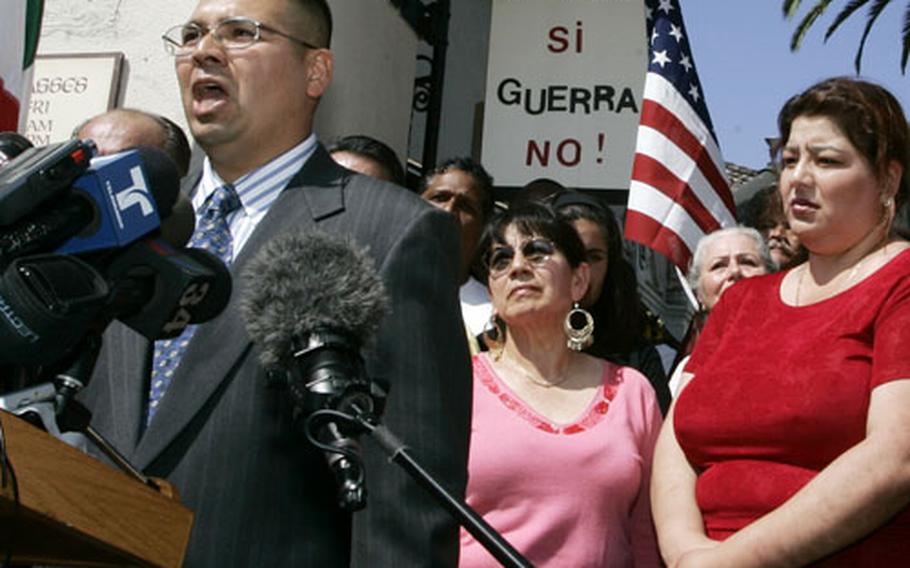 Army Spc. Agustin Aguayo, 34, surrounded by supporters and his wife Helga, right, as he talks during a news conference at Our Lady Queen of Angels Church in Los Angeles on Tuesday. (Damian Dovarganes / AP)

The Army medic who surrendered in California last week after going AWOL to avoid a second tour in Iraq likely will be sent back to Germany, or perhaps even downrange, to face a possible court-martial, according to his wife and other supporters.

A couple of soldiers from Spc. Agust&#237;n Aguayo&#8217;s unit in Schweinfurt, Germany, have been sent to the States to pick him up, said Aguayo&#8217;s wife, Helga. The 34-year-old soldier, a professed conscientious objector, grew up in the Los Angeles area, about three hours south of Fort Irwin National Training Center, where he surrendered last week.

&#8220;What they (Fort Irwin officials) did say is that when he touches down in Germany, they could send him on to Kuwait,&#8221; Helga Aguayo said.

According to Michael Sharp, director of the Military Counseling Network, an independent advocacy group for U.S. soldiers based in Europe, the escorts sent to pick up Aguayo got delayed. Sharp added that attorneys and supporters of Aguayo would prefer any legal proceedings be handled in Germany &#8220;than in a tent in the desert.&#8221;

Agust&#237;n Aguayo, a medic with the 1st Battalion, 18th Infantry Regiment, went absent without leave on Sept. 2. He turned himself in last week and faces charges of being AWOL and with missing a movement when his unit began deploying Sept. 1.

Supporters say Aguayo tried to surrender to the military police in Schweinfurt on Sept. 2, but he was told to go home, grab his gear and return to his unit, which was still in transit to the Middle East. Instead, Aguayo, who applied for conscientious objector status more than two years ago, opted to go AWOL.

Aguayo served a year in Tikrit, Iraq, while his request for conscientious objector status was being considered. He returned from Iraq in February 2005, but by then his application had been denied.

Since then, Aguayo has been waging a legal battle in U.S. federal court to have the Army&#8217;s decision overturned. Aguayo&#8217;s regular four-year enlistment was to have ended in January 2007, but the Army extended it before he went AWOL. Aguayo maintains his view toward armed conflict has changed since he joined the Army and that he is now morally against war.