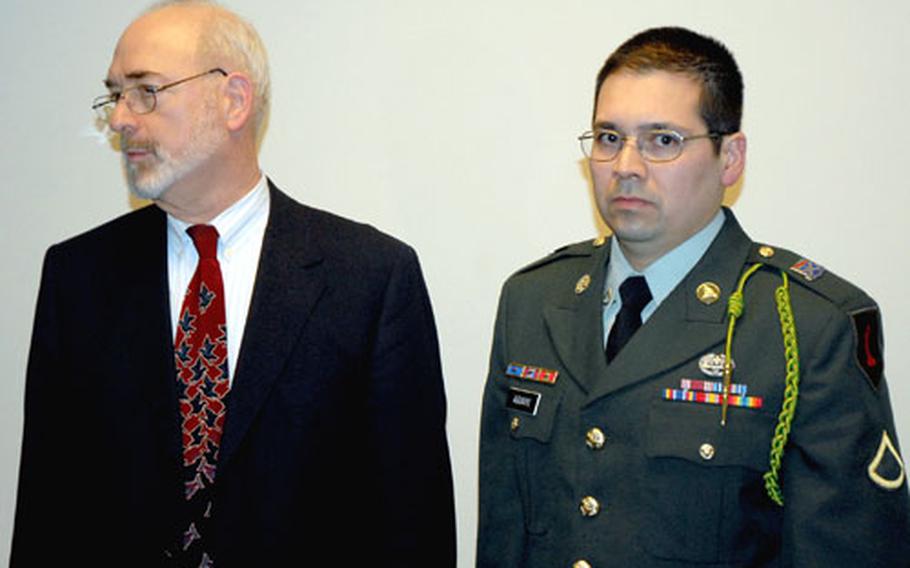 W&#252;RZBURG, Germany &#8212; A Schweinfurt-based Army medic was found guilty Tuesday in a Leighton Barracks courtroom of desertion with the intent to avoid hazardous duty and shirk important service, and missing movement.

Aguayo was credited with 161 days of pre-trial confinement and will serve 79 more days, according to Hilda Patton of the V Corps public affairs office.

By first missing a required movement with his unit then jumping out his bedroom window and fleeing to Southern California, Aguayo was convicted of deserting his unit on Sept. 1-2, 2006, to avoid a yearlong deployment to Iraq. The deployment would have been Aguayo&#8217;s second tour downrange.

Speaking with Aguayo at a post-trial press conference, lead defense attorney David Court said, &#8220;We&#8217;re both very grateful that the judge gave a relatively light sentence. As you know, he could have sentenced him to seven years based on the findings.&#8221;

Court said he expected that Aguayo would not spend &#8220;much more than six weeks in confinement.&#8221;

After waiving his right to trial by military panel and opting to face only a judge, Aguayo stoically explained his actions to Judge (Col.) R. Peter Masterton, beginning with his decision to disregard orders to form up with his fellow soldiers on Sept. 1, 2006, in order to move to Ramstein Air Base and on to Kuwait later in the evening.

Aguayo told Masterton that after showing up in his battalion area the next morning, he was escorted back to his living area by a noncommissioned officer in order to pick up personal items. At that point, he jumped out his bedroom window in Askren Manor Housing Area in Schweinfurt and eventually made his way back to his hometown near Los Angeles.

Sitting just in front of his parents, wife Helga, two daughters and numerous other family members and friends, Aguayo recounted how he eventually surrendered to military authorities on Sept. 26, and was escorted back to Germany by members of his unit.

Born in Guadalajara, Mexico, Aguayo applied for conscientious objector status two days before leaving for his first deployment in 2004. While in Tikrit, Iraq, from 2004-05, Aguayo, who joined the Army on Jan. 14, 2003, refused to load his weapon at any time, even pretending to load ammunition at points, he told the judge. During training rotations before the deployment that he missed, he refused to even pick up a weapon and received multiple disciplinary actions.

Members of his unit &#8212; including both his former platoon leader and NCO supervisor &#8212; traveled from Iraq to testify at the trial. They testified that if Aguayo had deployed, they would have tried to employ him in the battalion aid station, away from the combat patrols and the danger that the rest of the 40 battalion medics face daily.

Roberts, along with Sgt. Steven Garcia, testified that Aguayo&#8217;s leaders were trying to make him a &#8220;legal non-available&#8221; soldier by having pending legal actions based on his refusal to carry a weapon.

Aguayo testified in an unsworn statement that by missing movement, he thought his unit would say, &#8220;OK, we knew it all along,&#8221; and charge him for it, thereby rendering himself non-deployable.

Since leaving Germany in the fall, 23 members of 2nd Brigade &#8212; including three from Aguayo&#8217;s battalion, which is stationed in Baghdad &#8212; have been killed in combat.