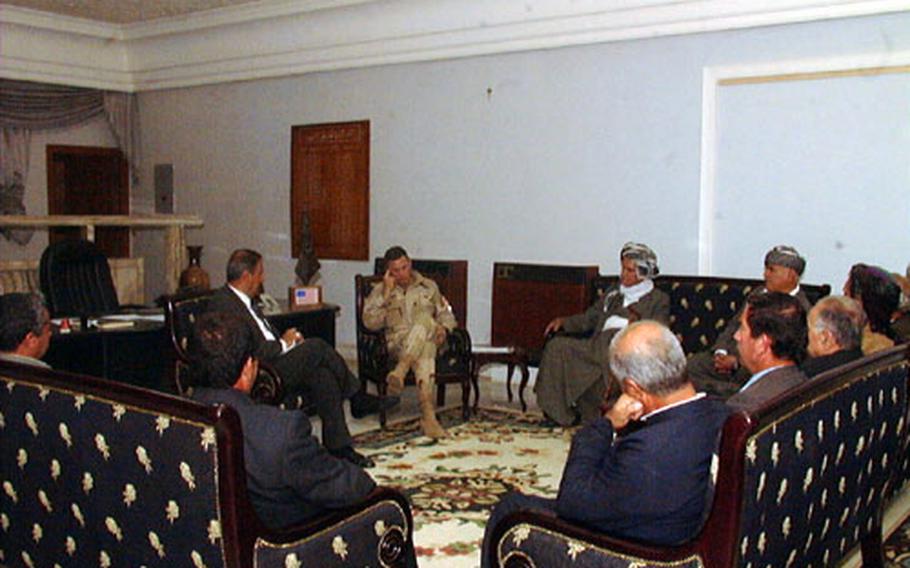 A month ago, the 173rd Airborne Brigade, commanded by Army Col. Bill Mayville, was focused on fighting the Iraqi army. Now Mayville&#39;s troops — and others across the country — are fighting to maintain the peace. The 43-year-old commander — and "mayor" of Kirkuk — meets frequently with local leaders to gauge the needs of an area that includes roughly a million people and scores of villages. (Kevin Dougherty / S&S)

A month ago, the 173rd Airborne Brigade, commanded by Army Col. Bill Mayville, was focused on fighting the Iraqi army. Now Mayville&#39;s troops — and others across the country — are fighting to maintain the peace. The 43-year-old commander — and "mayor" of Kirkuk — meets frequently with local leaders to gauge the needs of an area that includes roughly a million people and scores of villages. (Kevin Dougherty / S&S) 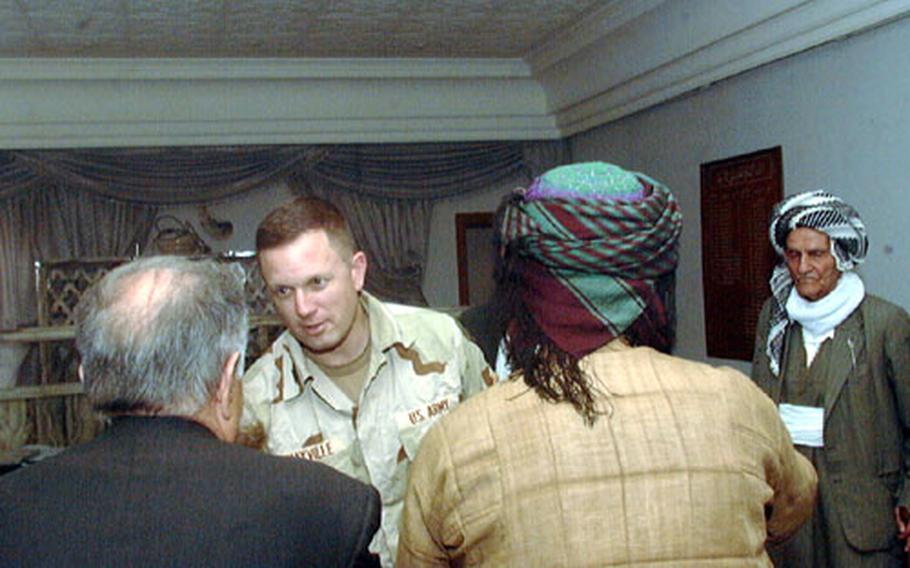 KIRKUK, Iraq &#8212; The evening meet-and-greet with Turkmen community leaders has gone well, Army Col. Bill Mayville thought as he sank into his seat for the short convoy back to Kirkuk airfield.

The 43-year-old West Point Academy graduate had been so busy, so consumed with war, and now peace, that he hadn&#8217;t given it much thought.

The brigade, headquartered in Vicenza, Italy, operates out of the airfield in Kirkuk, a city of at least 750,000 people. Its area of responsibility extends well beyond the city limits to include scores of villages and hamlets, and even a vast oil and gas field.

In a way, Kirkuk is a microcosm of Iraq: The ethnic mix includes Arabs, Assyrians, Kurds and Turkmen.

The diversity makes Kirkuk special. But the mixture also makes the city ripe for revolt. So far, according to Mayville, there is relative calm.

Stars and Stripes caught up with Mayville late one morning as he was emerging from his tactical operations center at the airfield.

Soon his convoy pulled into a gated lot behind the best municipal building in town. Mayville breezed into a spacious office with a white marble floor, a large black conference table and four elegant but stiff-looking couches. There was a working desk for him, a couple of large floor rugs and some shelving topped by an elegant vase of flowers still wrapped in cellophane.

He and a few members of his staff reviewed the afternoon itinerary of meetings. As often as he can, he confers with local leaders of all walks of life. This afternoon&#8217;s list includes a meeting with a Sunni religious elder, three local radio and TV officials, and 10 leaders of the Salhi tribe who are waiting outside of this newly acquired office.

Once they are seated, the tribe elder, Sheik Quedar, grips his wooden cane as he thanks Mayville and all coalition forces for deposing Saddam Hussein.

Iraq &#8212; and indeed the whole Middle East &#8212; is a land where tribal ties run deep, like the roots of a mighty tree. In the months and years ahead, the greatest challenge for the developed world may well be getting the people of this region to embrace the entire tree.

The Salhi tribe appears to hold a lofty perch. Tribal leaders lay claim to a horseshoe-shaped tract of land north of Kirkuk that contains vast deposits of oil and natural gas. Estimates vary, but the footprint includes at least 75 Salhi villages and 150,000 people.

The problem is that many of their people were sent packing in the 1990s by the ruling Baath Party in a systematic program to better control the oil-rich lands in the north.

Some of the Arabs who moved in then have moved out, and tribal leaders want permission to reclaim their homes and villages. Mayville asked for their patience.

In the long run, Mayville wants the Pentagon&#8217;s Office of Reconstruction and Humanitarian Aid &#8212; and other agencies &#8212; to settle land claims. For now, the colonel has no objections with them reclaiming abandoned properties, but with one caveat.

For coalition forces in Kirkuk and everywhere in Iraq, security and peace are paramount. Again and again, Mayville repeated that edict to everyone he met.

After Kirkuk fell, Mayville said it took three days to coax the first Arab policemen back to work. The colonel then struck upon a novel way to reconstitute the police force in the ethnically mixed city.

One cop from each entity &#8212; Arab, Assyrian, Kurd and Turkmen &#8212; was told to report to work the next morning. They did, and worked together. The next day the team was doubled, and then doubled again the following day. Most of the cops are unarmed, often working in conjunction with U.S. forces.

Criminals engaged in threats, looting and vandalism recently targeted an Arab neighborhood. Mayville brought in a tank and positioned it for all to see. Some Arabs were taken aback at first, but soon realized his intent.

Aside from creating a stable and secure environment &#8212; still complicated in the north by roving bands of armed marauders &#8212; Mayville told tribal leaders his greatest challenge is meeting the basic needs of the people, from food and water to public services, such as electricity, education and criminal justice.

He later told the media officials of his desire to hold a live radio call-in show, with him and a translator at the microphone to start.

But he plans to hold a series of shows, gradually bringing in local leaders to participate in the process. That, Mayville said, will put them on the spot in a live, public forum.

Learn as you go

Mayville admits he&#8217;s made some mistakes.

Early on, he wanted to convene a conference of area leaders, but the list of participants that came back to his staff included roughly 1,000 names.

Way too many, he said. The list was eventually whittled down to six.

Mayville soon realized there was no way these six men could or would represent the interests of such a diversified community that he likened to a Rubik&#8217;s cube.

Tribal leaders recounted for Mayville some of the atrocities committed against their people, who are ethnic Kurds but apolitical. In some cases, Sheik Quedar said, the torture included cutting out the tongues of eloquent or effective speakers.

As the meeting concluded, Mayville turned to Quedar and looked him in the eye.

This went over big with the elders, and they left looking satisfied and impressed.

Asked a few minutes later from which book or poem that passage came from, Mayville said none. It just came to him, and it seemed like the appropriate thing to say.