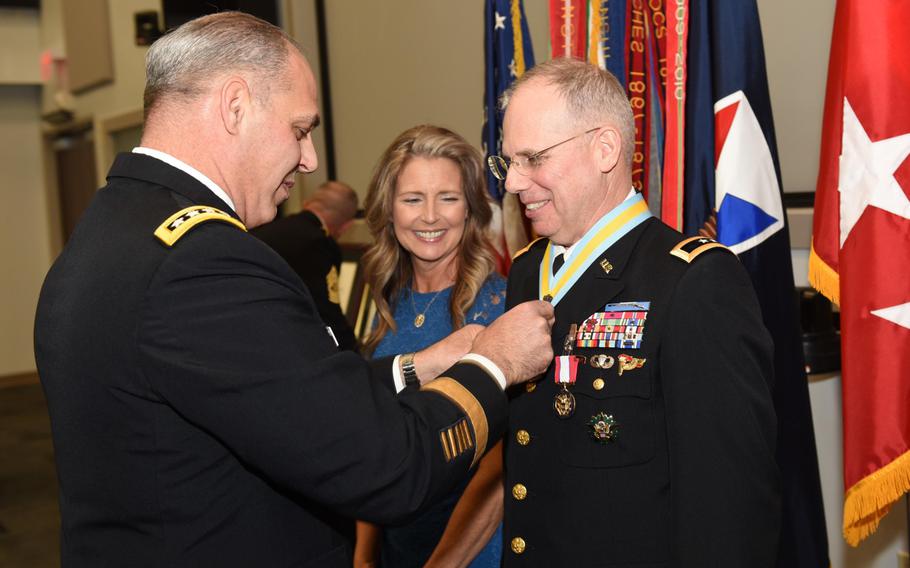 Maj. Gen. Allan Elliott receives honors at his March 28, 2019, retirement from Army Materiel Command Gen. Gus Perna, who officiated at the ceremony. The Army may need to pay a larger midcareer incentive to retain officers under the newly introduced blended retirement system, according to a Rand Corp. report. (Doug Brewster/U.S. Army)

The Army may need to pay officers a much larger midcareer incentive under the new blended retirement system if it wants to retain the same mix of experience it has now, a service-commissioned report said.

To keep them on active duty for at least 20 years, officers headed toward the 12-year mark in service may on average need as much as eight months of salary as continuation pay, a new incentive that does not exist under the Army’s legacy retirement plan, according to a Rand Corp. report published earlier this month.

The study comes as the Army moves away from its legacy retirement system, which pays a larger guaranteed amount to soldiers after at least 20 years of service, to a blended system that pays out after less time served and matches more of a soldier’s contributions to a retirement account.

Servicemembers who were in uniform prior to 2018 were grandfathered into the legacy retirement system, but those with fewer than 12 years of service, or reservists with less than 4,320 retirement points, can opt into the blended system.

Moving to the blended system creates uncertainty for the Army over future costs, outflows from active duty to the reserve component and “whether the experience mix of the Army would change in a way that no longer meets Army readiness requirements,” the Rand report stated.

The Army must offer a minimum of 2.5 months of basic pay to active duty soldiers and a half-month of pay to Reserve and National Guard soldiers as continuation pay, if they are participating in the blended retirement system.

The minimums would sustain enlisted retention at current rates, the study said.

The Rand simulations show that the blended system would improve Reserve and National Guard participation among officers at minimum continuation pay rates, “but at the cost of substantially lower retention of midcareer [regular Army] officers.”

Under one scenario that leaves continuation pay at their minimums, fewer active duty officers complete 20 years of service; meanwhile, officer participation in the Reserve and the National Guard rise by 7.2% and 2.1%, respectively.

To keep current levels of retention and experience, an active duty major with 12 years of service would need to be offered about $140,000 in continuation pay, rather than the minimum of $17,633, the study concluded. Under an optimized scenario, Reserve officers would be offered about two months’ salary and National Guard officers would receive a full month of pay, rather than the half-month minimums.

The study assumed that the continuation pay would be paid at 12 years of service, though the law allows the Army to pay as early as the eighth year of service.

While the added continuation pay would cost the Army more in the short-term, over time the service would save money because opt-in rates into the more cost-effective blended system would be higher, the study said.

The blended system pays out a smaller pension than the legacy plan, which pays soldiers who serve at least 20 years a set amount based on their time in service and highest three years of base pay. Reservist retirement is earned based on a system that awards points for activity in uniform.

However, in addition to the new continuation pay benefit, the blended system’s Thrift Savings Plan contributions vest after two years and allow contributions up to 5% of basic pay with a 4% match.