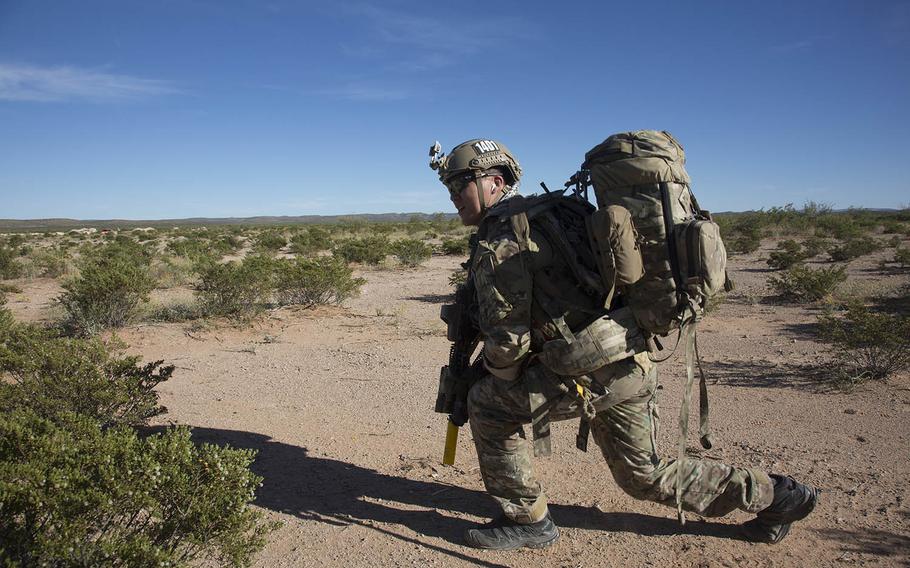 Special Forces soldiers conduct a downed pilot simulationat Fort Bliss in Texas on Oct. 18, 2016. The Army and Marine Corps have worked together to determine how they can reduce the weight of gear used by combat troops through better materials, manufacturing and doctrine. (Alexander Holmes/U.S. Army)

SAN ANTONIO — The Army and Marine Corps are working together to lighten the things they carry.

Close up urban combat and the threat of improvised explosive devices in Iraq following the 2003 invasion transformed the ideas of how much armor troops needed to protect themselves, said Cary Russell, the director defense capabilities and management at the Government Accountability Office.

In addition to ballistic protection plates worn by combat troops on the front and back, the Pentagon buried troops under items such as throat and groin protectors and side plates to protect the abdomen and to shield against snipers and concealed roadside bombs used by insurgents. That caused the weight of personal armor to grow to unprecedented numbers, Russell said.

But now that troops have returned from deployments and training with physical injuries caused by heavier equipment, the military has looked to bring the overall weight of gear back down.

“The Army and Marine Corps are learning a lot more about the impact of weight,” Russell said Tuesday. “They started to see how it affects performance and looked for alternatives.”

Russell led a recently released GAO assessment, a provision within the 2017 budget, on how the two services are working to reduce the load of gear that soldiers and Marines carry into combat.

Helmets, armor plates and plate-carrying vests account for about 27 pounds of the 119 pounds carried by combat arms soldiers and 117 pounds by Marines, which is nearly a quarter of the load that also includes weapons and ammunition, food and water, communications equipment and other items, the report stated. Russell said it is unclear when that weight peaked.

An Army field manual on foot marching published in 1990 suggested a fighting load of no more than 48 pounds and marching load limited to 72 pounds. While the debate over an acceptable combat load has been a fixture of warfare for centuries, Russell said he was not aware of any other Army manual that has offered new recommendations.

Russell said the 1990 manual is dated, printed 13 years before improvised explosive devices became the signature weapon of Iraq and Afghanistan and the catalyst for more layers of personal armor.

The manual will be updated this year and could reflect a new suggested load, he said.

The Army is developing a goal to reduce the weight of armor plates by 20 percent by examining new manufacturing and technological practices, and both services are looking to trim the weight of their vests in half by eliminating excess protection, the report stated. Russell said 20 percent was a realistic target based on the latest technology before diminishing returns are triggered and plates simply cannot be made lighter.

Armor improvements are “constrained so that protection never decreases through the course of weight reduction, and in some cases the protection level is increased simultaneously with the weight reduction,” said Debi Dawson, a spokeswoman for PEO Soldier, an Army program that evaluates equipment and gear.

“We examine each situation against the operational needs and the technological capabilities available,” she said.

The two services closely tracked enemy capabilities to tweak protective armor requirements since 2003 when ground combat in Iraq began, the report stated. However, procurement and fielding can lag behind immediate threats on the battlefield.

Side-armor plates were sent to the front lines in Iraq in 2006 following a study by the Pentagon that found 80 percent of Marines who died from upper torso wounds might have been saved by additional protection, according to a New York Times report.

Creating health issuesAdvanced combat helmets and ceramic plates prevent and reduce injuries from shrapnel and gunfire, most recently in Iraq and Afghanistan. But the weight of armor in the overall combat load, a historical tension between the need for protection and the need for mobility and speed, can result in back and other musculoskeletal injuries and reduced effectiveness in combat, according to a study by the Naval Health Research Center in San Diego.

Karen Kelly, a research physiologist at the research center, found gear loads of more than 30 percent of a servicemember’s body weight reduced performance and marksmanship in a simulated setting, the Navy said in December.

The effects can have lingering issues throughout and after service. There were nearly one million medical encounters in the military for back pain in 2013, according to the January issue of the Journal of Orthopaedic Research.

Marines in a study who reported disc degeneration and lower back pain had decreased range of motion, the journal stated.

The consequences cost billions of dollars in the military and the Department of Veterans Affairs in the form of compensation and care, said Phillip Carter, a former Army officer who studies military and veterans issues at the Center for a New American Security, a Washington, D.C. think tank.

“Musculoskeletal issues are the top ailment being claimed by post-9/11 veterans seeking care from VA. This relates both to the heavy loads being carried by troops day after day overseas, as well as the intense physical training and combat training troops endure while stateside,” Carter said.

“When you consider that the body armor often gets worn during both peacetime and wartime work, it adds up to a lot of strain on the body,” he said.

The Army also issued a contract to develop a combat helmet that reduces weight to 2.45 pounds, down from 3.23 pounds, Stars and Stripes has reported.

Both services are also considering an idea to give commanders leeway to determine their individual armor needs, the GAO report stated.

There are logistical and technological solutions that could help reduce the overall burden. Combat troops carry more water and ammunition due to varying confidence levels in resupply efforts, the report stated.

The Marines have implemented an aerial resupply system that can drop 700 pounds of supplies in remote areas, the report stated. All-terrain vehicles and unmanned logistical vehicles can carry up to 1,500 pounds, which could reduce the weight of every item troops carry in addition to their own armor and weapons.

The Pentagon had developed the Legged Squad Support System to travel with combat troops with minimal guidance. The system mimics the mechanics of a pack animal and resembles a metal, headless mule able to carry up to 1,000 pounds, the report stated. Though the Army and Marine Corps are no longer pursuing this specific system, the services plan to test additional unmanned ground systems with similar load-carrying ability.

Polymer casings to reduce the weight of ammunition and lighter batteries will potentially help, according to the report.