Army maneuvers through hurricane havoc on way to Europe mission

An M1A2 Abrams Battle Tank from 2nd Armored Brigade Combat Team, 1st Infantry Division, offloads from a ship in Gdansk, Poland, Sept. 13, 2017. Moving two Armored brigades - one to Europe, one back to the U.S. - is the biggest logistical Army effort in Europe since the Cold War. (Orlandon Howard/U.S. Army)

An M1A2 Abrams Battle Tank from 2nd Armored Brigade Combat Team, 1st Infantry Division, offloads from a ship in Gdansk, Poland, Sept. 13, 2017. Moving two Armored brigades - one to Europe, one back to the U.S. - is the biggest logistical Army effort in Europe since the Cold War. (Orlandon Howard/U.S. Army) 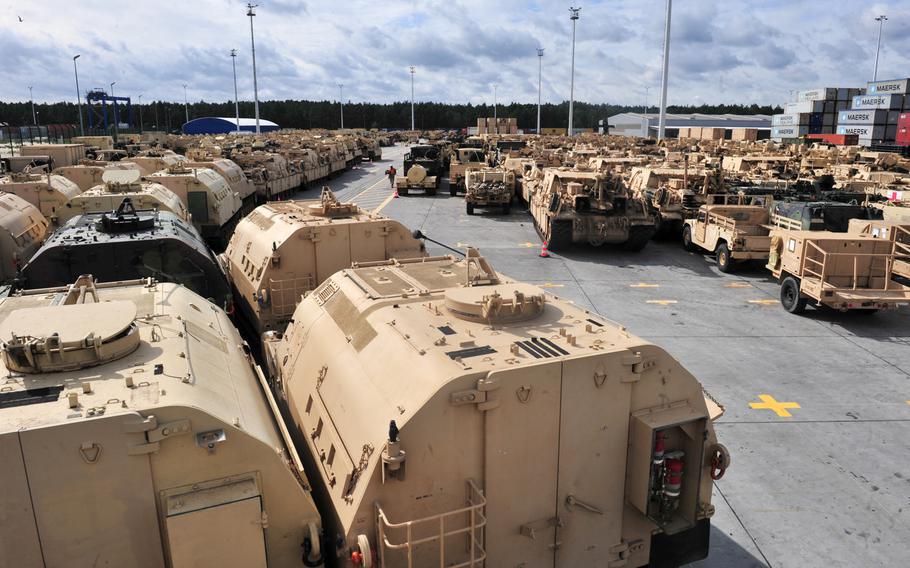 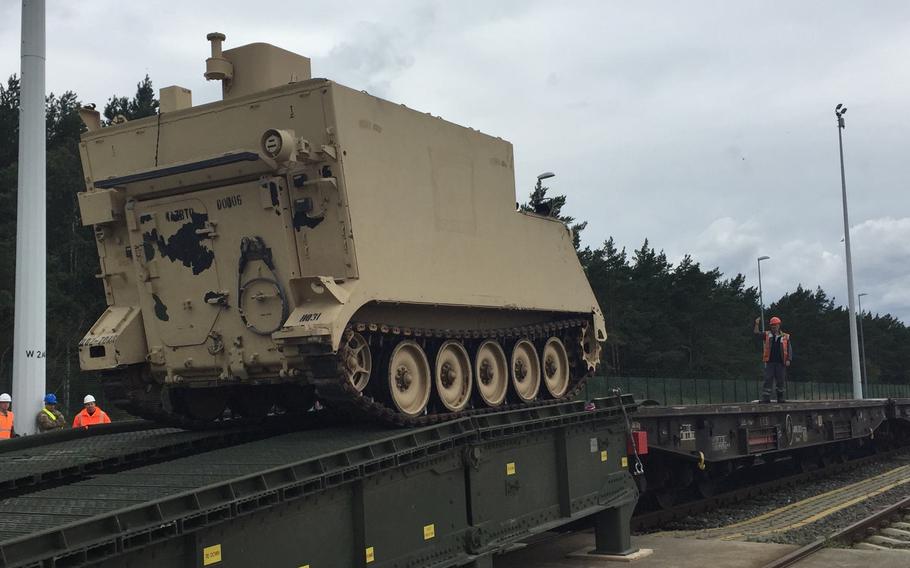 An M577 armored personnel carrier from 2nd Armored Brigade Combat Team, 1st Infantry Division, is driven up a mobile ramp on to a train at the Port of Gdansk, Poland, Sept. 14, 2017. The effort to move two Armored brigades - one to Europe, one back to the U.S. - is the biggest logistical Army effort in Europe since the Cold War. (Jacob A. McDonald/U.S. Army)

KAISERSLAUTERN, Germany — Soldiers hurried the Abrams tanks and Bradley fighting vehicles onto the cargo ship, and out of Beaumont, Texas, in the nick of time, narrowly missing the eye of Hurricane Harvey and landing in Poland two weeks later.

Waiting at the Baltic port of Gdansk, Poland, were a team of Army logisticians, armed with two mobile ramps — tank transporters that were built on the fly in a Kaiserslautern workshop in a flash of innovation inspired by operational necessity.

The current effort to simultaneously move two U.S. armored brigades — one to Europe and one back to the U.S. — is among the Army’s biggest maneuvers in Europe since the end of the Soviet Union.

The journey, challenged by two U.S. hurricanes that delayed the arrival of some gear to Europe by two weeks, forced the Army to improvise in ways that are now becoming essential for a force charged with pushing into NATO’s less familiar eastern edges, Army officials said.

“This is Reforger for us,” said Army Maj. Gen. Steven Shapiro, referring to Cold War-era exercises that involved thousands of troops near Germany’s old east/west fault line. “This is tens of thousands of pieces of equipment going in multiple directions.”

But the Army’s new Eastern Europe campaign has meant learning a new network of roads and bridges and ports previously untested by heavy armor.

On Friday, the newly arrived 2nd Armored Brigade Combat Team out of Fort Riley, Kan., will officially take over a Russia deterrence mission in Europe’s east, replacing the Fort Carson, Colo.-based 3rd Armored Brigade, which is now beginning to redeploy back to the U.S.

Managing that large-scale movement of forces has been U.S. Army Europe’s 21st Theater Sustainment Command, which had its planning for the past year pulled apart as hurricanes in the U.S. disrupted routes and delayed equipment arrivals. Transport deals with the German railroad had to be rejiggered; Europe-based manpower and gear were mobilized to fill gaps until the arrival of the rest of the 2nd ABCTs equipment.

Much of that equipment, initially bound for Germany’s port of Bremerhaven, was diverted to Poland.

Anticipating the need to operate in places like Gdansk, which lack port and rail infrastructure sturdy enough to maneuver Abrams tanks, the Army’s local technicians in Kaiserslautern, Germany, developed a contractible ramp that enables tanks to drive directly onto rail cars. The ramps can be operated by a two-man team and mobilized anywhere in Europe, Army officials said.

“It makes us more flexible. We want to use multiple ports,” said Shapiro, commander of the 21st TSC, who said the Army will probably need more such ramps.

Built in six weeks at a total cost of $10,000, the two ramps are a “low cost-high yield” solution, said Helmut Haufe, whose technicians at the 21st Theater Sustainment Command’s logistics support office built the platforms, which have helped tracked combat vehicles operate from the Baltics to Romania.

Haufe’s technicians, whose experience dates back decades, tapped into their institutional memory as they worked on broken-down vehicles offloaded in Poland.

After Russia’s intervention in Ukraine in 2014, the military turned its attention to Poland and the Baltic countries, which are worried about a more aggressive Russia. In that terrain, the Army had little to no experience operating in large numbers.

“We are rethinking everything right now,” Shapiro said.

Engineers, logisticians and maneuver leaders have spent much of the past two years building up binders with maps so the Army can mobilize heavy forces in the Baltics, Poland, Romania and Bulgaria. In the coming weeks, the Army will begin testing various routes in proof-of-principle exercises.

“We’re covering thousands of miles,” he said. “Now we are going to put tanks on it.”

As the mission has grown, the 21st TSC is developing a new maneuver cell, which will add 50 personnel and bolster the Army’s efforts to better manage the movement of its forces in Europe, Shapiro said.

For Shapiro, who was USAREUR’s chief logistician as a colonel in 2011 and 2012, the current mission is a shift from the recent past, when tanks and brigades were getting uprooted from bases in Germany as part of a force drawdown.