Army looks to give Stryker a facelift 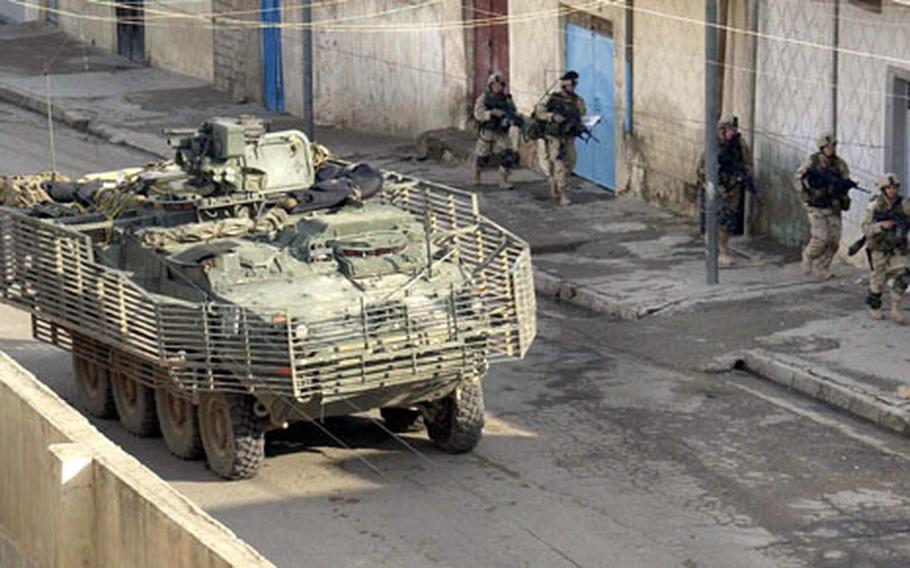 Soldiers have suggested small improvements that have already been made, such as new seat belts and interior hand-holds.

But there are larger issues still at stake, such as shaving the vehicle&#8217;s weight, its potential to rollover and trap soldiers, and whether the current &#8220;cage&#8221; armor is effective, critics say.

Army leaders recently attempted to change such impressions by holding a media video teleconference with a dozen Stryker commanders from four locations.

&#8220;Soldiers know this vehicle is not perfect, they do know and believe it&#8217;s the best vehicle available and they have it to use today,&#8221; Townsend, whose was the first Stryker Brigade Combat Team to deploy to Iraq, in October 2003, said during the roundtable.

Commanders at the 172nd Stryker Brigade Combat Team, which is due to go into the country next summer, are busy using lessons learned from the first Stryker brigade in Iraq, brigade commander Col. Michael Shields said during the roundtable.

The lessons learned from their predecessors &#8220;are really helping,&#8221; Shields said.

Many of the lessons are simple, such as the need for additional handholds welded inside the Stryker.

Commanders in Iraq also realized that the original seat belts were not long enough to accommodate a soldier wearing the new individual body armor and other bulky items on his person.

With the seat belts uncomfortably tight, soldiers simply were not strapping in while the vehicle was moving, commanders said, increasing the danger during collisions, explosions or rollovers.

With new seat belts, the problem has been solved, Fuller said.

Commanders in Iraq also determined that the Stryker&#8217;s &#8220;bird cage&#8221; slatted armor was not making the common armored vehicle issue of rollovers, even worse.

The armor, designed to defeat rocket propelled grenades, acts like a baseball catcher&#8217;s mask: the explosives bounce off or do damage to the armor, not the vehicle.

The cage armor also is sufficiently effective to withstand most improvised explosive devices, or IEDs, and RPGs, another question raised by critics in the past, Army leaders said.

Lt. Col. Gordie Flowers, commander of 2nd Battalion, 3rd Infantry Regiment, said during his year in Iraq, more than 50 percent of his Strykers were hit with rocket propelled grenades and IEDs, &#8220;the No. 1 and No. 2 weapons used against us,&#8221; with no resulting fatalities.

The slat armor may be effective, but at 4,500 pounds, it does unquestionably and significantly add to the Stryker&#8217;s basic 19-ton weight.

And weight remains a serious issue for the Stryker brigade, which Army planners originally said would have the capability of deployment by C-130 transport aircraft, anywhere in the world within 96 hours.