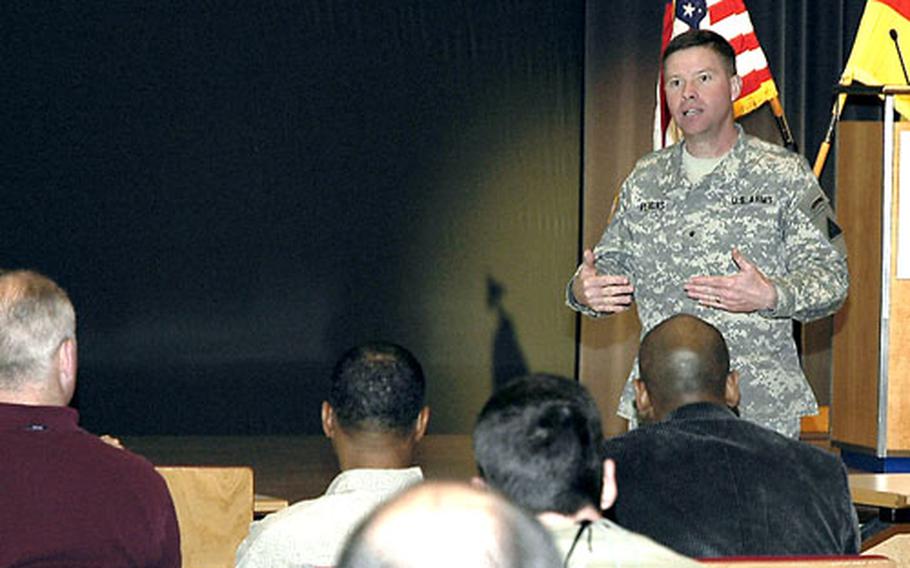 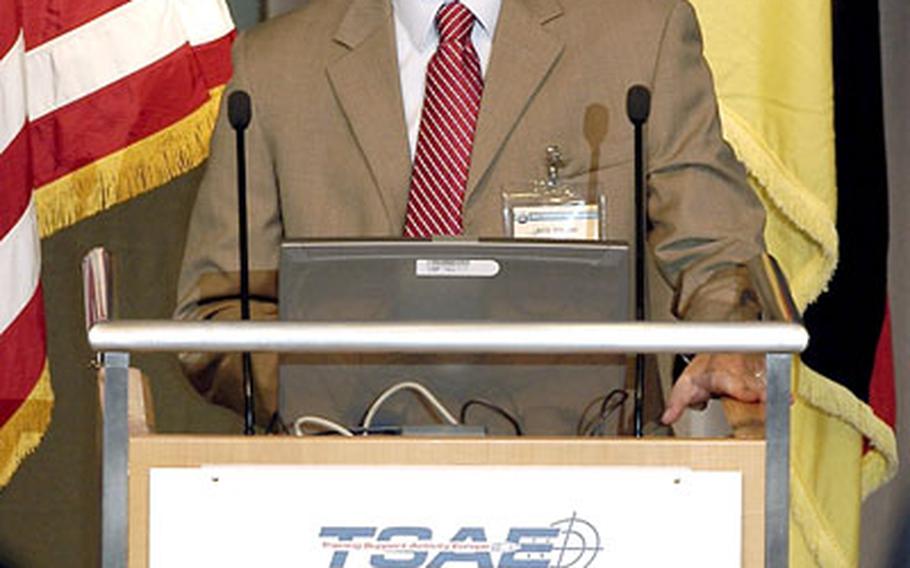 Nate Whelan, Integrated Training Area Management director, says the Army is looking at areas for the Stryker to maneuver and train that are currently off-limits. (Steve Roark / Courtesy of U.S. Army)

Providing enough training room for the ultra-mobile, eight-wheeled vehicles was one of several topics discussed at a workshop in Amberg this week, according to Nate Whelan, the U.S. Army Europe Integrated Training Areas Management program manager.

An undisclosed number of 2nd Cavalry Regiment Strykers are due to leave Fort Lewis, Wash., in June to join the Stryker brigade&#8217;s 3,100 soldiers, who are arriving at Vilseck this month.

&#8220;The thing about the Stryker vehicle is it is very land hungry and very maneuverable,&#8221; Whelan said. &#8220;We are researching where the vehicle can go. We are looking to open up more maneuver space.&#8221;

&#8220;There is not space for that (at U.S. training areas in Europe), but we have found a lot of creative solutions (including) using other host-nation training areas,&#8221; Whelan said.

Whelan said the Army also is looking at areas that are currently off-limits.

&#8220;Some places where there are stakes in the ground, that used to be tree nurseries, for example. The stakes might be pulled out and the areas opened up for maneuver,&#8221; he said.

The Integrated Training Areas Management program, with a $5 million annual budget, has more than 100 projects under way on U.S. training areas in Europe, he said.

&#8220;Seventy percent of the projects are land rehabilitation such as erosion control and repairing areas that have been used for training,&#8221; he said.

The other 30 percent involve developing databases, Whelan said. &#8220;We are also looking at building databases for forward operating sites in Bulgaria and Romania (which the U.S. recently negotiated agreements to use for training),&#8221; Whelan said.

Another person who attended the Amberg workshop, USAREUR Range and Training Land Program manager Steve Kennedy, said the unofficial theme of the meeting was the impact of transformation on range infrastructure in Europe.

&#8220;We are transitioning from a heavy centric force with a lot of tanks and Bradley fighting vehicles to a more infantry-centric force,&#8221; Kennedy said. &#8220;We have to reconfigure the ranges that were set up for Bradleys and tanks to support the Strykers and the (Vicenza, Italy-based) 173rd Airborne Brigade.&#8221;

Grafenw&#246;hr, for example, already has received funding for an urban assault course, to be built in 2006. An instrumented shoot house with cameras and high-tech after-action review facilities would soon be built, and a tank range will be converted to a sniper range in 2008, he said.

Other participants in the workshop included personnel from the Department of the Army&#8217;s training section, USAREUR&#8217;s Department of Public Works, Training and Support Activities Europe and the Integrated Training Area Management office, U.S. Army Corps of Engineers as well as German Forest Service representatives and environmental and construction engineers, he said.