Army life wish list drawn up at conference on Okinawa 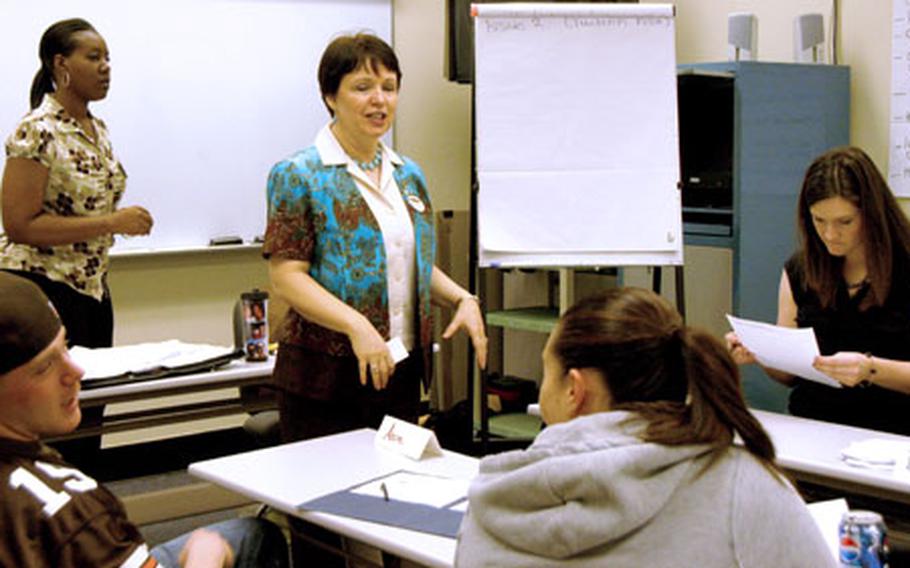 TORII STATION, Okinawa &#8212; Centralizing access to Tricare medical coverage, increasing dwell time between deployments and greater notice of upcoming duty assignments are among a list of recommendations soldiers and their families are hoping the Army will consider.

"There&#8217;s accountability within the process," she said.

Delegates presented the top 13 issues and recommendations to garrison commanders on the final day of the conference Thursday.

On the list were providing alternative exercises for injured soldiers to perform during physical fitness testing, increasing job opportunities and nighttime activities for teens, and implementing alternate deployment schedules for married servicemembers with children.

Delegates, chosen by unit commanders and supervisors, expressed concern about the effect having two family members deployed simultaneously can have on the re-integration process, and that overall, soldiers need more downtime between deployments to regroup and be with their families, Coubrough said. Delegates also said more emphasis is needed on services available to soldiers coping with post-deployment trauma.

In all, 61 issues were submitted by community members for consideration, Coubrough said. Many of the issues involved matters that could be addressed by forwarding them to the correct service provider.

Army Sgt. 1st Class Marlowe Rooks of the 1-1 Air Defense Artillery Battalion served as a delegate for the family, children and youth support services workshop. For Rooks and the rest of the workshop, increasing notice of a permanent change of station from 90 days to a minimum of 120 days was suggested as a means to ease the burden of families having to quickly uproot.

The resolution was among the group&#8217;s top three, Rooks said.

Issues that cannot be resolved at the local level will be forwarded to the United States Army Pacific for review, she said.

The conferences lead to successes, Coubrough added. One indication is that for the first time in at least four years, child care issues were not raised.

She said AFAP has worked with Kadena Air Base to accommodate families with deployed spouses and offer discounted child care to alleviate hardship.

"It&#8217;s remarkable that we&#8217;ve made this sort of progress because child care is always a big issue," Coubrough said.