Army leaders pitch in to get holiday mail delivered in Korea 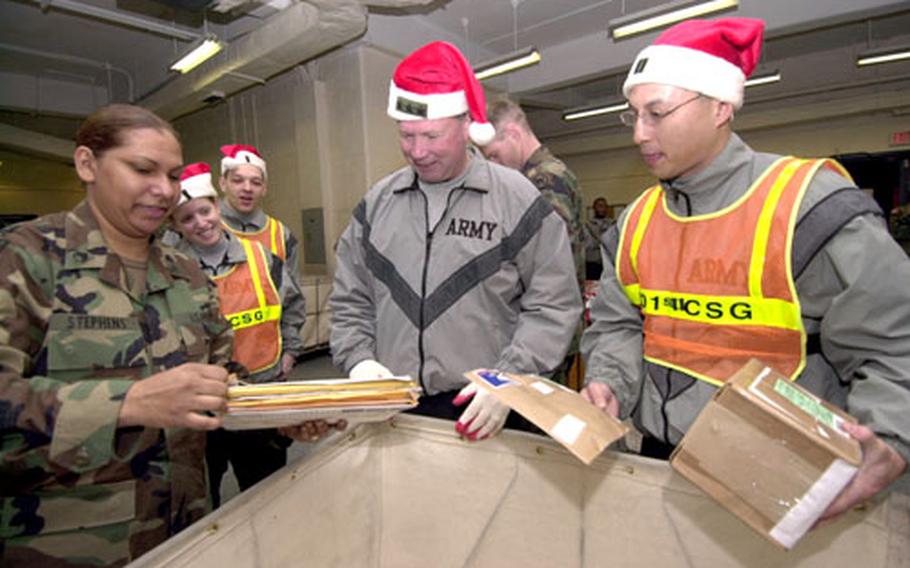 It&#8217;s an annual event and one that the soldiers enjoy, said Spc. Tyler Watson, a three-year Army veteran.

Gregory Mackessy, chief of Postal Operations at the 8th Army&#8217;s G-1, said postal workers across the peninsula do a great job during the holiday season, when the volume of mail spikes from roughly 1.2 million pounds to about 1.8 million pounds a month.

He also said postal officials will run the annual &#8220;Operation Santa Claus,&#8221; a last-minute push to ensure all mail that arrives to Gimpo Airport by 3 p.m. Saturday makes it to the customers on Christmas Eve.

&#8220;It&#8217;s basically to make sure to the best our ability that every soldier, sailor, airman and Marine and their family members get their Christmas presents,&#8221; he said.

&#8220;We&#8217;ll bring the leadership in here&#8221; to work the late shift Saturday to give as many young troops as possible the time off to enjoy the holiday.

Campbell talked with many of those soldiers as they prepared to unload the truck.

Wednesday&#8217;s load was light and the VIPs quickly helped move the mail onto to conveyor belts as Christmas carols played over the intercom system.

Before leaving, Campbell thanked the soldiers for their hard work.

While they &#8220;often toil without accolade,&#8221; he said, the soldiers should understand how important they are to the military community for serving as a bridge to friends and loved ones.

Watson said working a shift for &#8220;Operation Santa Claus&#8221; is worthwhile if he can help his fellow soldiers.