Army laying out plans for more helicopter missions in Europe 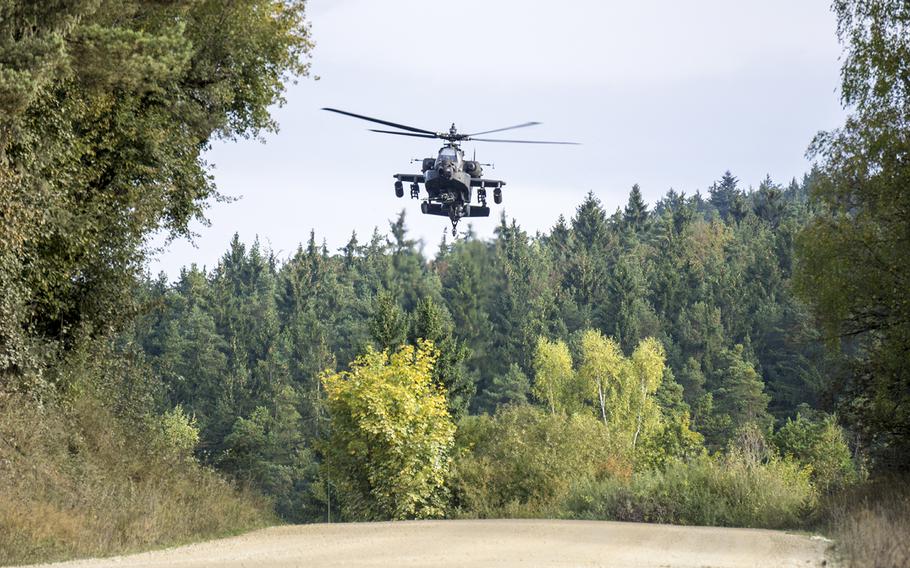 U.S. Army Europe’s aviators and their European counterparts are aiming to get more helicopters in the air for upcoming war games, increasing the profile of Army airpower in a training regime that has long focused mainly on ground forces.

USAREUR’s 12th Combat Aviation Brigade hosted 21 NATO and partner nations for three days of talks at Edelweiss Lodge and Resort in Garmisch, Germany, where the focus was on bridging language barriers, sharing tactics and finding opportunities for closer collaboration.

“There was an obvious need to get the helicopter community together to talk about this stuff,” 12th CAB commander, Col. Christopher Waters said Thursday.

The gathering was meant to build on an inaugural gathering held by 12th CAB in March. That session included 16 countries and involved mainly briefs about individual nation capabilities. Now, the focus was confronting tactical challenges of operating together and finding ways to intensify the pace of training initiatives, Waters said.

The biggest challenge? “Communications, far and away,” he said.

While most allies speak English, military jargon that is key for aviators dosen’t always translate. When a U.S. Army helicopter pilot says Bingo, meaning running out of fuel, that could mean something different to a Czech pilot participating in the same operation, Waters said. Also, allies face problems with ensuring secure communications between nations.

The issues range from technical challenges to national caveats of some nations, which restrict when encrypted communication can be used. “Those are real world obstacles to training — if we are going to train like we are going to fight,” Waters said.

The meeting in Garmisch comes ahead of a USAREUR-hosted conference in two weeks that will help chart the training course for land forces in the year ahead. The hope, Waters said, is that army aviators from across Europe will inform their respective leaders of the need to incorporate more aviation into training.

The focus on bolstering aviation in Europe comes one year after an Army-wide reorganization downsized the Ansbach, Germany-based-12th CAB, resulting in the loss of about 25 Apache attack helicopters, various other choppers and 1,900 troops. The Army aviation plan now relies on rotational forces in Europe to fill the gaps. So far, that has meant 9-month rotations of an attack helicopter battalion. In March, an aviation brigade from the 10th Mountain Division also will rotate to Europe, beefing up capabilities.

Ilesheim, Gemany, will serve as the rotational CAB’s headquarters, and the brigade’s units will be forward-based at locations in Latvia, Romania and Poland as part of the Atlantic Resolve campaign, which aims to reassure NATO allies in the east and deter a more assertive Russia.

Acquiring more combat aviation capabilities has been a top priority for USAREUR leadership.