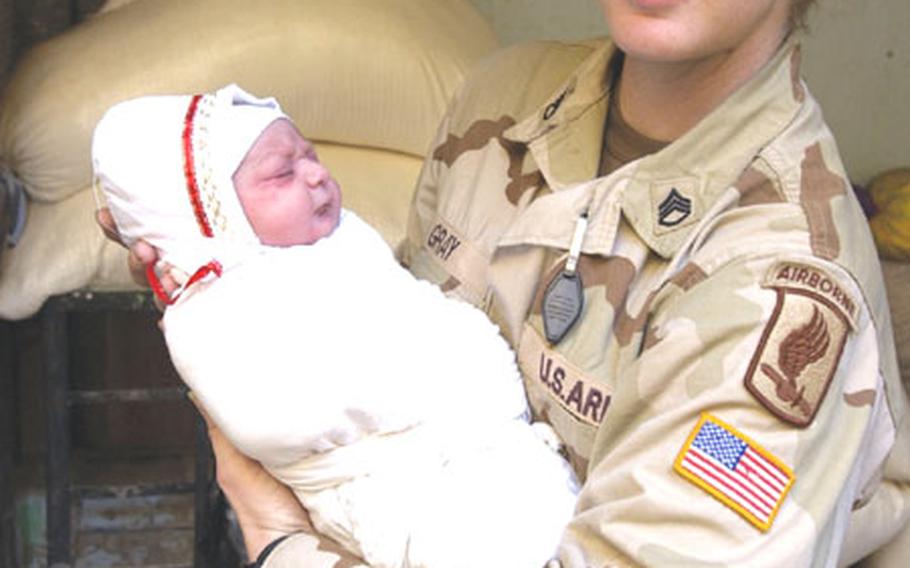 As an Army journalist based in Vicenza, Italy, she&#8217;s spent the past five months filing segments on the 173rd Airborne Brigade in Iraq. But the camera stopped rolling for an hour or so last month when Gray was told to investigate a room in a Kirkuk home that members of the 2nd Battalion, 503rd Infantry Regiment were searching for contraband.

She was called in because the men of the household said a sick woman was inside and refused to allow the male soldiers to enter. Gray, armed and in full battle gear, entered the room expecting trouble. But she didn&#8217;t find any weapons.

Instead, a young Iraqi woman was lying on the concrete floor, struggling to give birth.

Meanwhile, the baby was ready to be born.

But the mother, giving birth in the room because the family was too poor to seek aid at an Iraqi hospital, was badly bleeding and having trouble expelling the placenta.

The other two Iraqi women, who had no medical training and didn&#8217;t speak English, obviously needed help, Gray said. So, through a shouted conversation with the translator on the other side of the door, she preceded to take out the afterbirth.

Gray has no formal medical training, other than what soldiers receive at basic training. But she gave birth three years ago to a son, Tyler. And she&#8217;s always been interested in the medical profession.

But being a female soldier was more than enough this time.

&#8220;She was in a lot of pain,&#8221; Gray said of the new mother. So she convinced the women to let her call in a male medic to help. Spc. Anthony Duarte was then brought in to provide care and administer a painkiller.

Gray, who said she&#8217;s seen plenty of death in her stint in Iraq, got to hold Zuher Ahmed Mohowed for a few minutes before the soldiers left.

Gray said the soldiers were told the family didn&#8217;t like Americans. At least they didn&#8217;t until the search-turned-medical rescue.