Army is among biggest employers in Bavaria 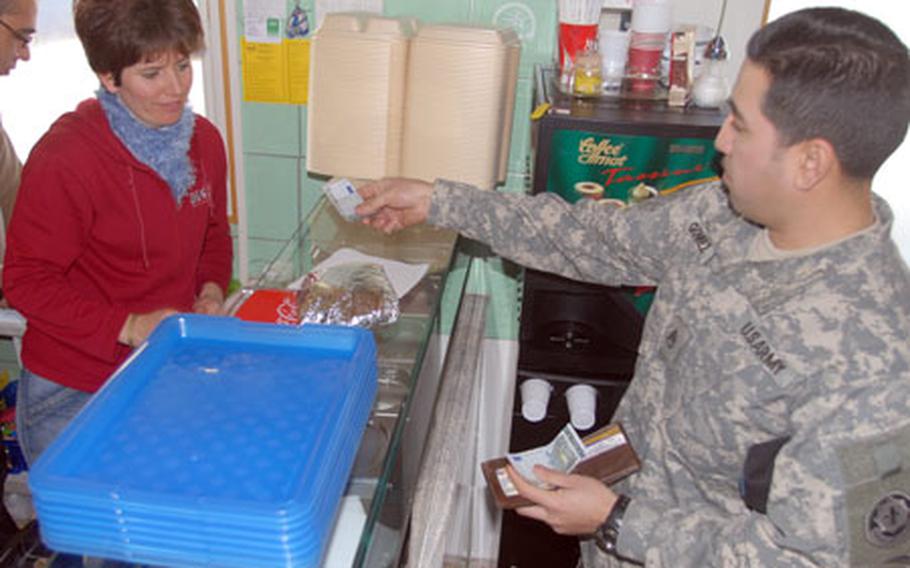 GRAFENW&#214;HR, Germany &#8212; The U.S. Army is the third-largest employer in Bavaria when troops from other parts of Europe come to train at Grafenw&#246;hr and Hohenfels, according to data released by the Joint Multinational Training Command.

Green uniforms are a regular feature at lunch time in the Ararat kebab stand just off post near Grafenw&#246;hr&#8217;s Gate 1. Ararat owner Armen Oganesian, an Armenian, said Americans account for about one-half of his customers.

Locals say the Army is by far the most important industry in the Oberpfalz region that surrounds the U.S. bases at Grafenw&#246;hr, Vilseck and Hohenfels and takes in the larger nearby towns of Regensburg, Amberg and Weiden.

&#8220;[The U.S. military] is a priority. This region doesn&#8217;t have big industrial firms like Siemens. The biggest advantage for the region is the U.S. forces,&#8221; said Grafenw&#246;hr software designer Gerhard Pfenning.

Pfenning said he makes some profit from advertisements sold on the Web site but that he started it as a hobby and to help Americans new to the region.

&#8220;I was born here and know the good places to see. There are a lot of Americans coming, and I thought they need a lot of information about German culture and where to find things,&#8221; he said.

Schemnner said he wants to find out where Americans shop &#8212; on post, off post or on the Internet &#8212; so he can write a thesis as part of his economic geography studies at the nearby University of Bayreuth.

Joseph Karl, public affairs chief for the Oberpfalz Administrative District, said the construction industry in Bavaria is benefiting from the military buildup at Grafenw&#246;hr.

The local industries that benefit the most from the U.S. presence include car sales, tourism, restaurants and food, he said.

Rainer Pappenheim, a press officer for the Bavarian Staatskanzlie (Chancellery), said official German figures show the U.S. Army employs 5,800 Germans in Bavaria (slightly less than the 6,049 quoted by the Army as working at Grafenw&#246;hr, Vilseck, Hohenfels and EBG).

The Army&#8217;s most significant impacts are in the construction sector, catering industry and shopping centers, but the impact is also not quantifiable, he said.

About 20,000 Americans live off post in Bavaria &#8212; more than the number of U.S. soldiers stationed here. And there are many U.S. civilian employees and retirees who live in the region, he said.

nThere are 1,402 U.S. military members stationed in Grafenw&#246;hr, but that number is expected to triple over the next few years. There are also 1,347 German employees at the base, 2,925 family members, 284 U.S. civilian employees and 467 contractors at the base.

nEfficient Basing Grafenw&#246;hr, a $1 billion construction program to expand the base, involves 14 German companies employing 3,300 workers. The base has room for almost 12,000 more troops from other parts of Europe at camps Aachen, Algiers and Normandy during training cycles.

nThe Department of Defense spent 248 million euros (about $332 million) on its German workforce in Bavaria in fiscal 2005, along with 116,000 euros to pay 60 percent of the cost of a German apprentice program at Grafenw&#246;hr.

nOther data released by the Joint Multinational Training Command shows U.S. forces for the whole of Germany employed more than 20,000 locals last year making them the fourth largest U.S. employer of Germans in the country after McDonald&#8217;s (50,000 German employees), Ford (25,000) and Opel (24,200).