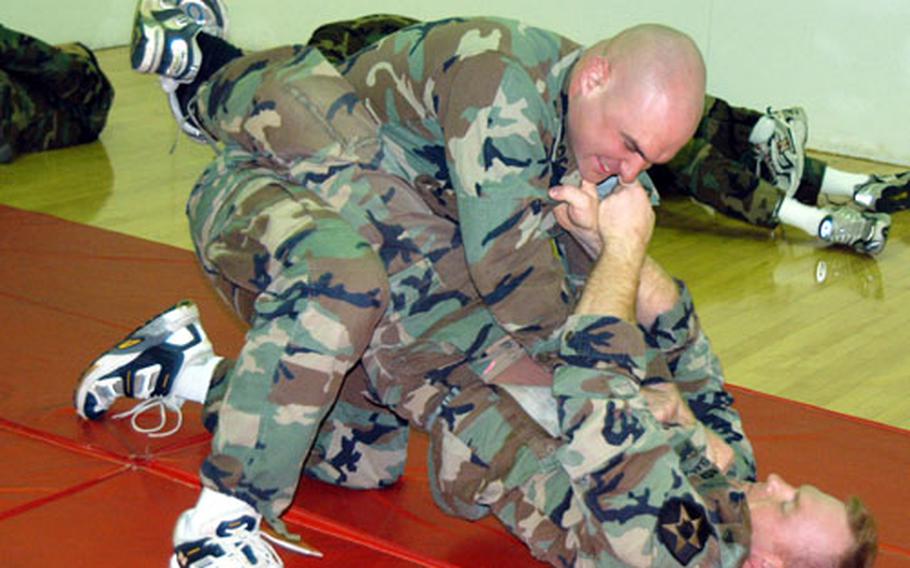 Sgt. 1st Class Cliff Owens, a qualified instructor in U.S. Army unarmed-combat skills, runs a weekly class here for soldiers from the 2nd Infantry Division. And though he said Area I soldiers train an hour each week in compulsory tae kwon do, they hardly ever practice official unarmed-combat techniques.

Tae kwon do, South Korea&#8217;s national sport, is a good way to maintain physical fitness but not a particularly effective way to engage the enemy on the battlefield, he said.

The Army system, which combines Brazilian Ju-Jitsu and Muay Thai kickboxing, provides the skills that soldiers unable to access their weapons need to defeat one or more opponents in a no-holds-barred, hand-to-hand fight, he said. It involves throws, punches, kicks, choke holds and arm bars.

During training, soldiers wear gloves but de-power their punches, only striking to distract opponents or remind them to keep their guards up.

Owens only teaches throws once soldiers have mastered the other techniques because of the injury risk, he said.

Camp Red Cloud fighters train on a racquetball court in winter and outside in summer. Most is done on hard surfaces because the CRC gymnasium only has four floor pads.

Owens said there should be a facility equipped with fighting mats at every base.

Army combatives are more important than ever for soldiers deploying to Iraq or Afghanistan, he said.

&#8220;If some guy comes running out of a hut in Iraq and attacks you, these techniques can save your life,&#8221; he told a group of soldiers practicing unarmed combat recently. &#8220;Because of the political realm we are operating in, it is not good to go in and kill everybody. We don&#8217;t want to end up on Al-Jazeera as baby killers because we had a 13-year-old kid come at us and we shot him instead of taking him out [using unarmed-combat skills].

&#8220;In Iraq now, where you have angry crowds with weapons, it is not like you can turn a [machine gun] loose on them. This is the stuff to subdue people with nonlethal force.&#8221;

Owens said the Army system is similar to the mixed martial-arts techniques used in the Ultimate Fighting Championship or the Japanese Pacrease tournament. It&#8217;s proven itself in combat, he added.

&#8220;One of the instructors was in Afghanistan last year clearing buildings and a mujahedeen jumped on him. He had to get him off his back and he ended up breaking the guy&#8217;s arm,&#8221; Owens said.

Many of the soldiers studying unarmed combat already have some martial-arts training.

&#8220;A lot of my KATUSAs, even though they are small, have the striking background, so this rounds them out. Then you get guys who are ex-wrestlers and you teach them the striking techniques, and it makes them a complete fighter,&#8221; Owens said.

What do the soldiers think about it?

Sgt. 1st Class Scott Steiman said the fighting system was much more effective than tae kwon do, which he described as &#8220;a bunch of pretty kicks.&#8221;