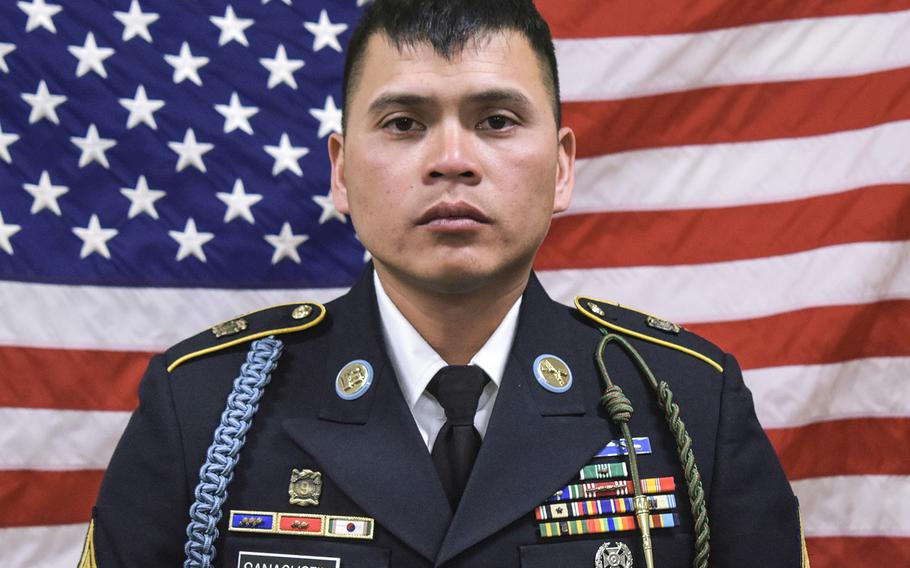 The Pentagon on Wednesday identified the second soldier who died this week in Afghanistan as Staff Sgt. Diobanjo S. Sanagustin.

Sanagustin, 32, from National City, Calif., died Tuesday from a noncombat injury at Bagram Air Field, the military said in a statement.

After joining the Army as an infantryman in May 2007, Sanagustin deployed three times — once each to Kosovo, Iraq and Afghanistan. The 11-year Army veteran arrived at Fort Carson, Colo. in January, where he was assigned to 4th Battalion, 9th Infantry Regiment, 1st Stryker Brigade Combat Team, 4th Infantry Division.

“He made a lasting impact on the Manchu formation and we will forever cherish his memory,” Uthlaut said in a statement. “Our deepest condolences are with the Sanagustin family.”

He was the seventh U.S. fatality in Afghanistan so far this year and the first noncombat death. Noncombat deaths include those caused by accident, illness, self-inflicted injury or homicide not caused by the enemy.

Of the 16 total noncombat deaths in Afghanistan since the start of Operation Freedom’s Sentinel, the U.S. mission in Afghanistan that began after the withdrawal of most combat forces in December 2014, 11 have been the result of accident, according Defense Casualty Analysis System data.

Sanagustin’s death follows the slaying a day earlier of a soldier in an apparent insider attack in Logar province on Monday. The Pentagon identified that soldier as Command Sgt. Maj. Timothy Bolyard, a 24-year veteran of the service.

Bolyard was shot by an Afghan police officer in Logar province and later died of his wounds. The military said his attacker was taken into custody.

Both incidents are under investigation, the military said.