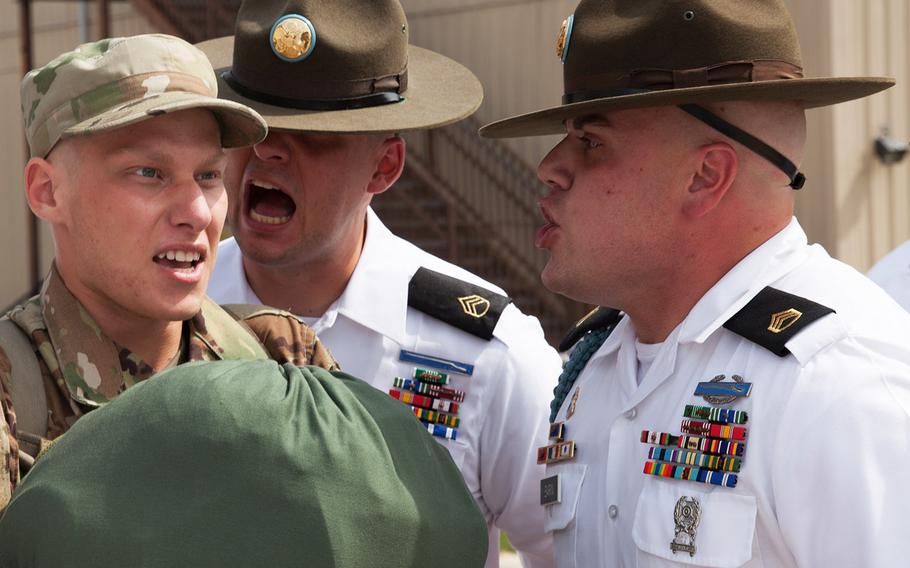 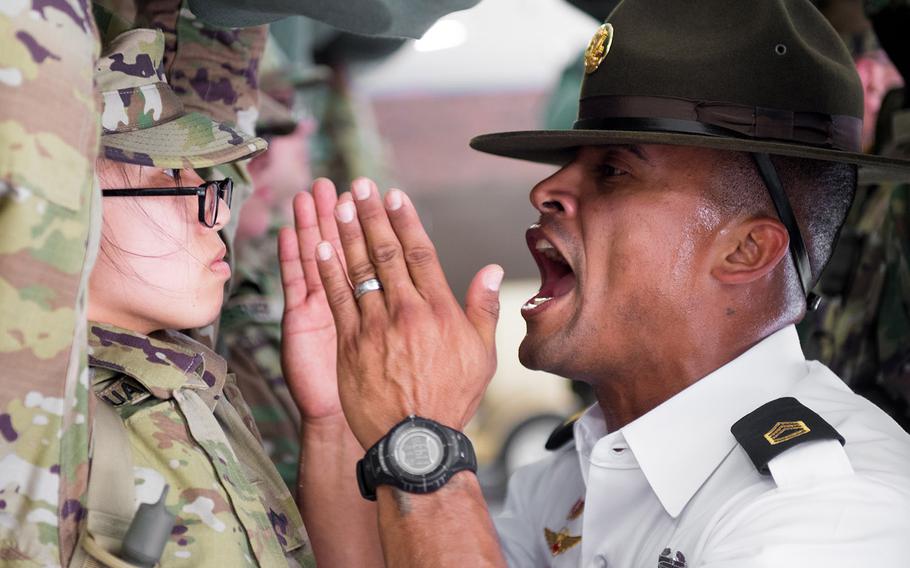 A U.S. Army drill sergeant assigned to the34th Infantry Regiment uses the "shark attack" method on a recruit during basic training on June 12, 2017, at Fort Jackson, S.C. The Army says it will no longer shout in recruits' faces and use intimidation to establish authority and weed out the weak during basic training. (Darius Davis/U.S. Army)

Infantry recruits will no longer have drill sergeants barking orders at them inches from their faces during basic training as the “shark attack” technique, which uses intimidation to establish authority and weed out the weak, is dropped in favor of a new approach.

The Army’s Infantry School at Fort Benning, Ga., said it’s switching from the “Full Metal Jacket,” in-your-face practice to one called “The First 100 Yards,” which seeks to develop mental and physical toughness, instill pride in the infantry, and build trust among recruits and their leaders.

The coronavirus may have hastened the switch, since the pandemic has ended up-close shouting by instructors at basic training. Trainers and recruits in all the services wear face masks and maintain social distancing during basic training, and even Navy special warfare instructors yell through megaphones these days.

But “The First 100 Yards” is also “a complete rewrite of what was commonly referred to as the ‘Shark Attack,’” Command Sgt. Maj. Robert K. Fortenberry, the infantry school’s senior enlisted leader, said in an online commentary earlier this month.

While the shark attack was intended “to establish dominance and authority using intimidation and fear, to weed out the weak of heart,” it helped to create “a chaotic environment that centered around applying physical exertion under stress,” Fortenberry said in a video made for a virtual warfighter conference.

The video showed angry-looking drill sergeants in wide-brimmed hats swarming around and yelling at Army recruits.

“Drill sergeants were charged with assessing the trainee’s ability to handle stress … by enveloping them in a manner that emulated a shark attack,” Fortenberry said.

Sometimes, half a dozen drill sergeants would “gang up on you and be absolutely relentless,” causing some recruits to cry, said James Dalman, who was infantry in the Army Reserves and National Guard for six years, on his website.

Although the shark attack method was “mean, nasty, and overwhelming,” and a “deeply unpleasant experience, it does serve an important purpose — preparing troops for stressful situation including combat,” he said.

But Fortenberry said the activity “betrays the innate trust between teammates, and worse, betrays the crucial bond of trust with our leaders.”

The new training program, on the other hand, uses physical training to prepare for the new Army Combat Fitness Test and puts recruits through mock exercises, including working with other trainees to move a load of supplies on the fly, just as they might have to do in an actual combat zone, the Army said.

In “The First 100 Yards,” the drill sergeant and other training cadre formally introduce themselves to the trainees instead of shouting in their faces, and then watch an Infantry Demonstration Squad showcase their combat skills, a video about the new technique shows.

Trainees will have to memorize facts about the infantry and their new units, including names and positions of leaders, the unit’s history and mottos.

The new method will allow new soldiers “to realize this journey in the infantry is one that we’ll never take alone, and it is defined by leaders’ willingness to share in the hardship,” Fortenberry said.