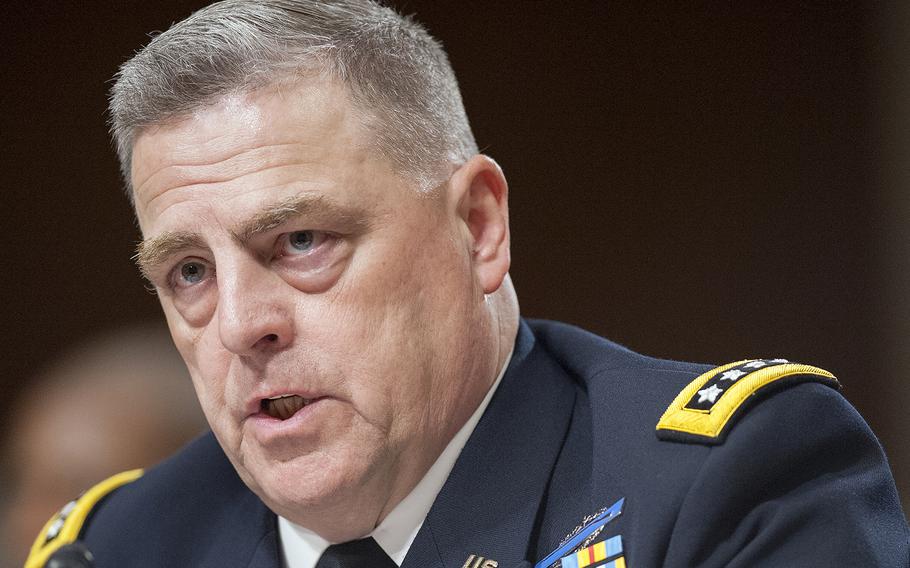 Buy Photo
Chief of Staff of the Army Gen. Mark Milley testifies on Capitol Hill in Washington, D.C., on Thursday, April 7, 2016. Milley warned lawmakers on Wednesday, June 7, 2017, that the Army needs to increase its combat readiness more than it needs more soldiers. Only about one-third of the Army’s combat units are prepared for war now, he said. (Carlos Bongioanni/Stars and Stripes)

WASHINGTON — The Army would like more soldiers, but only if Congress provides ample funding to train them properly, the service’s top general said Wednesday, warning that insufficiently prepared troops would lead to a “hollow Army.”

The Army’s $166.1 billion fiscal year 2018 base budget request called for maintaining 476,000 active-duty soldiers authorized by Congress for 2017 because the service is primarily focused on building the combat preparedness of that existing force, Gen. Mark Milley, the Army chief of staff, told the Senate Appropriations subcommittee for defense. The Army expects to reach 476,000 troops by adding about 10,000 soldiers by October.

“In this budget, we have asked to flat line the end strength in the base budget,” Milley said. “However, if more money became available and we were able to make sure we could maintain the readiness, we do have an additional request … which would increase the end strength capacity of the force.”

But Milley warned lawmakers that the Army needs to increase its combat readiness more than it needs more soldiers. Only about one-third of the Army’s combat units are prepared for war now, he said. The goal is for two-thirds to be prepared at any given time.

“A hollow force only puts the Army and the nation’s security at risk,” Milley said. “Combat is very unforgiving and it is even more unforgiving on armies that are not manned, trained, equipped and well-led.”

The Army remains the busiest of the military services, Milley said. There are some 180,000 soldiers deployed in about 140 countries across the world. The Army fills roughly half of all combatant commanders’ requests for troops and provides 70 percent of the personnel who respond to unexpected emergencies across the globe, he said.

And that burden could grow.

Milley told Sen. Lindsey Graham, R-S.C., that he supported adding additional troops to Afghanistan. The White House is weighing whether to send up to 5,000 more troops to the 8,400 now deployed in support of the 16-year war there. The bulk of additional troops would likely come from the Army.

“The bottom line … is in the next decade, I see the demands on the Army as more not less,” Graham said.

But he and other senators were critical of Trump’s budget request, which increased defense spending by about $54 billion but significantly cut social programs and funding to other departments, including the State Department.

Graham was particularly critical about the cut to diplomacy or “soft power.”

“Therein lies the problem with this budget,” he said. “I appreciate the increase in defense [spending], but the cuts … are real and they will affect the ability of this nation to defend itself, too.”

“The conduct of war is not just a military undertaking,” the general said. “Armies don’t go to war. Nations go to war. For the United States, it is a whole-of-government approach of not only the military forces, but we need the State Department, the CIA, the FBI, [the Department of] Commerce.”