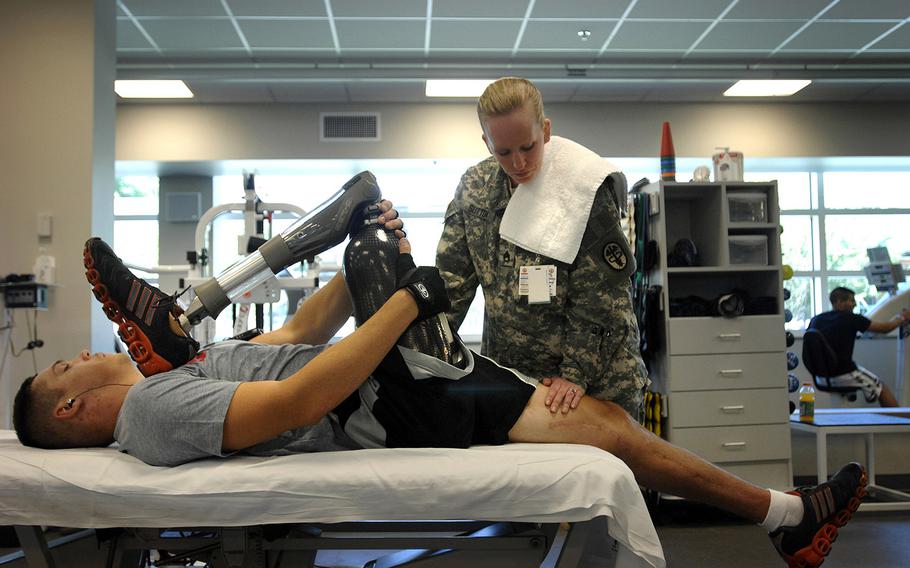 Army Spc. Brent "Hoss" Hendrix stretches with the help of Staff Sgt. Sara Sutton, a physical therapy technician at Walter Reed Army Medical Center. Soldiers there now collaborate with doctors, case managers, occupational therapists, specialty care providers on a comprehensive transition plan that maps out goals that are needed for the soldier to successfully transition either back into the Army or into civilian life. (Fred W. Baker III/Department of Defense)

Army Spc. Brent "Hoss" Hendrix stretches with the help of Staff Sgt. Sara Sutton, a physical therapy technician at Walter Reed Army Medical Center. Soldiers there now collaborate with doctors, case managers, occupational therapists, specialty care providers on a comprehensive transition plan that maps out goals that are needed for the soldier to successfully transition either back into the Army or into civilian life. (Fred W. Baker III/Department of Defense) 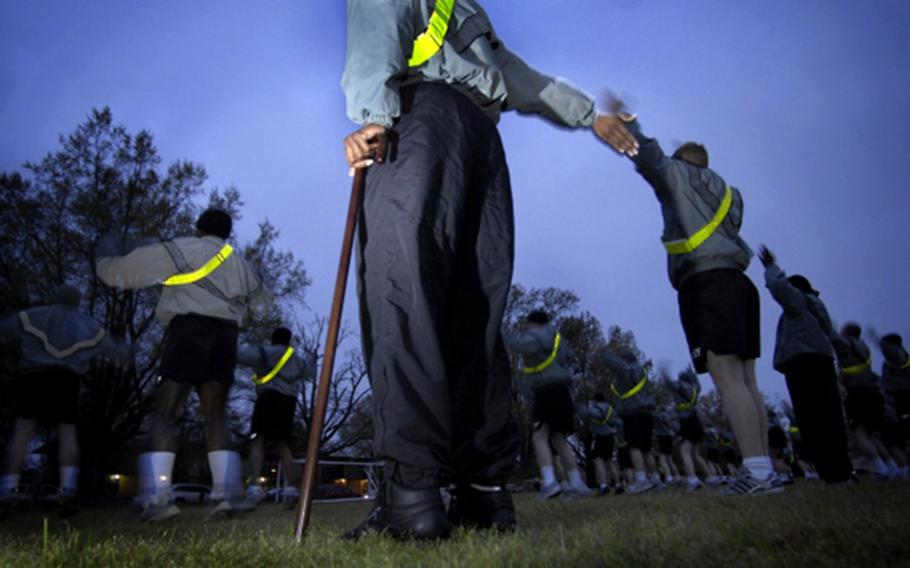 Soldiers assigned to the WTB participate in morning physical training. The Soldiers are recovering from wounds and injuries suffered in the line of duty. (Courtesy U.S. Army)

WASHINGTON — With the pace of U.S. operations in Afghanistan slowing and fewer wounded troops coming home, the Army said Thursday it would eliminate some of the special units for soldiers who need long-term medical care and rehabilitation.

The Army plans to inactivate five of its 29 active-duty Warrior Transition Units by the end of September.

In the wake of a scandal over poor living conditions for some wounded warriors, the units were set up in the United States and Europe in 2007, designed to oversee care for those who need at least six months of recovery time before returning to their Army jobs or transitioning to the civilian world.

The units to be inactivated are at Fort Irwin, Calif.; Fort Huachuca, Ariz.; Fort Jackson, S.C.; Joint Base McGuire-Dix-Lakehurst, N.J.; and at the U.S. Military Academy at West Point, N.Y.

The units slated to disappear are ones that have shrunk significantly as the character of the war in Afghanistan has changed. The largest of the units had 36 troops as of last week, and most had fewer than 10, all of whom will be moved to other units, Bishop said.

“Soldiers and their families assigned to these WTUs will undergo a deliberate transition process,” Bishop said. “They will remain at the center of our focus and will continue to receive care and transition assistance.”

Guard and reserve soldiers transitioning into the new Community Care Centers will remain in their homes and will continue to receive care through the Tricare network, Army officials said. Unlike the current CBWTUs, the new units will all be located on Army bases alongside existing Wounded Warrior Battalions.

Bishop said bringing WTUs and CBWTUs closer together would both simplify administration and allow the units to take advantage of base command structures and installation support systems. But, he said, the Army is aiming for the new structure to be as transparent as possible to soldiers, who will “as much as possible, have the same experience.”

The changes come at a time of dramatically falling numbers of dead and wounded following the end of the war in Iraq and the drawdown of troops in Afghanistan. There, Afghan troops are increasingly taking the lead in combat operations in preparation for the official end of Operation Enduring Freedom on Dec. 31.

That year, following a serious scandal over poor conditions for wounded warriors at Walter Reed Army Medical Center in Washington, the Army established Warrior Transition Units in an effort to improve care for soldiers who need long-term recuperation.

Then-Defense Secretary Robert Gates fired Army Secretary Francis J. Harvey in March 2007 as a result of the Walter Reed scandal, while the Army replaced Lt. Gen. Kevin C. Kiley — a former commander at the medical center who stepped in after the scandal broke — just a day after he was named temporary commander.

While WTUs are structured similarly to traditional Army units, soldiers assigned to them spend their time on going to medical appointments, doing physical rehabilitation, meeting with behavioral health therapists, playing sports and doing other activities designed solely to aid in recovery.

The units themselves have not been without controversy, with press accounts highlighting problems such as over-medication, disrespectful treatment by NCOs, depression and idleness. The Army has pushed back against such characterizations, however, citing a survey at the Fort Carson Warrior Transition Unit — singled out in a New York Times article — that indicated 90 percent of the troops there were satisfied with the level of care.

Thursday’s announcement is not the first time the Army has trimmed Warrior Transition Units. In 2009, when the number of troops in the units had fallen from more than 12,000 to 9,500, the Army cut three WTUs at Fort Leavenworth, Kan., Fort Rucker and Redstone Arsenal, Ala., and restructured six others.

Currently, the Army reported, 9 percent of troops in the units are there because of combat wounds. Another 40 percent have deployment-related illnesses or injuries, while 4 percent have PTSD as a primary diagnosis. The others are nursing a variety of injuries and illnesses not directly related to the war, but the Army pointed out that 84 percent of troops in the WTUs have deployed during their careers.

Overall, more than 58,000 troops have passed through WTUs since they were created, and more than 28,000 have returned to the force, the Army said.