Army, in talks to keep Mannheim base, eyes other posts 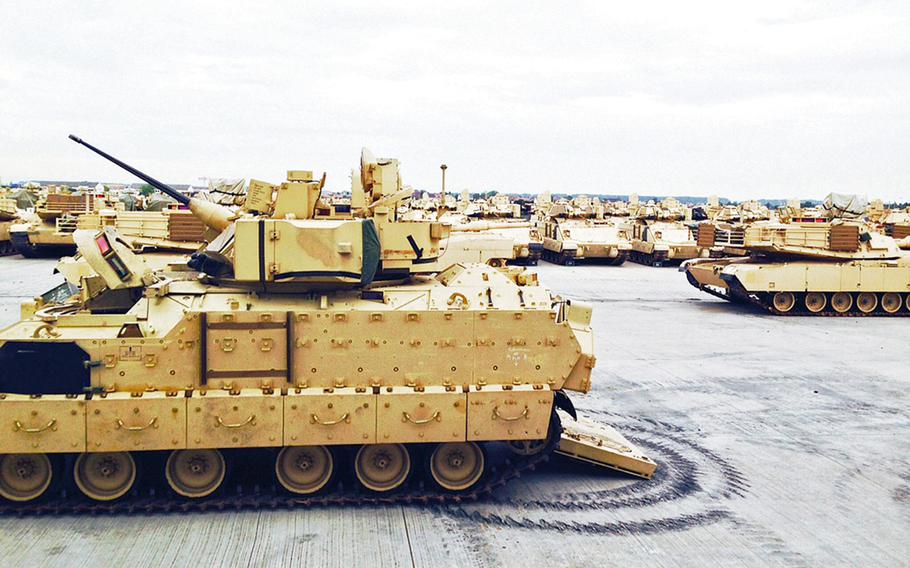 STUTTGART, Germany — The Army wants to retain a strategic base in Mannheim that was slated for closure, in order to support a growing mission in Europe, where the service also is investigating potential new operational sites should the Pentagon decide to deploy more soldiers overseas in the future.

U.S. Army Europe left Mannheim’s Coleman Barracks in 2011 only to return there in 2015 on what was to be a temporary basis. At the time, the military was grasping for a quick solution to accommodate an influx of tanks and other combat vehicles that were headed back Europe amid concerns about a more aggressive Russia.

Now, the Army says it needs to “retain” the base and negotiations are underway with German authorities over the possible terms.

“We are assessing the long range requirements for Coleman Barracks and expect a decision in the near future. Once that decision is made we can provide better details on future plans,” Maj. Mark Miller, a USAREUR spokesman, said.

Like other installations given up by the U.S. in recent years, local German authorities have eyed Coleman Barracks as a possible site for migrants who have moved into the region.

The Army’s desire to keep Coleman Barracks comes as USAREUR continues to add more firepower in Europe with tank, heavy vehicles and weaponry placed at storage sites like the one in Mannheim.

Under the Pentagon’s proposed 2018 budget, USAREUR is slated to receive $3.2 billion under the European Reassurance Initiative, with a large chunk of that funding dedicated to rotating more soldiers to Europe and adding more prepositioned weaponry at various staging locations.

After decades of drawing down and closing installations, the Army’s mission in Europe has intensified in the wake of Russia’s 2014 intervention in Ukraine, with larger exercises and a more steady presence in Poland and the Baltics. Facilities such as Coleman Barracks, serve as logistical cogs that help enable operations across the continent.

USAREUR also is examining a range of other sites that could host more troops and equipment should the Pentagon want to further enhance its presence.

“At the request of the Department of the Army, USAREUR is assessing potential courses of action regarding additional personnel and equipment in the European theater,” Miller said in a statement.

Already, the Army has surveyed potential base sites in the northern German towns of Bergen and Fallingbostel.

The military also has inquired with German authorities about the availability of an old weapons depot near the southwestern German town of Kriegsfeld that was given up by the U.S. in the 1990s, according to German news reports.

USAREUR declined to say what potential installations are being investigated or whether the sites are limited to just Germany, saying “it’s all just research at this point.”

The research is aimed at laying out the options for leaders.

“Some our research involves reaching out to host nation authorities regarding laws, constraints, and capacity of facilities. This does not mean specific courses of action will be executed but will guide our military and political leaders to make informed decisions about the future of the Army in Europe,” Miller said.

While USAREUR declined to offer specifics, it did say it was not examining the possibility of permanently stationing soldiers in Poland, where there is a large U.S. rotational presence. The permanent placement of forces there could be regarded as a violation of the NATO-Russia Founding Act, which puts limits on the establishment of large formations in former Warsaw pact states.

“(T)here is no research being done that would violate that,” Miller said.