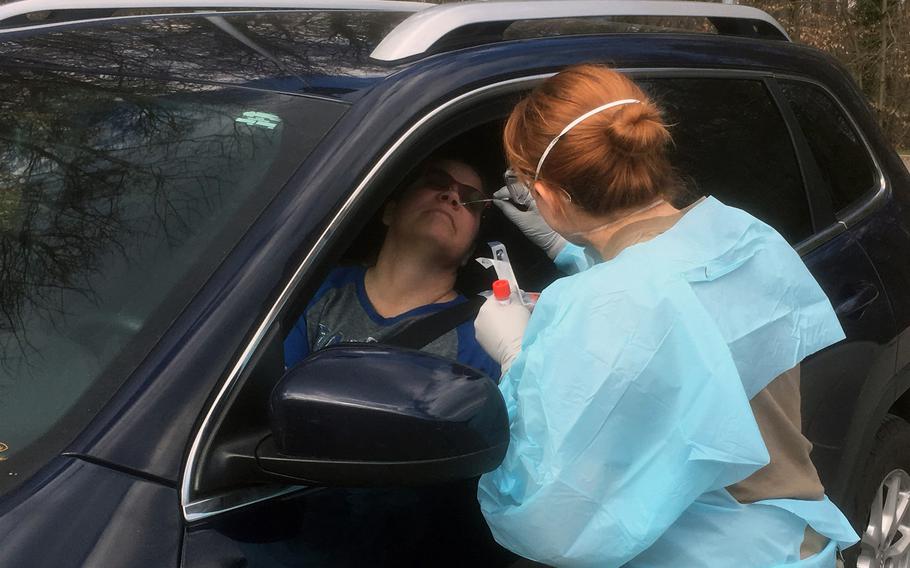 STUTTGART, Germany — Coronavirus testing at the Army garrison here briefly expanded to include symptom-free people who live in on-base apartment buildings or work in customer service, as the military tried a new strategy to stem the spread of the virus, officials said.

But the effort, launched over the weekend, was curtailed two days after it began because of limited supplies. Garrison officials hope to restart limited testing Tuesday.

The halt came because “there is the potential you can overwhelm the system,” garrison commander Col. Jason Condrey said in an interview Monday.

Thirty-three people in the Stuttgart military community have tested positive for the virus, which is more confirmed cases than any other military area overseas. The virus has been diagnosed in around 60 personnel at U.S. bases in Europe.

As results from the first batch of tests come in, the garrison expects to better understand the scope of the problem, Condrey said.

“From my perspective, (the virus) is pretty much everywhere,” he said.

A new testing center was set up at the Exchange on Panzer Kaserne over the weekend and 250 test samples were taken, Condrey said in a community announcement Sunday.

“In order to get ahead of the virus, we need to look in every workspace, in every stairwell apartment within our family housing, and look at our workforce in some of those critical, high-contact services,” he said.

As of Friday, LRMC had processed about 550 total coronavirus tests and was averaging roughly 40 test analyses per day, hospital officials said. The recent arrival of new processing equipment has allowed the hospital to increase that test rate more than tenfold to 435 daily.

More testing, along with stricter adherence to social distancing rules — keeping at least six feet away from anyone other than family members or partners — are key to stopping the virus’ rapid spread, Condrey said.

“It’s clear to me we’ve been fighting the enemy’s plan for several weeks now, the enemy being this virus,” he said. “We’ve not been fast enough.”

Since the coronavirus outbreak reached Europe in late January, testing within the U.S. military community on the Continent has largely been restricted to those with symptoms, people who had recently traveled to an area where the virus was known to be circulating — such as Wuhan in China, where it began — or who had been in contact with an infected person.

Stuttgart, a major city with an international airport, is unusual among garrisons in Europe, which are typically in smaller towns. Another factor that could explain the high number of cases is that personnel in Stuttgart, home to U.S. European and Africa Command, tend to travel more frequently than at posts that host tactical units, Condrey said.

The main aim of expanding testing to those without symptoms is to reduce the spread of the virus by people who are infected but show no sign of illness.

Military health officials are discussing whether to add labs in Europe to analyze coronavirus tests, which could speed up the time it takes to determine if someone has the virus. It’s not known how soon more test sites could be added, LRMC’s Col. Randall Freeman told Stars and Stripes last week. LRMC is currently the only U.S. military facility in Europe equipped to analyze coronavirus tests.

Testing asymptomatic people doesn’t mean everyone on post can get screened, Condrey said.

“We’ve had a change in how we do testing that makes this possible, but even with that change, we don’t have enough test kits to test everyone,” he said.

Instead, the Stuttgart garrison health team is targeting certain areas on base to get as comprehensive a sampling as possible, Condrey said, adding that the best way to keep the virus from spreading was to practice social distancing.

Condrey said the ability to expand testing was the result of guidance from U.S. Army Europe boss Lt. Gen. Christopher Cavoli, which has given local commanders more flexibility.

A drive-thru screening site next to the health clinic at Stuttgart’s Patch Barracks will continue to test people with symptoms that could indicate coronavirus. Other military facilities across Europe have set up similar sites.