Army in Europe plans to shed hundreds of local nationals 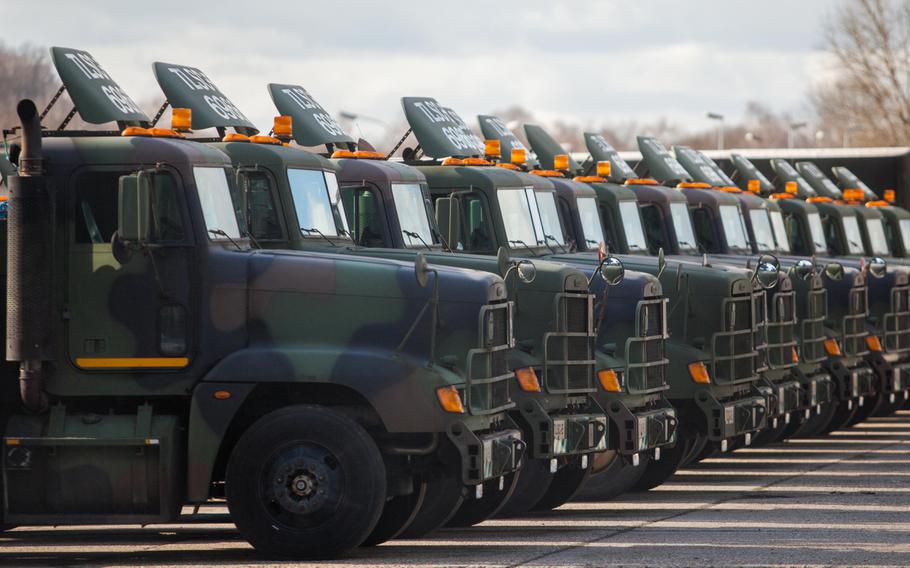 Trucks of the 21st Theater Sustainment Command's 6966th Truck Transportation Terminal are parked in a row Thursday, Feb. 20, 2014, at Kleber Kaserne in Kaiserslautern, Germany. The 6966th is one of four 21st TSC units facing personnel reductions as part of a round of force structure changes announced Thursday by U.S. Army Europe. Matt Millham/Stars and Stripes (Matt Millham/Stars and Stripes)

The changes also will result in a net increase of 44 U.S. civilian positions, while 89 military positions will be shed.

Army officials described the actions as a “rebalancing” of forces, adjusting the size of units that support the Army’s combat forces stationed in Europe.

Those forces have been heavily slashed in recent years, as two heavy brigade combat teams and a corps headquarters were shuttered and various smaller units were repatriated or inactivated. All told, those actions amounted to the loss of more than 11,000 soldiers across the Continent — roughly a quarter of the Army’s total strength in Europe.

Workers were notified of the force reductions Thursday, but many local national employees won’t have to leave their jobs for more than a year, as the process of identifying individual workers for cuts and the requirements of various host-nation agreements play out, USAREUR officials said.

A number of the positions targeted are already empty, easing somewhat the number of layoffs the restructuring will cause.

The realignment affects three major units: the 21st Theater Sustainment Command, the Joint Multinational Training Command and Installation Management Command-Europe. Most of the reorganization will hit locations in Germany, though sites in Belgium and the Netherlands also will be affected.

The cuts to the organization “are completely necessary,” Helmut Haufe, general manager of the TLSC-E, said. “Less troops, less units to be supported means less supporters required. And that’s a logic nobody can deny.”

Three of the TLSC-E’s primary functions — supply, maintenance and transportation — will take major hits. On its own, the Maintenance Activity Kaiserslautern, which repairs everything from tracked vehicles and trucks to weapons and radios, will lose 330 positions, leaving 177.

“USAREUR lost the fair share of its force structure” when it inactivated two heavy brigade combat teams and the maintenance-intensive equipment that came with them, Haufe said, “and we have to adjust our capacity.”

The Joint Multinational Training Command based, in Grafenwöhr, will eliminate 83 military positions, nine U.S. civilian slots and 114 local national positions under the restructuring.

While the job losses will be spread somewhat across the command’s footprint, which extends to every Army community in Europe, they will be most heavily concentrated in Grafenwöhr and Hohenfels, which have served as the main training ranges for U.S. forces deploying to Afghanistan from Europe.

“When you start looking at what requirements we’re going to need to support our U.S. forces here, there is a reduction in force, lots of a capacity reduction that isn’t going to be made up,” Col. Adam Loveless, chief of staff for JMTC, said.

Much of the paring of the JMTC’s military staff will come from the noncommissioned officer academy, which trains junior enlisted leaders. With fewer soldiers left in Europe to train, the academy’s training staff will be reduced by one training company, Loveless said.

Meanwhile, Installation Management Command-Europe will see its workforce increase modestly, though some communities will see major job cuts while others see gains.

“The reductions are largely behind us,” Dan Thompson, a spokesman for IMCOM-E, said.

The command’s pending actions, he said, are largely about rebalancing and adjusting support to various communities.

Some of those gains include “the formal inclusion” of Army Community Service and Soldier and Family Assistance Center support positions previously considered “overhire,” Thompson wrote in an email.

The community losing the most jobs in IMCOM-E’s rebalancing is Baumholder, which was home to the 170th Infantry Brigade Combat Team, one of the two brigades that were inactivated in the last two years. It will be converted from a garrison to a “small site” and lose eight military, 11 civilian and 154 local national positions.

“Effectively, we speak about 80 jobs, not 154” jobs being eliminated from the community, Lang said.

U.S. Army Garrison Rheinland-Pfalz, which has grown in population as units consolidated here from Mannheim, Heidelberg and elsewhere, will gain the most from IMCOM-E’s moves, with the addition of three military, 21 U.S. civilian and 179 local national employee positions.

Altogether, IMCOM-E will see a net gain of 66 U.S. and 15 local national positions and a reduction of 10 military positions.

Bruce Anderson, a spokesman for U.S. Army Europe, said in an email that the primary driver behind the force realignment is meeting the needs of a changed mission but said the moves would also result in cost savings.

It will likely be about four months before it is known which individual local national workers will be terminated. According to the USAREUR release announcing the restructuring, the 21st TSC will reduce its civilian positions no later than April 2015, while JMTC and IMCOM-E have until Sept. 30 of this year to make their civilian cuts.

Department of the Army civilians affected by the announcement won’t necessarily end up on the unemployment rolls. Depending on individual situations, some may look for government jobs stateside, some may retire, some may slide into new or existing vacancies and some may enter a priority-placement program that can reassign displaced personnel.

Local national workers in affected organizations will have to compete for the remaining positions. Those identified for termination won’t necessarily find themselves unemployed either. Depending on individual circumstances, some may be eligible for job retraining, retirement or transfer to vacant positions in other units.

The number of positions opening up, however, is far smaller than the number being eliminated, Haufe said, “so I’m afraid there isn’t much placement opportunity.”