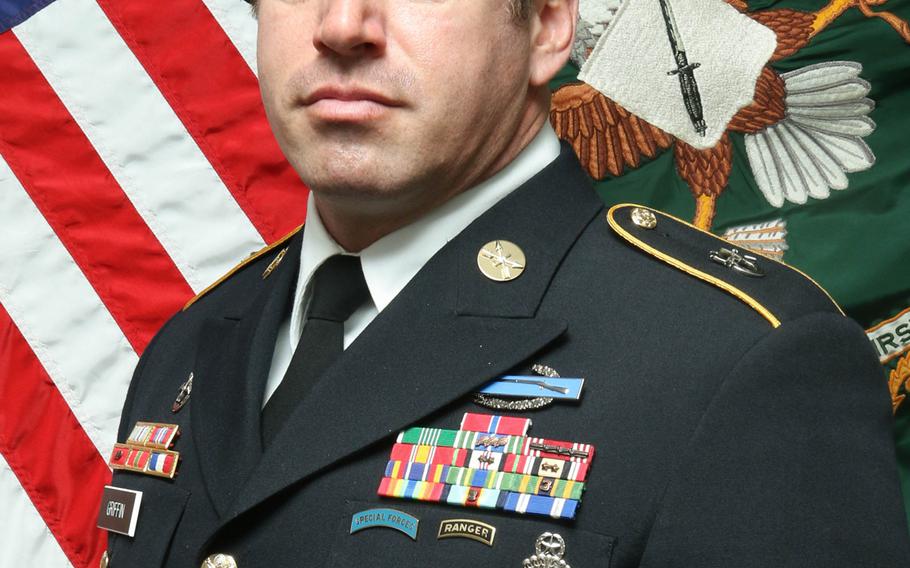 KABUL, Afghanistan — The Pentagon identified the Green Beret killed in Afghanistan this week as Sgt. 1st Class Jeremy W. Griffin, who was on his fourth combat deployment.

“The loss of Sgt. 1st Class Griffin is felt across the 1st Special Forces Group (Airborne) Family and the entire Special Forces community,” said Col. Owen G. Ray, 1st SFG (A) commander. “He was a warrior — an accomplished, respected and loved Special Forces Soldier that will never be forgotten.”

A graduate of the 61-day Ranger School at Fort Benning, Ga., and the 64-week Korean language course at the Defense Language Institute in Monterey, Calif., he had completed both the military’s most challenging physical course and one of its most academically demanding schools.

During his more than 15-year career, he had also completed basic and advanced Airborne Schools, among several others.

His death is the first combat fatality in Afghanistan since President Donald Trump abruptly ended nearly a year of peace negotiations with the Taliban earlier this month.

The insurgent group is active in Wardak and had announced earlier this month that more Americans would be killed if Trump ended peace talks, but it’s still unclear who was responsible for Griffin’s death. The incident is under investigation, the Pentagon said.

Trump and officials in his administration have promised to increase operations against the insurgents since the talks were scuttled more than a week ago, following a suicide car bombing attack in Kabul that killed Army Sgt. 1st Class Elis A. Barreto Ortiz, 34, and 11 others.

Trump in recent days has boasted that U.S. forces have stepped up operations against the militant group.

“The Taliban has never been hit harder than it is being hit right now,” he tweeted over the weekend.

However, U.S.-backed security forces in the country are preparing for an uptick in insurgent violence in the run-up to Afghanistan’s presidential election later this month, officials have said.

Griffin’s death brings to 17 the number of U.S. combat fatalities in Afghanistan in 2019, already the deadliest year for American troops in the country since international combat operations ended in late 2014.

Since then, the bulk of the roughly 20,000 international forces in the country have been focused on training and advising Afghan security forces.

Some 5,000 of around 14,000 American servicemembers deployed to the country are part of a separate counterterrorism mission known as Operation Freedom’s Sentinel. Griffin was serving in that smaller contingent, the Pentagon said.

Special operations troops like Griffin have been among the few U.S. servicemembers accompanying Afghan forces on the battlefield. About half of the U.S. military deaths in the country this year have been members of Special Forces.

Before his most recent tour in Afghanistan, Griffin deployed with the 82nd Airborne Division to Iraq in 2006 and Afghanistan in 2009. After completing the Special Forces Qualification Course in September 2014, he deployed to Afghanistan with 1st SFG (A) in 2016 and served on an overseas rotation in Korea in 2018.

He had also served with 7th Special Forces Group (Airborne) before attending training to become a Green Beret himself, USASOC spokesman Lt. Col. Loren Bymer said in a statement.

He was posthumously awarded a Bronze Star and Purple Heart, Bymer said.