Army hustles to train soldiers for both conventional war, counterinsurgency 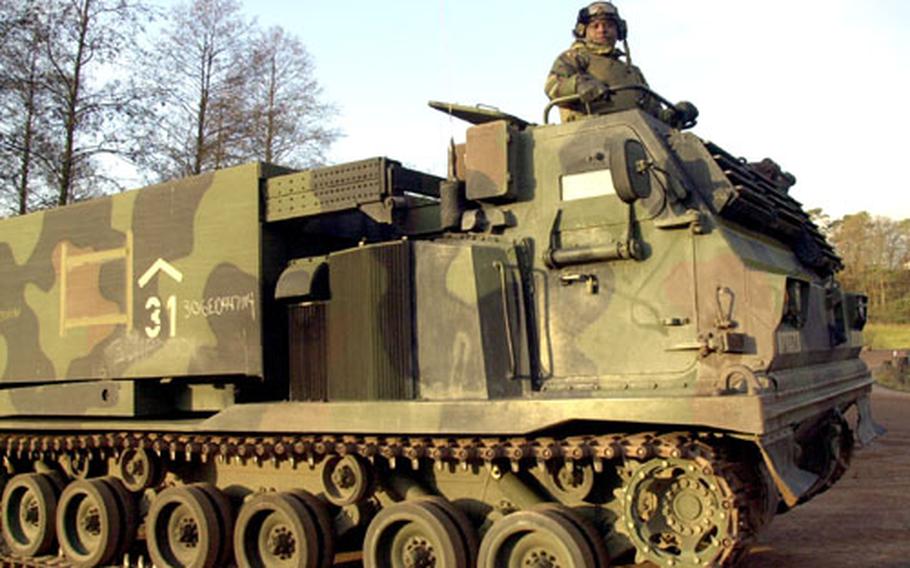 Staff Sgt. Lennie K. Mattis, a launcher chief, waits early in the morning in his M270 launcher for his crew’s chance to fire rockets during training last month in Baumholder, Germany. The 1st Armored Division is training for the possibility that a war on a conventional battlefield could follow the anti-insurgency war in Iraq. (Terry Boyd / S&S)

Staff Sgt. Lennie K. Mattis, a launcher chief, waits early in the morning in his M270 launcher for his crew’s chance to fire rockets during training last month in Baumholder, Germany. The 1st Armored Division is training for the possibility that a war on a conventional battlefield could follow the anti-insurgency war in Iraq. (Terry Boyd / S&S) 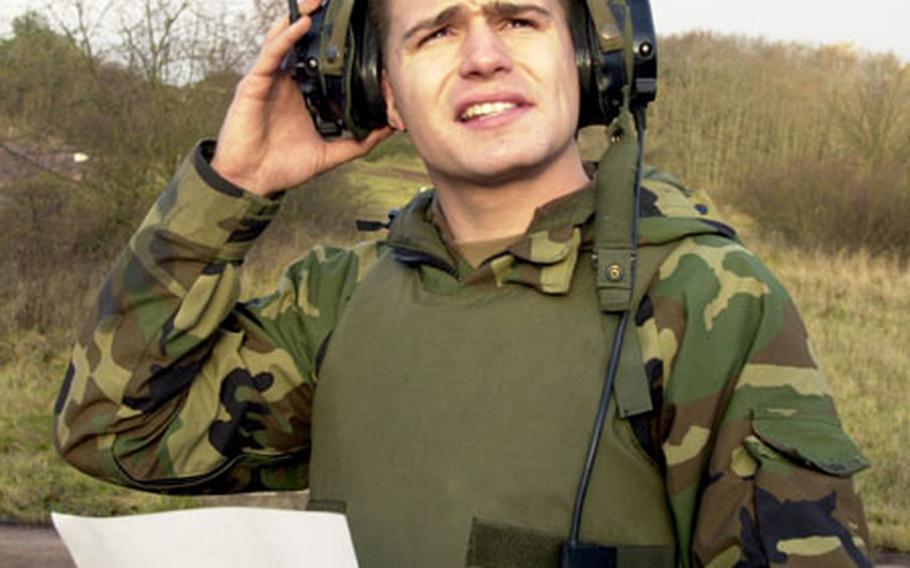 Sgt. Anthony Alvarado, a launcher chief with Company A, 1st Battalion, 94th Field Artillery, adjusts his headset to talk to crew members as he double-checks firing instructions "so the rocket lands where it&#39;s supposed to." Another crew chief called a multiple launch rocket system live fire "controlled chaos" because so much activity is going on. (Terry Boyd / S&S) 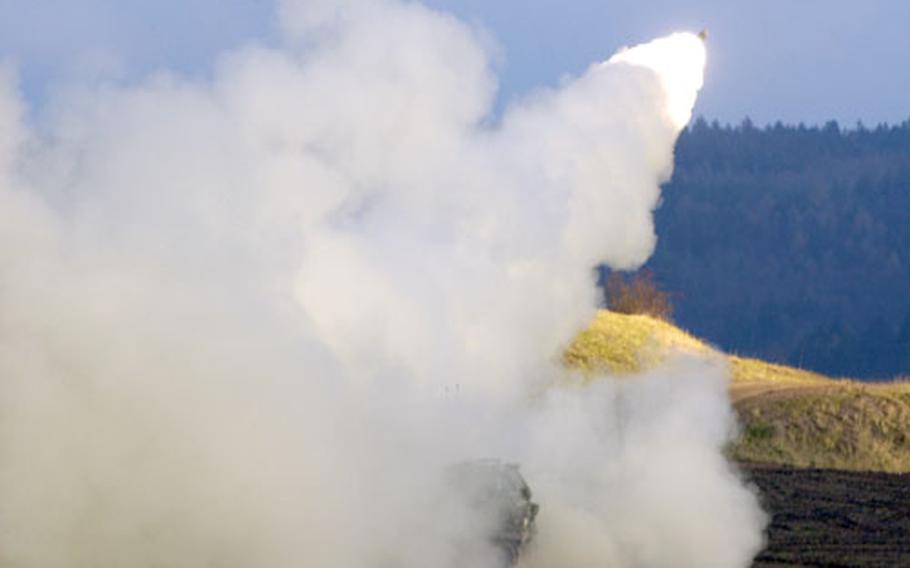 BAUMHOLDER, Germany &#8212; In a radical reorientation, many soldiers are training to fight two distinctly different wars as the U.S. Army adapts from the post-Cold War world to fighting the global war on terrorism.

Even soldiers in the Army&#8217;s last armored division are expected to train to be ready to wage two completely different fights &#8212; a nebulous counterinsurgency such as Iraq, and a large force-on-force conflict on a defined battlefield.

While a majority of soldiers in the 1st Armored Division are infantrymen, the Army is becoming more high-tech, not less, and heavy divisions are bringing a larger number of complex, high-skill weapons systems to the battlefield.

The Army&#8217;s plan to keep those soldiers proficient on those weapons is being tested to the limits.

During recent Multiple Launch Rocket System live-fire training at Baumholder&#8217;s range near Idar-Oberstein, crews from the 1st AD&#8217;s 1st Battalion, 94th Field Artillery Regiment were slow to start working together to fire the rockets, among the most lethal weapons in the U.S. arsenal.

Batteries were scheduled to begin three firing scenarios at 8 a.m., but didn&#8217;t finish until late in the afternoon because of complications, including peacetime safety regulations, only a few miles from the main town of Baumholder.

Before the firings, mechanics wrestled with recalcitrant vehicles that had been shipped back from Iraq &#8220;with a lot of problems,&#8221; said Staff Sgt. Julio Metzler, a Battery C section chief.

&#8220;Knockin&#8217; the rust off,&#8221; is how Pfc. Aaron Irions, a driver for headquarters battery, put it, a phrase echoed by Metzler and other soldiers describing the crew qualifications &#8212; step 8 in an 18-step series of competency tests termed rocket tables.

But the question becomes, what if the 1st AD must fight a conventional war soon after returning from Iraq?

With U.S. forces fighting asymmetrical wars in Afghanistan and Iraq, can they be expected to fight a conventional war against North Korea or Iran?

Army officials are trying their best to make sure soldiers are proficient at both conventional and anti-insurgency warfare, said Jonathan Grossman, a senior researcher specializing in military technology and military training at the Santa Monica, Calif.-base RAND Corp., a nonprofit think tank that often helps shape public policy.

But with two &#8220;main&#8221; missions, how much time can soldiers dedicate to retaining critical, highly perishable skills with high-tech weapons systems?

Typically, heavy divisions are given about 10 months to get back up to speed following a deployment. But can soldiers cope with two &#8220;main&#8221; missions at the same time?

&#8220;Sure you can, but you can&#8217;t expect that same level of proficiency doing a skilled job ... immediately after coming back from the desert,&#8221; said retired Gen. Dennis Reimer, a former Army chief of staff who helped Gen. Eric Shinseki shape the modern Army.

That the Army is training soldiers for two diverse missions &#8220;indicates, one, how high a quality of soldiers we have, who can ... adapt to other more urgent requirements; and two, the flexibility of the Army,&#8221; Reimer said in a telephone interview from the National Memorial Institute for the Prevention of Terrorism in Oklahoma City, where he&#8217;s director.

But artillerymen can&#8217;t be expected to fight as light infantry in Iraq, &#8220;then go to Graf and put the first missile down range perfectly the first time,&#8221; he said, referring to the Combat Maneuver Training Center in Grafenw&#246;hr.

That said, no soldier or officer complained at Baumholder, headquarters for the 1st AD&#8217;s 2nd Brigade and Division Artillery. Firing an MLRS was &#8220;awesome,&#8221; Metzler said.

Though crews were nervous before the first test, they &#8220;high-fived each other in the launcher&#8221; upon completing the firings, said Staff Sgt. James Cookman, a Battery C section chief. Yes, having to train for two fights instead of one is not easy, but it&#8217;s the new reality, he said.

Frisbie and other officers echoed soldiers, saying that returning to artillery training after fighting in Iraq is exhilarating, but daunting.

Coordinating the highly mobile launchers with battalion command-and-control after 15 months in Iraq, then nearly four months of reintegration, proved difficult.

Even firing practice rockets, which have a limited range, &#8220;is so precise that to go from being an 11 Bravo to firing rockets from point A to point B at a target you can&#8217;t see is tough,&#8221; Frisbie said.

The battalion now will break off their normal rocket tables to go to Grafenw&#246;hr in March for infantry training to prepare for an eventual return deployment to Iraq.

In theory, both missions &#8212; artillery and infantry &#8212; sound simple, but in reality neither is, Grossman said. Learning light-infantry tactics such as maneuvering techniques, he said, &#8220;is really quite difficult.&#8221;

Firing the MRLS seems straightforward, but the ATACMS &#8212; Army tactical missile system with multiple warheads &#8212; &#8220;demands very detailed procedures to put in target information. They employ shoot-and-scoot tactics. At O-dark-30 on the battlefield, all hell can break loose unless teams are proficient,&#8221; Grossman said.

Studies show that soldiers who score in the top 25 percent on standardized Army entrance tests tend to learn at the fastest rate, Grossman said.

For smarter soldiers, training for two missions may not be a big problem, he said.

The ongoing two-mission reorientation is not unprecedented, say Pentagon officials and retired officers, who added that the Army always has trained for the most likely threat.

Reimer says he sees some similarity to Vietnam, where he went as an artillery officer, but ended up assisting infantry units.

All Army units change their mission statement to reflect the most probable tasks they will perform, wrote Lt. Col. Christopher Rodney in an e-mail response to a Stars and Stripes query.

Peacekeeping and peacemaking tasks are most probable for 1-94, &#8220;and so it is reflected in their training focus,&#8221; wrote Rodney, who works in the media relations division for the Department of the Army in Washington, D.C.

Peters, who is often critical of Defense Secretary Donald Rumsfeld, says he&#8217;s not worried &#8212; soldiers have sufficient time to recover skills after Iraq.

It&#8217;s easy to draw catastrophic conclusions from tactical details, Peters said. But he said he believes Iraq is having a positive effect on the Army, with the combat-experienced making it now the most experienced army in the world, as well as the best-trained and equipped.

The Multiple Launch Rocket System, built by Lockheed Martin, is one of the deadliest weapons on the conventional battlefield, though it has no real use in the anti-insurgency battle in Iraq.

MLRS crews can fire a variety of rockets, some of which give U.S. forces the ability to destroy the enemy&#8217;s command-and-control at ranges up to 25 miles.

That kind of firepower has the effect of turning an enemy armor offensive &#8220;into a bunch of tanks wandering around without a mission,&#8221; said Maj. John Frisbie, operations officer for the 1st Armored Division&#8217;s 1st Battalion, 94th Field Artillery, based at Strassburg Casern near Baumholder, Germany.

Each tracked M270 launcher and its crew of driver, gunner and section chief can fire up to 12 rockets in less than 60 seconds, according to Lockheed Martin documents.

Each MLRS launcher can deliver almost 8,000 munitions in less than 60 seconds at ranges exceeding 20 miles. Some canister-type rockets have the ability to disperse enough bomblets in 60 seconds to annihilate enemy troops over an entire 1,000- square-meter map grid.

A battalion&#8217;s five batteries &#8212; a total of 18 launchers &#8212; fire for the division commander via battalion and battery tactical operations centers. But each M270 crew can act independently, depending on the circumstances.