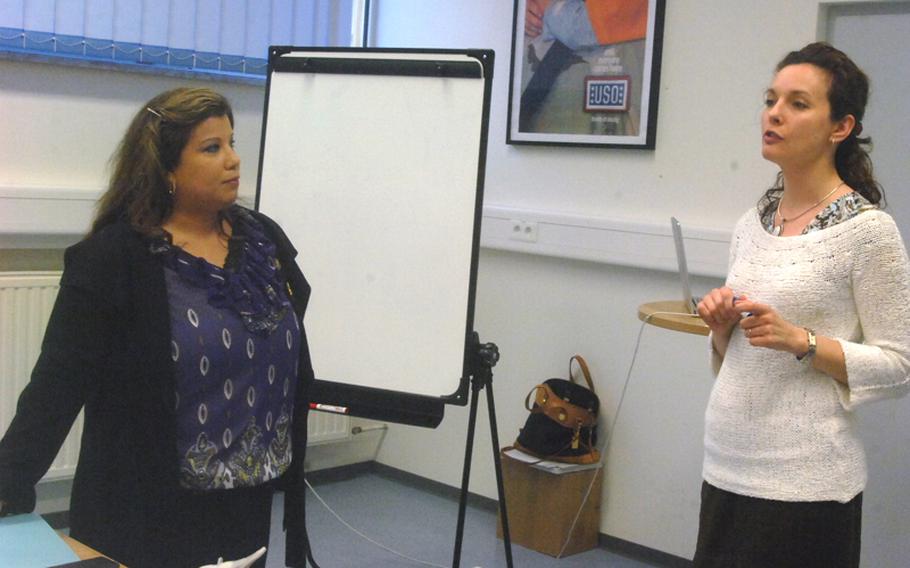 GRAFENW&Ouml;HR, Germany &mdash; Army wives in Germany are receiving the same training their husbands get to cope with traumatic combat experiences.

The 172nd Infantry Brigade, which is the test bed for the Army&rsquo;s new &ldquo;Comprehensive Soldier Fitness&rdquo; program, aims to train all of its soldiers and spouses in the so-called resilience techniques before the unit&rsquo;s next combat mission, according to brigade commander Col. Frank Zachar, who studied resilience at the University of Pennsylvania earlier this year.

&ldquo;The skills can not only be applied in the training and combat environments, but also at home with family members and friends,&rdquo; she said.

&ldquo;I realized we needed to teach these cognitive skills to all our soldiers (and) I realized we had to get spouses in on the program,&rdquo; he said.

People who are socially inclined are more resilient and able to bounce back from traumatic experiences, he said.

&ldquo;Family members and soldiers who are loners don&rsquo;t bounce back as quickly,&rdquo; Zachar said. &ldquo;It could be because they haven&rsquo;t developed these resilience skills and lack the self awareness skills to become social.&rdquo;

The fact that the brigade could soon be headed to Afghanistan has added impetus to the program. When the unit last deployed to Iraq, from 2008 to 2009, the enemy killed three of its soldiers. Two others were shot dead by another soldier while visiting a combat stress clinic in Baghdad and four others took their own lives during the deployment or after returning to Germany, according to brigade spokesman Maj. Joe Buccino.

Spouses of 172nd soldiers also faced stress during the deployment, a fact highlighted by the suicide of a spouse who was also a family readiness group leader.

Zachar said the resilience training is a way to deal with issues before they lead to suicide.

Several 172nd spouses, including Zachar&rsquo;s wife, Michelle, have completed a two-week, 80-hour course to qualify as master resilience trainers and they have begun to train other spouses at the Grafenw&ouml;hr United Service Organizations office.

Michelle Zachar, 44, said everyone has some level of resilience but that the Army training enhances a person&rsquo;s ability to bounce back from adversity and even become a better person after a bad experience.

&ldquo;The overarching theme (of the resilience training) is communication,&rdquo; she said. &ldquo;It is being able to communicate with people in an assertive way but it is also where you are able to have the best relationship with them by the way you are communicating.&rdquo;

The training teaches people to control their own thoughts, she said.

&ldquo;Most people think that an event happens and they react to it,&rdquo; she said. &ldquo;(What actually happen is that) you have a thought from an activating event and then you have consequences which are your emotions reacting to that thought.&rdquo;

Another 172nd spouse, Kelly Mullins, 33, of Glenolden, Pa., said she wishes she&rsquo;d had resilience training before her husband, Sgt. Roger Mullins, 36, of North Carolina, went to Iraq for a year with the brigade from 2008 to 2009.

&ldquo;We arrived here (at Grafenw&ouml;hr) in Oct. 2008,&rdquo; she said. &ldquo;My son was 2 months old, and 30 days later my husband deployed. I didn&rsquo;t know anyone here. All my support system was back home.&rdquo;

Resilience training would have made her more aware of why her emotional reactions were so intense at the time, she said.

Amanda Sims, 27, of Corpus Christi, Texas, who also did the resilience training, said she still argues with her husband, Sgt. Andrew Sims, 28, of Zanesville, Ohio, but she&rsquo;s able to communicate with him more effectively.

&ldquo;When plans have to change because we are in the Army I&rsquo;m able to just bounce back from that more easily and have a better attitude about it and support my husband better,&rdquo; she said.