Army honors WWII nurse for aiding U.S. troops during Battle of the Bulge 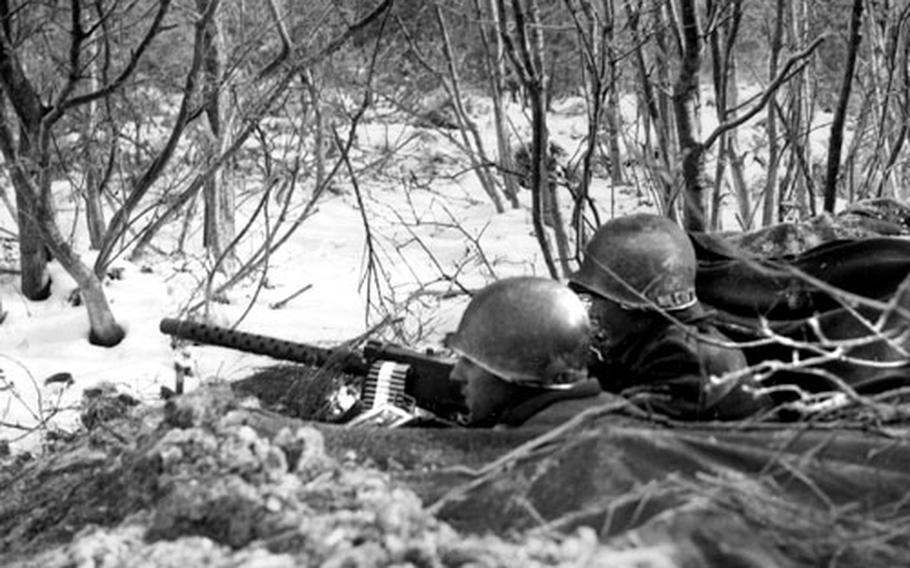 Photo caption has been corrected

GRAFENW&Ouml;HR, Germany &ndash; In the freezing winter of 1944, Augusta Chiwy traveled to Bastogne to spend Christmas with her father, and ended up tending U.S. soldiers wounded in the Battle of the Bulge. On Monday, the 101st Airborne Division formally recognized her contributions at a ceremony in Brussels, Belgium.

Col. Joseph &ldquo;J.P.&rdquo; McGee, commander of the 1st Brigade Combat Team, 101st, known as the &ldquo;Bastogne Brigade,&rdquo; and U.S. Ambassador to Belgium Howard Gutman were there for the presentation of the Department of the Army Civilian Award for Humanitarian Service. The recognition is the second this year for Chiwy, who was knighted by Belgium&rsquo;s King Albert II in June.

&ldquo;It&rsquo;s a shame that due to the times, the way things were, she got passed over, looked-by,&rdquo; said Martin King, a British writer who told Chiwy&rsquo;s story in a book he co-wrote with Michael Collins called &ldquo;Voices of the Bulge: Untold Stories from Veterans of the Battle of the Bulge.&rdquo; King has since advocated for recognition for Chiwy, who is now 90, he said.

The nurse&rsquo;s role has been noted before. In his book &ldquo;Band of Brothers,&rdquo; American historian Stephen Ambrose mentioned a black nurse from the Congo, whom he called Anna, at an aid station in Bastogne. Likewise, the HBO miniseries drawn from Ambrose&rsquo;s book referred to a black nurse in one scene as &ldquo;Anna, from the Congo.&rdquo;

Another Belgian nurse, Ren&eacute;e Lemaire, like Chiwy, volunteered for American medic Dr. John &ldquo;Jack&rdquo; Prior at a 10th Armored Division aid station in Bastogne, according to King&rsquo;s account. Lemaire and 30 wounded U.S. soldiers were later killed when a German bomb struck the station, causing a blast that threw Chiwy, in a house next door, through a wall, King said.

Ambrose dubbed Lemaire the &ldquo;Angel of Bastogne&rdquo; in his book, and a memorial to the nurse was erected in Bastogne on the 50th anniversary of her death.

King says his and Collins&rsquo; research revealed that Prior considered Chiwy more hands-on in the aid station&rsquo;s grimmest moments, when soldiers hemorrhaged or needed amputation.

&ldquo;She was the one doing the blood and guts, the battlefield trauma, whereas Ren&eacute;e shied away from it,&rdquo; King said.

Chiwy also once accompanied Prior to the front lines to retrieve wounded. According to King, when Prior remarked that Chiwy&rsquo;s small size must be the reason she wasn&rsquo;t wounded by oncoming fire, she replied, &ldquo; &lsquo;Oh, so they&rsquo;re not going to see a black face in white snow? They&rsquo;re just bad shots.&rsquo; &rdquo;

King describes Chiwy as a wry wit with the &ldquo;heart of an ox&rdquo; in a 5-foot, 2-inch frame. Born in Africa of a Belgian father and Congolese mother, she was sent to Belgium in her youth for an education. She attended nursing school and was working near Brussels in 1944 when she made her way to Bastogne.

In the chaotic days that followed, Prior and Chiwy developed a close relationship, King said. The doctor brought Chiwy to work with him at the 101st headquarters in Heintz Barracks after the aid station&rsquo;s destruction. When someone raised concerns over a black woman treating white soldiers, Prior fought for her, King said.

Chiwy hoped to continue with the division after it left Bastogne, but was told she wasn&rsquo;t needed.

King said he needed four years to get Chiwy&rsquo;s story from her and compare it to Prior&rsquo;s diaries, along with official reports from the war. Also at Monday&rsquo;s ceremony was a representative from Supreme Headquarters Allied Powers Europe, and retired Gen. David Petraeus, former 101st commander, wrote a letter for the ceremony, said Col. Greg Julian, public affairs officer for SHAPE. McGee later said that, even now, Chiwy looked like someone capable of braving the enemy.

King, who sat next to Chiwy during the ceremony, said when they first walked into Monday&rsquo;s event, she turned to him and said in French, &ldquo; &lsquo;They took their bloody time, didn&rsquo;t they?&rsquo; &rdquo;

CorrectionThe type of weapons being used by soldiers depicted in the U.S. Army file photo accompanying this story was misidentified. The soldiers are using .30-caliber light machine guns.