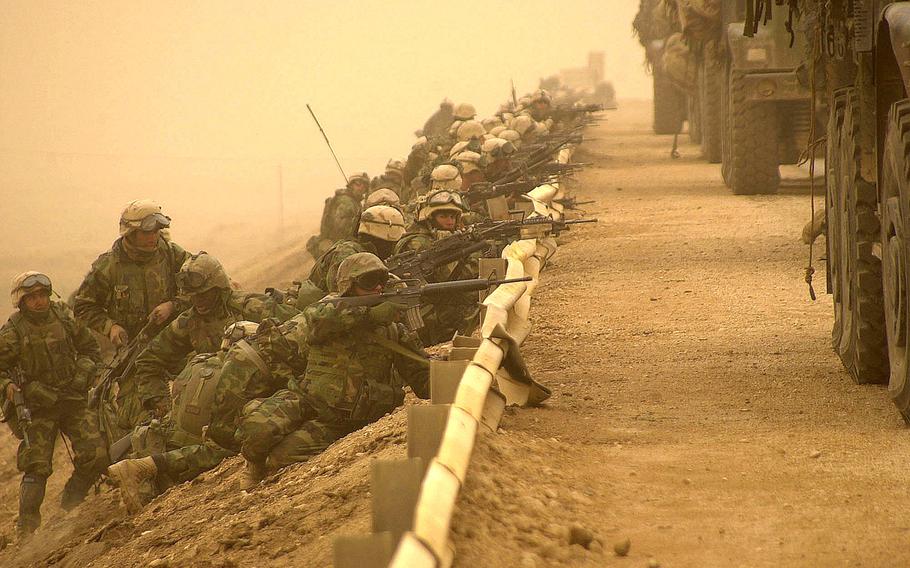 Buy Photo
U.S. troops line up behind a road barrier as they secure a key bridge along a main supply route during the march to Baghdad, Iraq, March 2003. (Mark Oliva/Stars and Stripes)

Buy Photo
U.S. troops line up behind a road barrier as they secure a key bridge along a main supply route during the march to Baghdad, Iraq, March 2003. (Mark Oliva/Stars and Stripes) 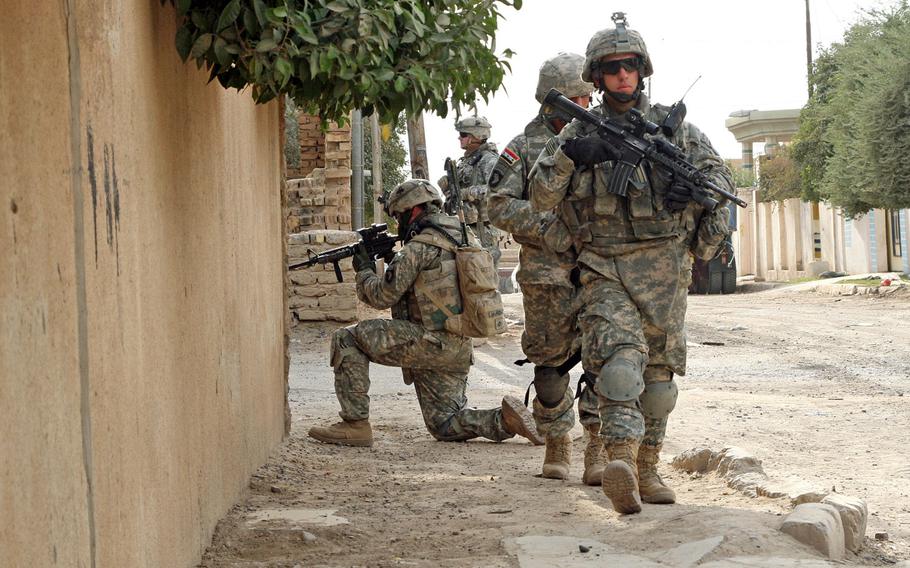 Buy Photo
First Lt. Erich Almonte, 27, of Miami, an Iraqi interpreter and other soldiers of 2nd Battalion, 327th Infantry Regiment, 101st Airborne Division move cautiously down a street during a patrol Friday in Samarra, Iraq in 2007. (Stars and Stripes) 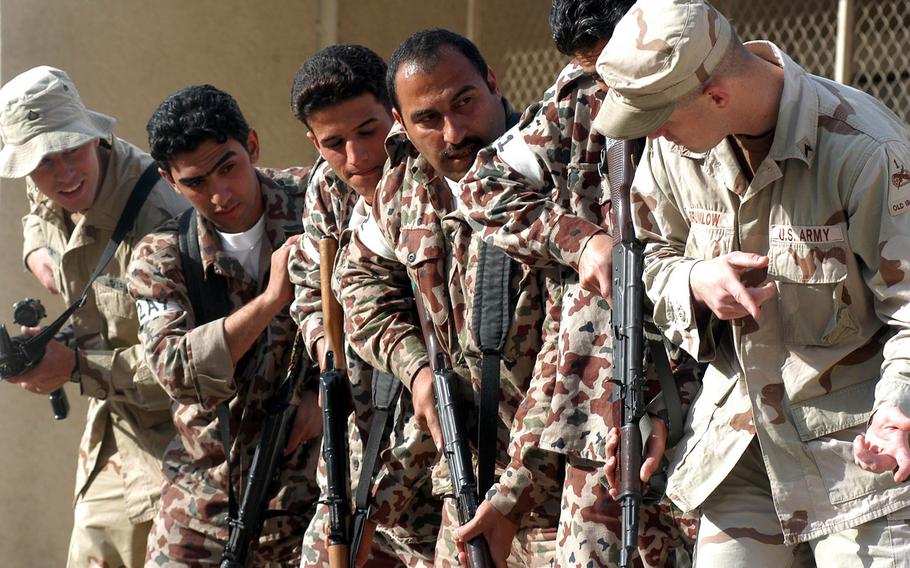 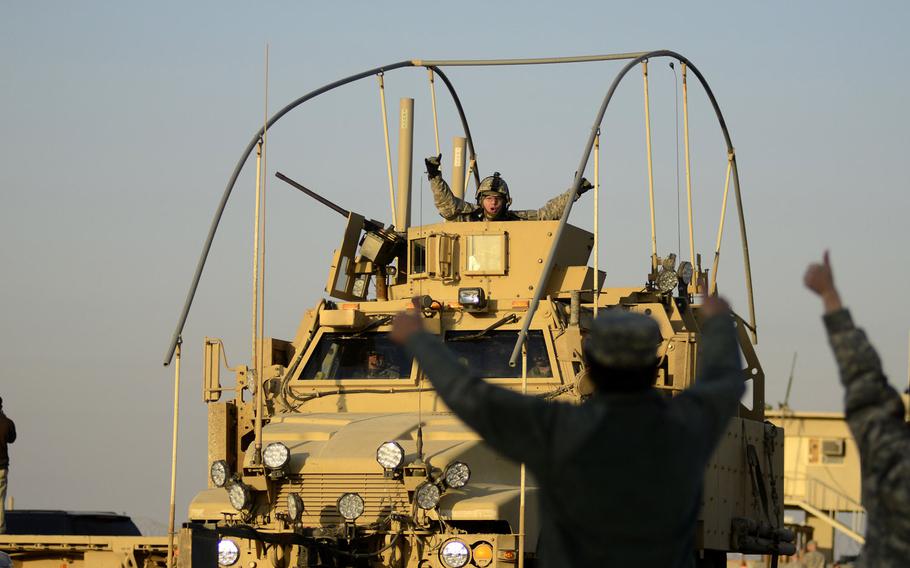 Buy Photo
U.S. soldiers cheer for each other as the last U.S. military convoy to exit Iraq files across the Kuwait border from Iraq at the Khabari crossing in 2011. (Stars and Stripes) 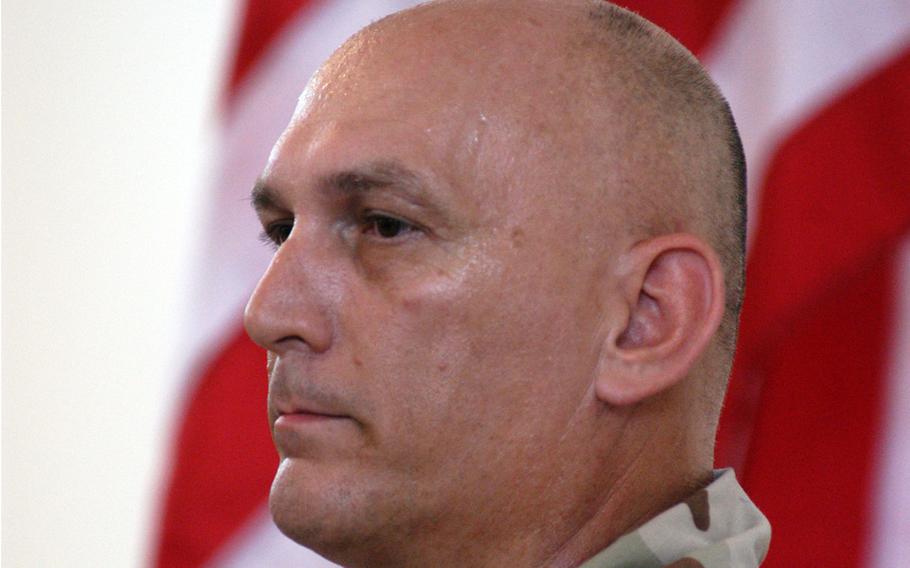 While fighting in Iraq, the Army failed to grasp the significance of the country’s sectarian divisions and “tended to penalize” its own innovative leaders, according the service’s long-awaited history of the war that claimed over 4,000 servicemembers’ lives.

The study, titled “The U.S. Army in the Iraq War” and published by the U.S. Army War College, was commissioned in 2013 by retired Gen. Raymond Odierno when he was the service’s chief.

The study highlights numerous failures during the 8-year conflict, including a lack of awareness among military leaders of the sectarian, social and political dynamics in the country that would fuel much of the violence. The critique, which is more than 1,000 pages long and contains hundreds of declassified documents, also says efforts to train Iraq’s military were insufficient and led to a force that was over-reliant on the U.S.

The decisions by commanders, often made in consensus, “seemed reasonable at the time they were made, but nonetheless added up over time to a failure to achieve our strategic objectives,” the study said. “Examining the reasoning behind these decisions and the systemic failures that produced them should be the first task in analyzing the Iraq War’s lessons.”

Authored by a group of Army officers, the study also criticizes the Army for failing to recognize effective leaders on the battlefield and an institutional tendency to punish the best innovators.

“Indeed, it seems that the most successful innovators were actually inverting policy rather than operating within policy, most notably in the case of the brigade and battalion-level COIN (counterinsurgency) approaches of 2005-2006,” the study said. “This is a fact the Army has not really confronted, and it seems possible that the Army in the Iraq War actually tended to penalize successful leaders who challenged their commanders.”

In the forward to the study, Odierno, who served multiple tours in Iraq including commander of multinational and U.S. forces, wrote that for operations to succeed, “we must have a thorough understanding of the operating environment and the local political and social consequences of our actions, especially when facing an enemy who understands the environment better than we do,”

The 2007 surge, which brought thousands of additional troops to quell violence and carry out a counter-insurgency mission focused on securing the population, gets the credit in the study for turning the security environment around.

However, President Barack Obama’s decision to withdraw all U.S. forces in 2011 after failing to reach agreement with the Iraqi government over a continued mission left the Iraqi army unprepared to deal with insurgencies to come.

“U.S. military plans did not anticipate the fall 2011 decision to withdraw all troops,” the study said. Those plans were based on “mistaken assumptions” that the State Department would negotiate ongoing training efforts.

“This mismatch of ends and means was more serious than U.S. government leaders understood in 2011-2012, partly because of the U.S. misinterpretation of low reported levels of violence and the difficulty of maintaining situational awareness as U.S. forces drew down,” the study said.

The study also faults the Iraqi government, led at the time by Prime Minister Nouri al-Maliki, for worsening sectarian divisions between rival Sunnis and Shiites, which brought a return of violence.

In the aftermath, Iraq eventually returned to a state of civil war and by 2014 the Islamic State group emerged as a major force as it seized huge pieces of territory, including the city of Mosul. “The war that had begun in 2003 was far from over,” the report said.

U.S. forces began trickling back to the country in 2014, and remain there today to help Iraq in the fight against ISIS.

Gen. Mark Milley, the current Army chief of staff, said the study was a first effort to grapple with the lessons of Iraq and that more studies were to come about the Army’s role in Operation Iraqi Freedom.

“OIF is a sober reminder that technological advantages and standoff weapons alone cannot render a decision; that the promise of short wars is often elusive,” wrote Milley. “Our Army must understand the type of war we are engaged with in order to adapt as necessary; that decisions in war occur on the ground in the mud and dirt; and that timeless factors such as human agency, chance, and an enemy’s conviction, all shape a war’s outcome.”

The publication comes amid news of the latest U.S. deaths in Syria, where the military has begun the process of withdrawing some 2,000 U.S. troops deployed there to battle ISIS. President Donald Trump ordered the withdrawal last month, insisting that ISIS had been beaten.

This week, after a blast that killed four Americans in Manbij, Syria, Sen. Lindsey Graham, R-S.C., raised concerns that Trump may be repeating the errors of the past, which he said have emboldened extremists and undermined U.S. partners in the region.

“I saw this in Iraq,” Graham said during a hearing to confirm Trump’s nominee for attorney general. “I’m now seeing this in Syria.”