Army helicopter pilots get on board with Navy-style landings 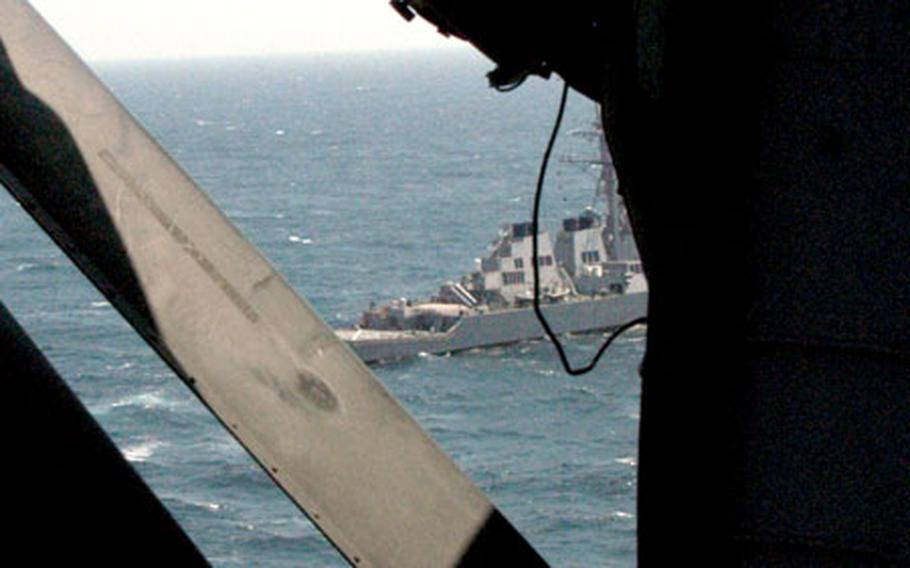 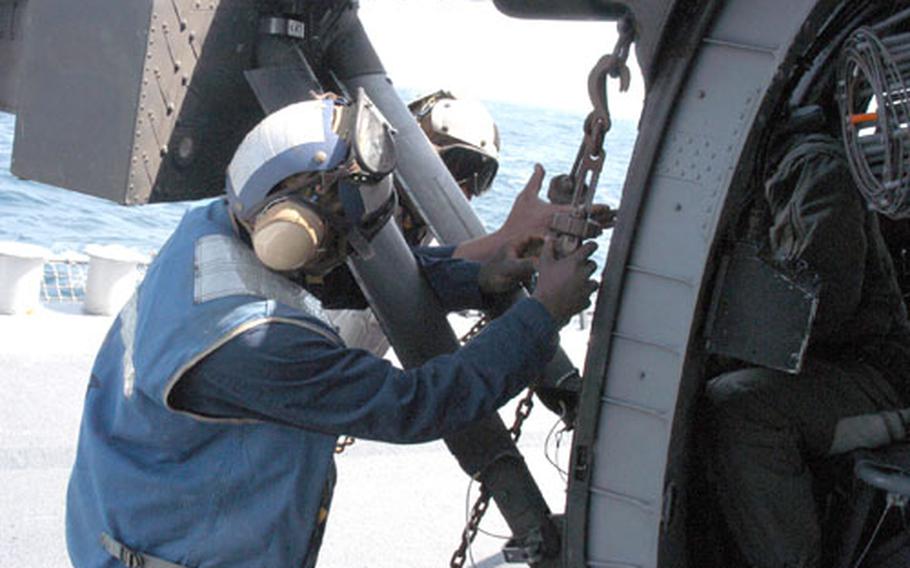 Sailors aboard the Wilbur attach chains to an Army Black Hawk during the deck landing training. (Juliana Gittler / S&S)

ABOARD THE USS CURTIS WILBUR &#8212; A tiny gray speck grows into the form of a ship before an Army Black Hawk helicopter maneuvers onto the very small deck of the destroyer USS Curtis Wilbur.

The small, moving platform, pitching in the wind and waves, is not the usual place for an Army aviator to land.

It&#8217;s hard enough landing a helicopter. Add movement, a sloping deck and the threat of a vast sea just a few feet away, and the procedure is all the more difficult.

That&#8217;s why the Army requires helicopter pilots and crew that operate near water, such as the 78th Aviation Battalion from Camp Zama, Japan, to land on ships.

Deck-landing qualifications give aviators more experience and provide a chance for Army and Navy personnel to work together, part of the Defense Department&#8217;s push for more joint cooperation.

On Thursday, several pilots were scheduled to land aboard the Curtis Wilbur for their qualifications. But after the first landing, the seas became too rough, causing them to cancel the training. But the cancellation demonstrated all the more why landing on a moving seesaw takes practice and skill.

Black Hawk pilots can use that skill to stop off for refueling during long overseas hauls or to medevac a patient.

Navy helicopter pilots do it all the time, but the Black Hawk, configured differently from the Navy&#8217;s Sea Hawk, can topple more easily on a rolling deck.

The training gives the pilot and crew specific experience, but it helps in other ways as well.

A ship at sea has few features around it that would help helicopter crews gauge distance and depth, so deck landings help crew chiefs learn to &#8220;see&#8221; landings differently. The crew chiefs sit in the back and serve as the pilots&#8217; eyes in the rear and side of the aircraft, so their visual acuity and depth perception is essential.

The experience can be applied to other reduced-visibility conditions, such as when operating with night-vision goggles or over desert sand, said crew chief Spc. Jeffrey York.

The training also helps teach the two services to work together.

An operations officer from Helicopter Antisubmarine Squadron (Light) 51 came to Zama from Naval Air Facility Atsugi to offer the Army pilots tips, such as to focus on the horizon, not the ship, to gauge how much the ship is moving.

The Navy also uses a crew on the deck to place chocks under the wheels and tie down the aircraft after a landing; in the Army, the crew chiefs jump out and do it themselves.

The deck landings allow crew chiefs to practice working with others and to use different procedures and hand and arm signals during landings.