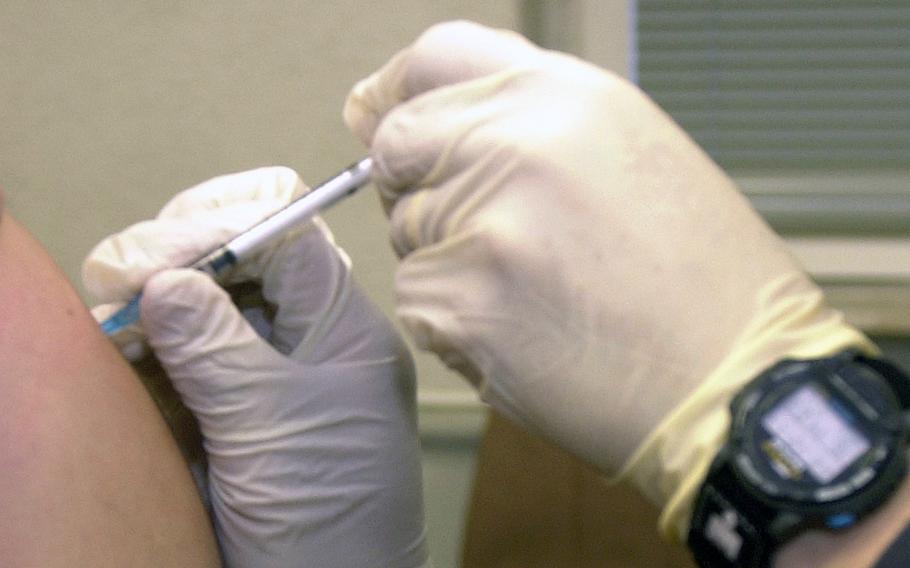 U.S. Army medical officials in Europe are urging military families to ensure their children are up to date on the measles vaccine due to the current outbreak of measles in Europe among unvaccinated children. (Michael Abrams/Stars and Stripes)

KAISERSLAUTERN, Germany — Amid an ongoing measles outbreak in Europe, U.S. Army health officials on the Continent are now recommending that Defense Department dependents get immunized against measles starting at six months old.

The Measles, Mumps and Rubella vaccine will now be included as part of the routine 6-month-old visit with a child’s pediatrician, Regional Health Command Europe said in a release. Parents will still be able to decide whether their child receives the vaccine then, RHCE spokesman Gino Mattorano said, but it’s being highly encouraged. The 6-month-old MMR shot would be in addition to the two doses children normally receive starting after their first birthday, officials said.

The new guidelines, issued last week, come about two weeks after the command put out an advisory about the outbreak. The latest message “is a little more specific,” Mattorano said on Thursday. The command is now saying “if you have kids in that age group, we really want you to get them immunized.”

In Europe, Romania and Italy have been hit the hardest by measles, but cases have been reported in at least 14 additional countries, including Germany, Belgium and France.

For those children, the MMR vaccination is still elective between 6 and 12 months, but mandatory starting at 12 months, officials said, in line with current Centers for Disease Control and Prevention guidelines.

So far this spring, there have been no confirmed cases of measles among DOD families in Europe, Mattorano said. But on May 4, there was a suspected case of measles in a 2-year-old family member enrolled at the SHAPE Child Development Center in Belgium, he said. The child has been isolated while officials await test results, Mattorano said.

On April 17, the CDC issued a travel alert for Belgium, Italy and Germany, recommending that children traveling to those countries be vaccinated against measles starting at 6 months old.

Aside from Italy and Romania, France, Germany, Poland, Switzerland and Ukraine are also seeing a significant number of measles cases, while Austria, Belgium, Bulgaria, the Czech Republic, Iceland, Hungary, Portugal, Spain and Sweden have experienced only a few.

The measles virus is highly contagious and can cause potentially serious illness, particularly in babies and the elderly, according to health officials.

The European Centre for Disease Prevention and Control says an estimated 90 percent of non-immune people exposed to an infected individual will contract the disease. The main symptoms are fever, rash, cough, runny nose and inflammation of the eye.