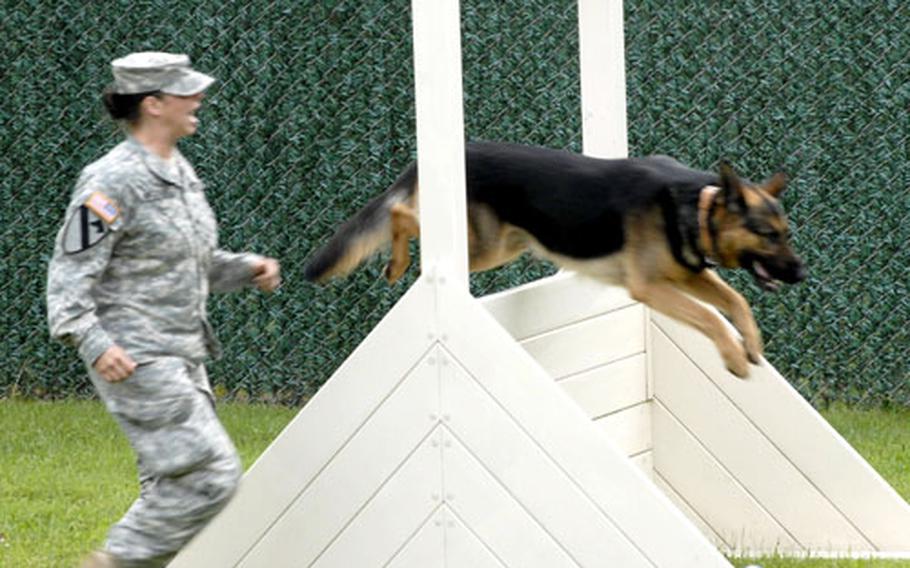 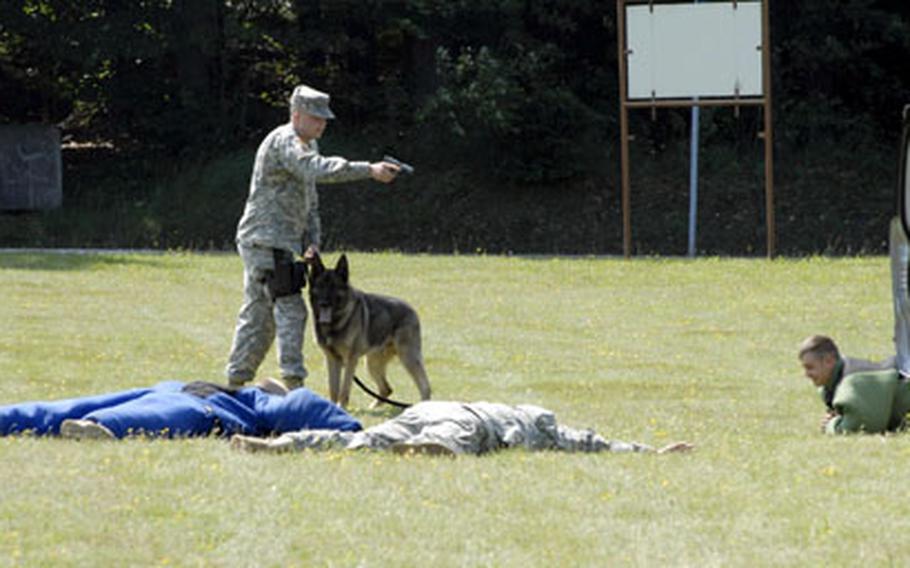 Military working dogs leapt over hurdles, scaled ramps and chomped down on fleeing suspects (who were wearing protective suits) Wednesday as part of a weeklong competition.

A total of 36 dog teams, each composed of a dog and its handler, are vying for top dog team and top kennel honors, which will be determined Friday.

The event is just the second working dog competition USAREUR has held since 2000. Last year&#8217;s contest took place in Hanau, but this year it moved to Miesau, which boasts the largest kennel in USAREUR. The participants mainly come from Army garrisons throughout Europe, but airmen from Spangdahlem Air Base and a German policeman also had their dogs in action.

The competition began Monday with a meet-and-greet event. On Tuesday, the contest&#8217;s 36 teams engaged in drug and explosive detection events. On Wednesday, the dogs &#8212; mostly Belgian Malinois and German shepherds, ranging in age from 2 to 11 &#8212; negotiated obstacles on an obedience course.

They also attacked fleeing suspects during a felony-apprehension scenario, in which dog handlers were told that the vehicle they pulled over was stolen and its occupants were considered armed and dangerous. The teams were told that backup was unvailable. "Does the handler have control at all times and can he pull off the felony traffic stop by himself?" said Sgt. 1st Class Anthony Bostwick, a competition judge. "That&#8217;s what we&#8217;re looking for."

Air Force Staff Sgt. Eric Brown of the 52nd Security Forces Squadron said he enjoyed the scenario, even if it was a little more than he expected. Brown&#8217;s dog, 10-year-old Laika, successfully tracked down a fleeing suspect but kept biting after the suspect began complying with Brown&#8217;s instructions. "She&#8217;s 10," Brown said of Laika. "She&#8217;s old. She&#8217;s cranky."

On Thursday, the dog teams will undergo a combat course. On Friday, handlers and their dogs will perform building searches and scouting. All the competition events mirror scenarios the troops could face either downrange or in garrison, said Sgt. 1st Class Dean Lane, USAREUR military working dog program manager. With the ability to sniff out weapon caches and roadside bombs, working dogs are a vital part of the force downrange, Lane said. Insurgents even recognize the abilities of the dogs. Reports from downrange indicate that bounties are being placed on military working dogs, Lane said.