Army halts use of WoundStat 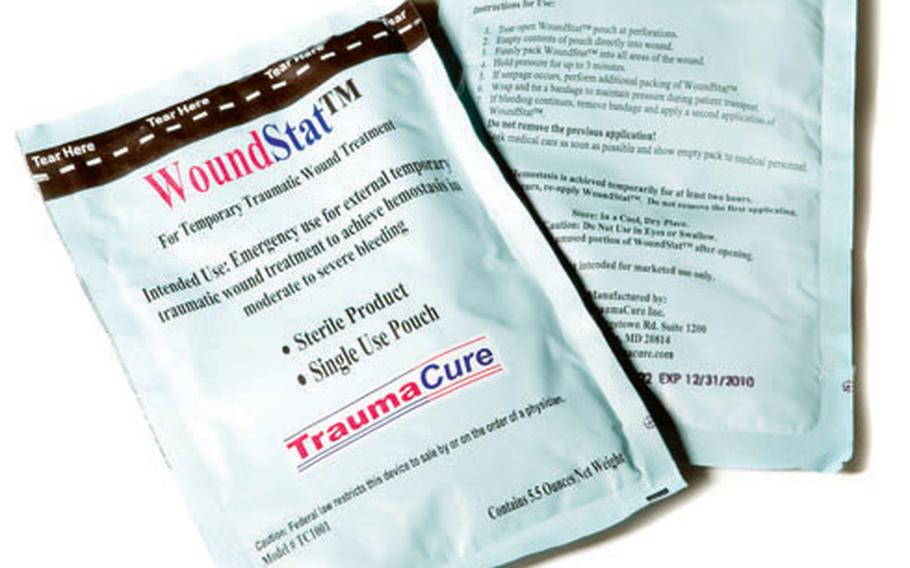 The U.S. Army has halted use of a powder designed to control bleeding only months after approving it because of concerns about its health effects.

WoundStat was dropped because a study by the U.S. Army Institute of Surgical Research showed it could injure the lining and walls of blood vessels, Army officials say.

WoundStat is a clay-based agent that is poured onto a moderate-to-severe wound and held in place until it sticks to the wound, according to the U.S. Food and Drug Administration, which approved the product.

The Army announced in October 2008 that it would start using it downrange, but drastically changed course on WoundStat in an All Army Activity Message dated April 17.

The granules in WoundStat could travel throughout a patient&#8217;s body, and it does not appear to be any more effective than combat gauze, the message indicated. WoundStat granules were found in the lungs of two lab animals during testing.

The message also orders Army units to turn over their WoundStat supplies to their supporting medical supply support activity. The Army is collecting information about the casualties who were treated with WoundStat and wants to examine them.

Almost 18,000 units of WoundStat were ordered, which is enough to equip every U.S. military medic in Afghanistan and Iraq, according to a news release from the manufacturer, Bethesda, Md.-based TraumaCure.

"The Army study wasn&#8217;t done by surgeons; it was done by physiologists," said Steve Berberich, a public relations consultant for TraumaCure. "We feel that the Army test is not conclusive and they are being cautious at this time."

"[Army officials] have sort of reversed themselves. They pulled them from the field. They haven&#8217;t sent them back" to the company, Berberich said about the WoundStat packs the Army received.

The preliminary data in the Air Force&#8217;s study suggested that WoundStat may be safely used on servicemembers and civilians, but recommended additional studies to determine its overall safety.

The Army&#8217;s move to yank WoundStat from service comes less than a year after the FDA approved its use.

"WoundStat was developed to address an unmet need in battlefield, ballistic and traumatic injuries. A similar need exists in rural areas where there is a delay in obtaining medical care," an FDA summary on the product stated.

According to the FDA document, "WoundStat for Rx use has been previously demonstrated to be as safe and effective as marketed wound management devices." The FDA went on to recommend that WoundStat be cleared for marketing in the United States.

Before WoundStat was pulled from Army service, a committee of medics from that branch, Navy corpsmen, surgeons and others recommended that it should be used if bandages do not work in treating casualties, the Associated Press reported.

"This product is designed to quickly stop the bleeding ... it has been shown to be effective. It has worked in a number of cases," Berberich said.

The Army ordered both Woundstat and a granular substance called Quik-Clot for all troops downrange last fall. Army medical officials say Quik-Clot works, but can cause severe burns, the Baltimore Sun has reported.