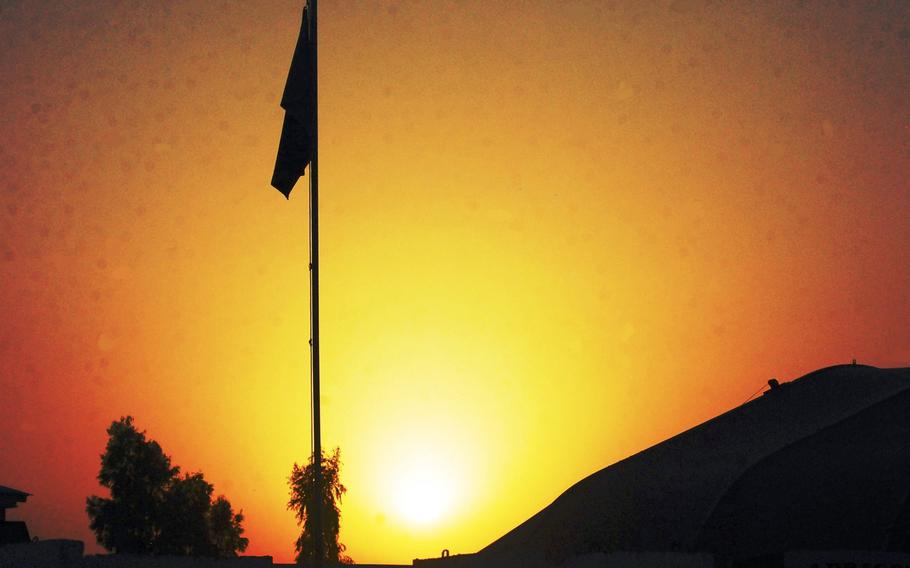 The sun sets over Forward Operating Base Fenty, Afghanistan, in this file photo. Military contractor Fluor Corp. was ordered to cease providing many services at the base near the city of Jalalabad, according to a memo issued June 22, 2020, as part of coronavirus prevention measures. (U.S. Army)

KABUL, Afghanistan — The U.S. military has ordered contractors in eastern Afghanistan to leave base as part of coronavirus prevention measures, forcing the closure of Morale, Welfare and Recreation facilities and other nonessential services.

Military contractor Fluor Corp. was to cease providing the services at Operating Base Fenty, near the city of Jalalabad in Nangarhar province, said a memo issued Monday and obtained by Stars and Stripes.

The document orders an immediate halt to shuttle bus services, a return of MWR computer and phone equipment, a permanent closure of all gyms and a reduction in staff or open hours for base housing, laundry and vehicle fuel services.

Once those and other instructions had been completed, Fluor was to remove all associated personnel from the base, said the memo, which stated the directions were in support of COVID-19 preventive measures.

The Irving, Texas-based company had received the memo, known as a letter of technical direction, from Army Contracting Command-Afghanistan that “provides direction from the Army regarding the services we provide,” company spokesman Brian Mershon said via email.

NATO’s Resolute Support declined repeated requests for comment. The contracting officer who signed the document declined to comment on the memo, other than to say that a newer version had been issued after the original leaked.

The military appears to have made the decision to end services and remove the contractors very quickly, said an attorney who reviewed the document.

“There’s no winding down period,” said Sam McCahon, an attorney with 30 years of experience in government contracting and a former adviser to both the government and contractors in contingency operations. “The immediacy of the directive indicates something unplanned.”

The directive to Fluor comes amid a wave of COVID-19 infections spreading across the country, where the latest World Health Organization data says at least 675 Afghans have died and more than 30,000 have been infected.

Afghan officials have warned that the true number of people affected by the virus is likely significantly higher.

The orders to withdraw personnel and shutter services at Fenty come after the U.S. has withdrawn thousands of troops and closed several bases in recent months, as part of a February peace deal with the Taliban meant to usher in further negotiations and lead to a full withdrawal of international forces.

Workers and equipment assigned to base closure activities were to remain at Fenty, the memo stated. While routine maintenance on roads and grounds was ordered to stop, the contractor was to continue responding to operational service orders and address issues affecting health or safety.

It’s unclear if the memo was issued in response to a local outbreak on the base. Military officials have not said how many U.S., NATO or other allied personnel, nor how many of the 27,641 contractors supporting them, have been infected.

But in April, an Air Force C-17 outfitted with a medical isolation system developed after a 2014 Ebola outbreak was used to evacuate three U.S. contractors from the country after they tested positive.

Earlier this month, U.S. Air Forces Central Command said the system had been used to transport more than 20 patients around the world, though it’s unclear how many of them had been based in Afghanistan.

Gen. Scott Miller, the top U.S. commander in the country, issued a public health emergency in March that closed some facilities, limited gatherings, and placed restrictions on service members and others under U.S. and NATO authority.

None of these preventive measures have been removed or relaxed since then, NATO’S Resolute Support said in a statement Monday.

“The COVID-19 threat is still very real, and our focus has not altered — Resolute Support’s top priority is the protection of our force,” the statement said.