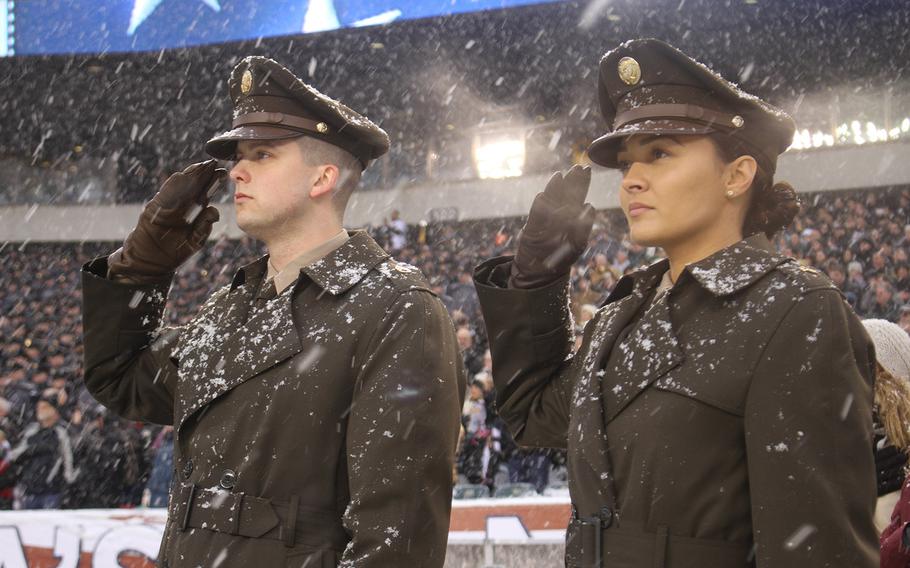 The new Army service uniforms, officially called the Army Greens, will see an initial run of about 200 prototypes that will be worn primarily by recruiters. (Ron Lee/U.S. Army)

WASHINGTON — The Army is finalizing its new green throwback uniforms inspired by soldiers’ World War II attire, but only recruiters should expect to don the new duds for the time being.

The service was making final tweaks to the design of the new uniform, to be officially called Army Greens, which will see an initial run of some 200 prototypes that will be fielded primarily by recruiters, Sgt. Maj. Daniel Dailey, the service's top enlisted soldier, said Monday. It could be another three months before that initial batch of uniforms is ready. But the vast majority of soldiers will not have an opportunity to purchase or receive the Greens until the summer of 2020.

Dailey received positive feedback from soldiers he spoke to about the new uniforms during a visit in recent days with troops in Asia, the Army’s top enlisted soldier told reporters at the Pentagon.

“This is something I think is very positive for the United States Army,” he said. “This is a great day to be a soldier, as I’ve gone around and talked to soldiers in the last few days overseas … an overwhelming majority are truly excited about this new uniform.”

Despite the ongoing tweaks – the Army has made changes in recent weeks to the jacket’s collar and the shirt’s material, for example – the service has made some important decisions about the uniform, Dailey said. Standard headgear to be worn with the Greens will be the Army’s Garrison Cap, which is an olive green, straight sided, foldable hat. Berets and the Service Cap will be optional to wear with the uniform.

Three new, optional jackets will be authorized to wear with the Army Greens – a green tanker jacket, essentially a zip-front, water-resistant windbreaker; a brown leather bomber jacket, and the popular green “Ike” jacket, modeled after the cropped jacket made famous by Gen. Dwight Eisenhower during World War II. All soldiers will be issued a green all-weather, trench coat-style jacket with the new uniforms.

Additionally, the Army is planning to allow soldiers assigned to airborne units to wear jump boots with the new Army Greens, Dailey said. The service has yet to make a decision, but it could switch to brown jump boots for the new uniform.

The new uniforms, which had been colloquially referred to as Pinks and Greens - a reference to a slightly different version of the World War II-era uniforms, have been a pet project of Dailey’s. The service has spent more than a year considering and developing them.

On Nov. 11, which was Veterans Day, the Army quietly announced its decision to adopt the new uniforms. However, the service has yet to conduct a high-profile, public rollout of the gear. Dailey said he expects official photographs detailing the uniform to be released in the near future.

Recruiters and some high-profile soldiers will begin receiving prototypes of the new uniform early in 2019, said Army Col. Steve Thomas, a project manager who led the Army’s development of the uniforms for Program Executive Officer Soldier. The uniforms will then start to be phased into the rest of the force in the summer of 2020 and will not be required until the summer of 2028.

That should give enlisted soldiers plenty of time to purchase the new gear with their uniform allowances, keeping them from having to pay out of pocket, he said.

Nonetheless, Dailey said the Army does not yet have an estimate for the cost of the new uniforms that he could announce publicly. The Army has pledged the Greens would not put additional costs on either enlisted soldiers nor on American taxpayers.

The Army is not ditching its blue service uniform. That uniform will become the service’s dress uniform that soldiers don for more formal occasions, whereas the Greens will be worn in day-to-day settings, Dailey said. Commanders will set soldiers’ duty uniforms, so troops who currently wear combat uniforms most days are likely to continue to do so, he said. The blues will be renamed, possibly to Army Dress Blues, Dailey added.

The sergeant major of the Army said he plans to wear his unofficial version of Army Greens at the Army-Navy football game Dec. 8 in Philadelphia.

“I’m excited about this,” Dailey said. “And soldiers are too.”