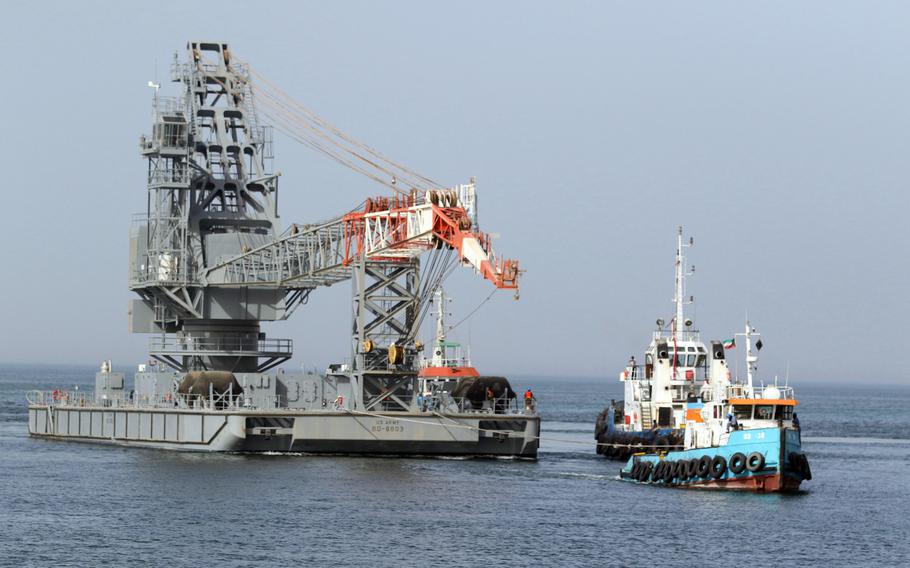 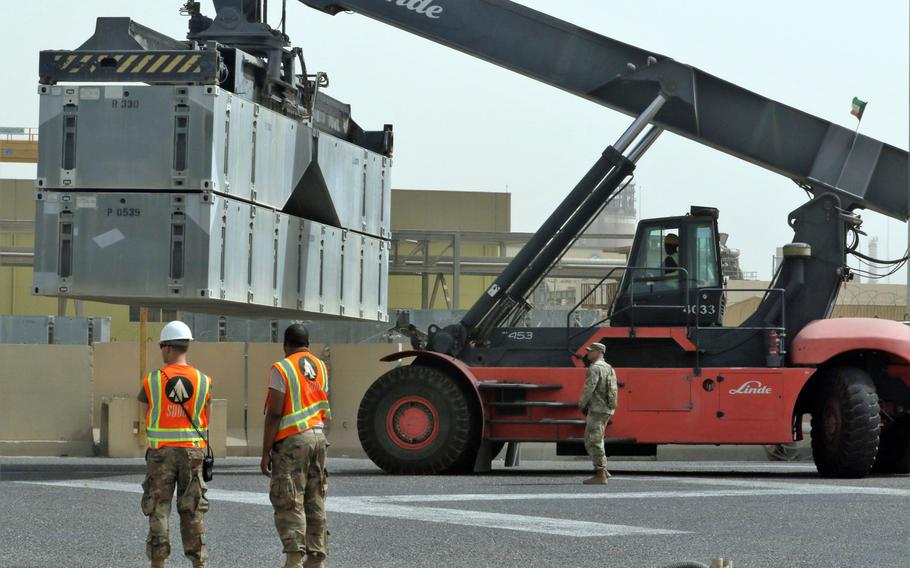 Soldiers from the 331st Transportation Company, based out of Joint Base Langley- Eustis, Va., direct where to place containers to be staged at a Shuaiba port in Kuwait on June 10, 2018, as part of the Nautical Horizon exercise. (Charlotte Reavis/U.S. Army) 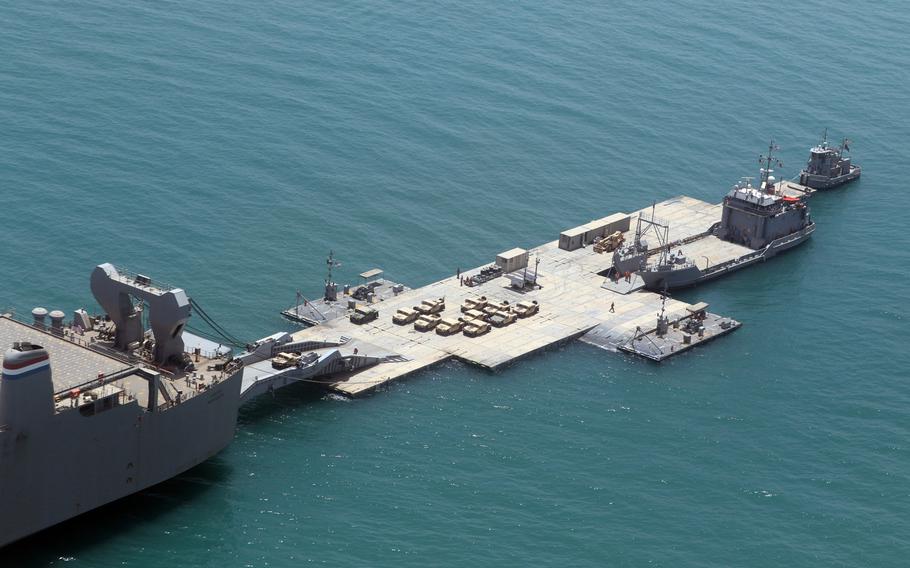 Equipment is transferred at sea in the Persian Gulf during Operation Nautical Horizon, June 24, 2018. (U.S. Army) 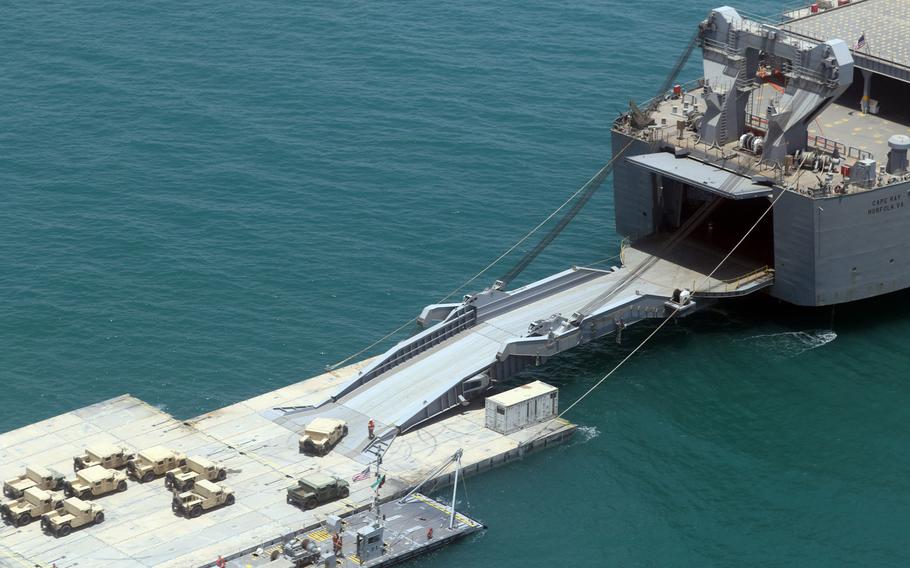 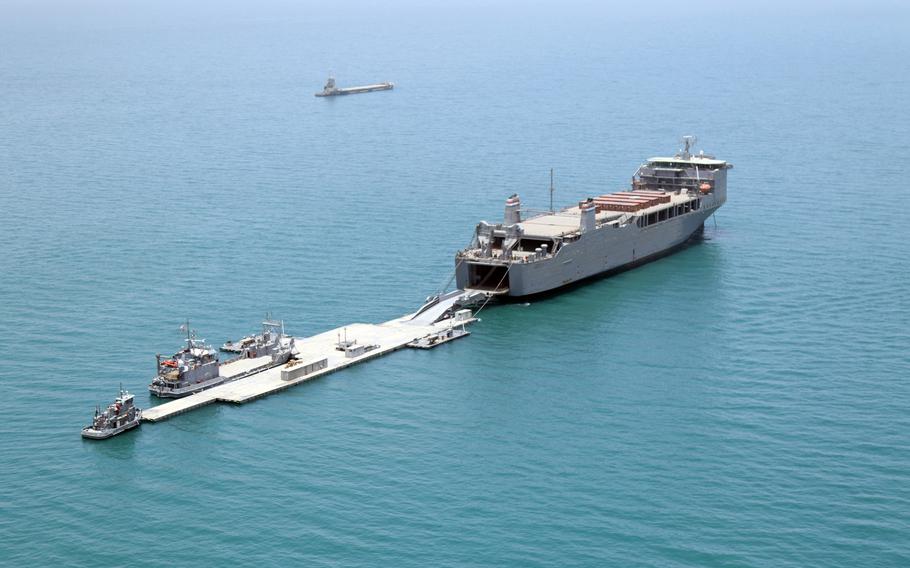 MANAMA, Bahrain – Nautical Horizon concluded with a display of the Army’s ability to quickly move and deploy its forces and equipment when pulling up to a pier isn’t an option.

Soldiers readied combat vehicles and supplies stored permanently in Kuwait, loaded them onto a massive floating platform and transferred the equipment to the Ready Reserve Force ship MV Cape Ray on Sunday, as part of the final movements of the seven-week exercise.

The U.S. Army Central operation aims to ensure that if trouble breaks out in the Middle East and there are no airstrips or easily accessible supply lines going into a conflict zone, the service can still land a large force on a foreign shore efficiently.

The exercise also showcased the Army’s little-recognized maritime force. It doesn’t have the Marine Corps’ amphibious assault vehicles or the Navy’s largesse, but it’s still designed to land troops and armor on beaches. Army ships undertook 6,100 missions during Operation Desert Storm in 1991, according to a Federation of American Scientists report.

About 300 National Guardsmen, reservists and active-duty soldiers and nine Army watercraft were involved in Sunday’s exercise, which was conducted in Kuwait and the Persian Gulf.

Nautical Horizon is held every two years. It is meant to test equipment, and more importantly, to confirm that the participating guardsmen, reservists and full-time soldiers can work together to conduct the difficult task of transporting mission-essential cargo.

Kuwait is home of the Army Prepositioned Stocks-5 site. The site stores $5.5 billion worth of equipment, allowing the Army to rapidly deploy resources until other supply lines are established, according to a U.S. Central Command statement.

This year marked the third iteration of Nautical Horizon, which began May 7. The exercise’s many stateside-based units will return to the U.S. early next month.