Army general works to revive traditions on bases in Japan 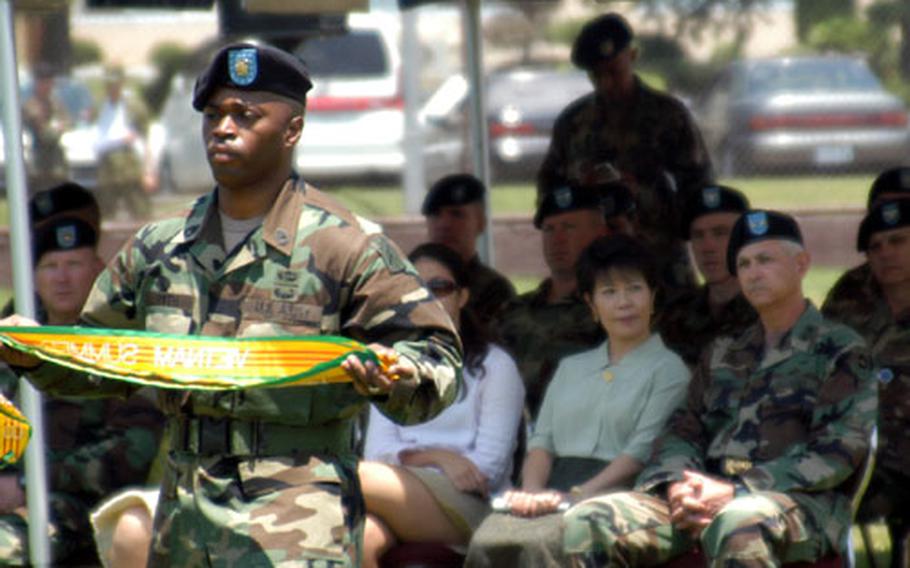 A soldier carries battle streamers to place on the Army flag during a Streamer Ceremony at Camp Zama. Seated in the background is Gen. Elbert N. Perkins who reintroduced this and other ceremonies. (Juliana Gittler / S&S)

As he tilted the 50-pound flagpole, soldiers gradually attached 174 battle streamers to it, each representing the major battles American soldiers have fought in throughout the Army&#8217;s history.

It was the first public streamer ceremony at Camp Zama in a long time and one of several traditional observances introduced this year by commander of U.S. Army Japan and the 9th Theater Support Command, Maj. Gen. Elbert N. Perkins.

Perkins reintroduced the streamer ceremony, tattoos and a monthly honor ceremony to help create pride among soldiers and honor the traditions of the Army.

The U.S. Army Japan band marched and performed pieces of music special to each and Perkins spoke about the merits of each officer&#8217;s tenure.

Perkins said he remembered the tattoo he received in 1997 as a colonel departing Fort Drum, N.Y.

&#8220;Our commanding general wanted to use that as a way to farewell a lot of his departing O-6s, so reflecting back upon that I remembered how nice it was,&#8221; Perkins said. &#8220;I thought that it would be a special way for us to be able to say thanks to a great bunch of soldiers and their families.&#8221;

The tattoo came from European armies and predates the United States. It was the final call before lights out and, according to Perkins, the longest and liveliest call of the day. It evolved from a bugle call to an elaborate marching ceremony and today salutes leaders ending their commands.

Perkins decided to reintroduce it after he took command last June.

In December, he asked Chief Warrant Officer Edward Leferink, leader of the U.S. Army Japan band, to create a tattoo for the colonels who would be leaving this year.

Leferink used recordings from the bandleader at Fort Drum to re-create the ceremony here. He wrote many of the marches and music.

For much of the band it would be the first tattoo, but Leferink has performed them elsewhere.

The band also performed the day before in the streamer ceremony.

&#8220;If you just put it into perspective, you think about what each of those streamers means and the lives that were paid during those streamers and the efforts, that kind of says it all. It&#8217;s a lot of battles,&#8221; said Command Sgt. Major Charles D. Hopkins, command sergeant major of U.S. Army Japan.

&#8220;It represents the blood, sweat and tears that have been paid by [soldiers] and their families earning every single one of those 174 streamers. Because the history of our nation is linked to those streamers.&#8221;

The two ceremonies, and monthly honor ceremonies to recognize soldiers and civilians, all strengthen the Army&#8217;s present by honoring the past, Hopkins said.

That is the major goal of these traditions, Perkins said.

&#8220;It is important during this time of transformation throughout the Department of Defense and the Army, and while we are fighting the war on terrorism, to go back to our roots and the basics &#8212; and the foundation of why we exist &#8212; and remind everyone that there&#8217;s more to the Army than the business end of what we do,&#8221; he said.