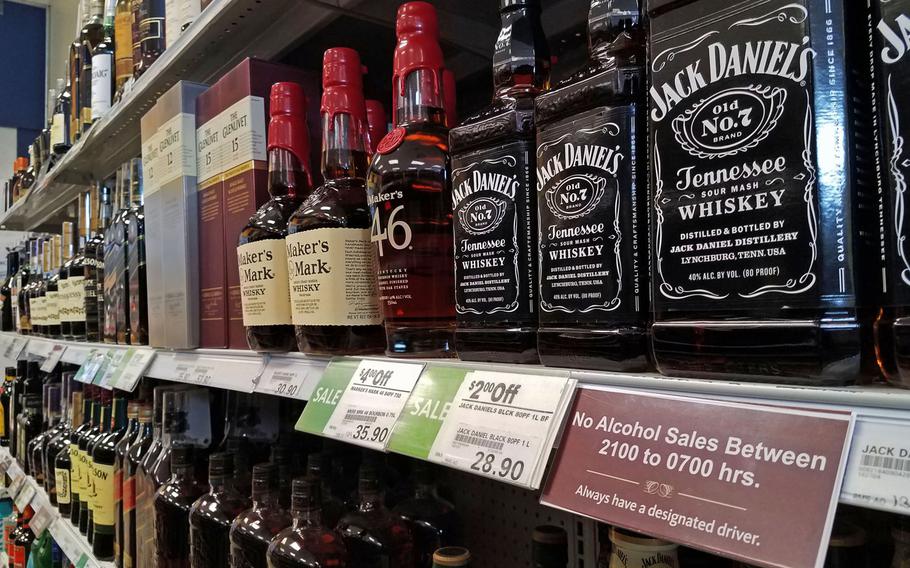 One of the signs posted at AAFES locations at U.S. Army Garrison Bavaria announcing a limit on the sale of alcohol at certain times, in accordance with the Alcohol Reduction Initiative, Grafenwoehr, Germany, Tuesday, May 15, 2018. (Martin Egnash/Stars and Stripes)

GRAFENWOEHR, Germany — U.S. Army Garrison Bavaria is seeking to cut down on the number of alcohol-related incidents by introducing restrictions on the sale of beer, wine and spirits and by conducting military police safety checks at the Grafenwoehr Training Area.

The initiative – which includes stopping alcohol sales after 9 p.m. at Army and Air Force Exchange Service stores at the garrison – was introduced last month after a spike in alcohol-related driving incidents at Grafenwoehr, base officials said. Such incidents, which include drunk driving arrests, increased from seven in January to 20 in March.

There is no set date to expand restrictions to installations in Hohenfels and Garmisch, but those posts may introduce it at some point if needed, Army officials said.

In April, five alcohol-related driving incidents were reported at Grafenwoehr; no incidents have been confirmed yet for May.

“Though we’re not jumping to conclusions, we’re hopeful that our initiatives are having an impact,” base spokesman Nathaniel Van Schaik said.

The restrictions and safety checks aim to curb unhealthy conduct related to alcohol consumption, such as high-risk behavior and suicide, in addition to drinking and driving.

An analysis showed that most alcohol-related incidents are occurring between 1 a.m. and 6 a.m., said Melissa Kreitzer, base community readiness and resiliency integrator.

“Unit readiness continues to be affected negatively by alcohol-related incidents occurring both on and off the installation,” Kreitzer told Stars and Stripes. “USAG Bavaria is working to create a healthy culture that leverages unit participation with existing resources to develop responsible drinking while reducing alcohol-related incidents throughout the community.”

Garrison military police are also making random safety stops, Kreitzer said. As a rule, police will not be conducting random blood-alcohol tests as part of the stops, though they do present an opportunity to catch drunk drivers. The primary aim is to give soldiers and community members safety tips and to pass out flyers that include emergency phone numbers, information about alcohol consumption and ideas for having fun without alcohol, Van Schaik said.

The initiative encourages soldiers to participate in activities where alcohol is not the principal focus. These include exploring the community, volunteering at the USO and participating in unit events, Kreitzer said.

Other organizations around the garrison are helping out. The base theater is offering their building as an alternative facility for substance abuse training, the USO will present an alcohol-free drink demonstration and the American Forces Network will carry out a radio campaign reminding listeners of the resources available to them.

The garrison began the initiative in conjunction with Alcohol Awareness Month in April.

In December, German police said that alcohol-related driving offenses are a problem in the area because troops often do not understand the seriousness of violating German laws.

Eschenbach Deputy Police Chief Armin Bock said that “the rotation of the troops” through the area was one reason for the relatively high incidence of DUIs. Grafenwoehr is the Army’s largest overseas training area.

“Often, (soldiers) are not sensitive enough to how Germany is treating drivers who are caught behind the wheel when they are drunk,” Bock said.