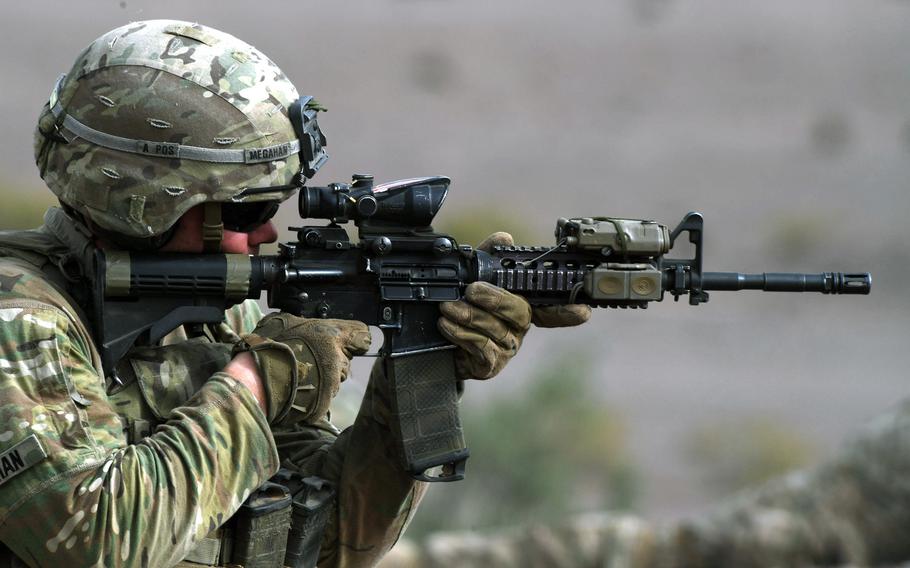 A soldier from the 10th Mountain Division fires an M4 rifle during team live-fire training on a range in Djibouti, June 23, 2018. The U.S. Army Tank-automotive and Armaments Command has found a fix for a glitch in the M4/M4A1 assault rifles, which causes the weapon to unintentionally fire. ( Haley D. Phillips/U.S. Air Force)

The U.S. Army has found a fix for a glitch in the M4 and M4A1 assault rifles that causes the weapons to unintentionally fire, officials said Friday.

“We know what the problem is, and we know what the fix is,” Tank-automotive and Armaments Command spokesman R. Slade Walters told Stars and Stripes. “The problem is fixed by modifying the selector to remove the tolerance issue and the fault.

“(TACOM) is working on an Army-wide directive to repair weapons with the issue that will be released when it is approved at the appropriate levels.”

The misfire glitch was discovered in March after a soldier firing on a range at Fort Knox got his rifle’s fire-selector switch stuck between semi- and fully automatic.

When the soldier pulled the trigger, the weapon failed to fire. The soldier then moved the selector switch and the weapon fired unintentionally, Walters said.

The Army issued a safety-of-use message earlier this year to all branches of the military, advising units to perform a function test on all variants of M16s and M4s.

“After receiving a significant number of reports from the field and an average failure rate of about 6 percent of the weapons inspected, we ended the inspections and have determined that the cause of the problem is a tolerance stack of the internal firing components,” Walters said.

By contrast, less than 1 percent of the M4s and M16s inspected were found to have the glitch.

The Marine Corps, which also uses M4s, said their weapons were functioning properly, in a statement in June.

All new M4A1s being issued by the Army are being checked for the selector glitch and corrected as needed, Walters said.