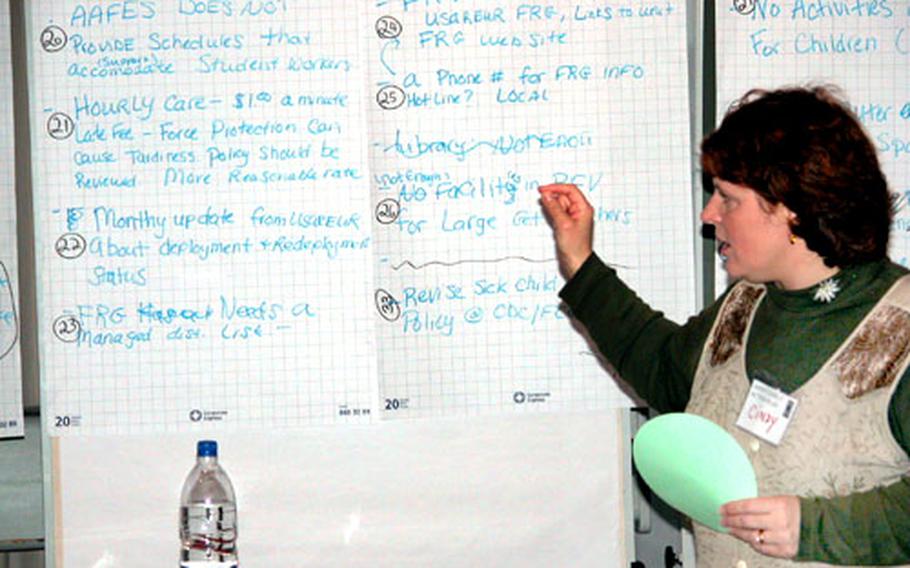 VIERNHEIM, Germany &#8212; So now there&#8217;s a plan to address community problems. Will there be action?

This year&#8217;s AFAP conferences kicked off Jan. 12-14 in Viernheim, a suburb of Mannheim. The rest are coming up. The conferences bring together residents of Army communities to talk about what works and what doesn&#8217;t, and then to recommend changes. The recommendations get sent to people who can address the problems.

Kitzingen had its conference earlier this month. Darmstadt&#8217;s is this week. Garmisch, Stuttgart and Vicenza, Italy, have theirs next week. Others will be held in February and March.

Brown, wife of Lt. Col. James Brown, the deputy provost marshal for U.S. Army Europe, said when they were stationed at Fort Leavenworth, Kan., an AFAP meeting there led to enlisted soldiers being moved into more favorable quarters. The nicer housing was being used as temporary housing.

The people sitting around the tables at AFAP conferences are called delegates. They bring issues to the table that are discussed and rated by importance. Sgt. Edgardo Sanchez was one of the delegates.

The most important problems and recommendations are put on the agenda for the Europe-wide AFAP, held on May 24-28 in Heidelberg. Some make it all the way to the Pentagon.

Better Opportunities for Single Soldiers was an AFAP idea. So were increases in housing allowances and life insurance coverage. Family support groups were made Army-wide.

Most of the issues don&#8217;t make it to the Pentagon, or even Heidelberg.

&#8220;Ninety-nine percent of the issues raised will be addressed at the installation level,&#8221; said Yannique Thomas, the AFAP coordinator for the 293rd Base Support Battalion, based in Mannheim.

They can be little conveniences created for the community, Thomas said. At Mannheim, for example, doggy doo collection stations were set up around the base. So were baby-changing sites at the food court and bowling alley.

Tammy Walker, wife of Maj. Robert Walker of the 293rd BSB&#8217;s Force Protection office, said she was asked to be a delegate one week before the conference.

Walker said she was bothered by school truancy, so she brought it up. She said she wanted Department of Defense Dependents Schools to establish a firmer way of tracking and punishing students who skipped school.

Walker&#8217;s gripe on truancy didn&#8217;t make the final cut of issues to be brought to Heidelberg. Others that didn&#8217;t included a claim that stores on base did not make schedules that suited student workers, and that there were too few after-school activities.

After the conference, some of the participants talked about what worked and what didn&#8217;t.

They decided that more subject-matter experts needed to attend to help delegates get good information before making recommendations. They decided that community members needed more ways to contribute to the conferences. Maybe issues could be e-mailed somewhere, they decided.

Thomas, Mannheim&#8217;s AFAP coordinator, said this was the 20th year for the program, and that it helps the Army retain good soldiers and keep up with changes.

Walker said she would participate again.

Here are the recommendations to improve Army life at Mannheim that were made by delegates to the 293rd Base Support Battalion&#8217;s Army Family Action Plan conference. Each of the four work groups voted on its top three problems.

Allow for a second vehicle to be shipped overseas to new duty stations. One vehicle per family is not practical.Expand hours at government travel offices for problems encountered nights and weekends.Improve inventory and service at auto parts store.Housing and Relocation Group

Improve the office that manages off-post housing (for example, update list of available housing, provide a uniform contract that everyone can understand).Allow persons living off post to use the self-help office to borrow tools.Allow more bedrooms for situations requiring Emergency Placement Care.Medical-Dental Services Group

Allow medical appointments to be scheduled evenings, weekends and Thursday mornings and provide transportation to and from appointments.Improve Tricare eye coverage to include frames and lenses.Provide civilian employees with the same availability to medical care as active-duty personnel.Family Services Group