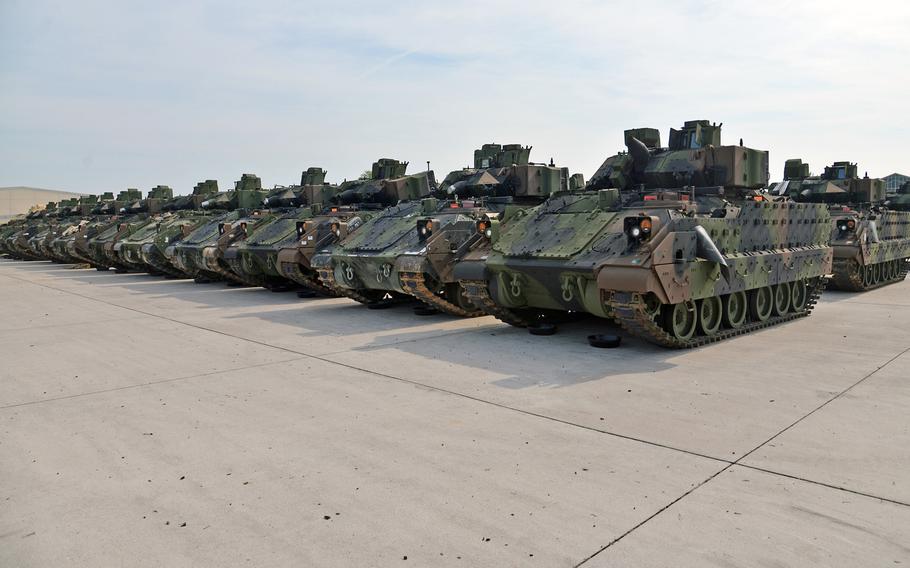 Buy Photo
Rows of Bradley Fighting Vehicles sit in orderly lines at Coleman Barracks in Mannheim, Germany in June, 2017. The U.S. Army said Thursday it expects to hold onto the facility until at least 2021 given the base's key role in stockpiling thousands of pieces of equipment for the military?s beefed up Europe mission. (Michael Abrams/Stars and Stripes)

STUTTGART, Germany — The U.S. Army will probably hold on to Mannheim’s Coleman Barracks until at least 2021 because of the base’s key role in stockpiling equipment for the military’s beefed-up Europe mission.

“It is very unlikely that we will be able to turn over Coleman Barracks (to the Germans) prior to 2021. Coleman plays a central strategic role for the US Army in Europe until further notice,” USAREUR said in a statement Thursday.

For some time, local officials in Mannheim have eyed the post to house migrants. But those plans have been put on indefinite hold because of the Army’s need for the barracks.

The U.S. military was poised to return Coleman to the Germans in 2015 as part of a broader post-Cold War drawdown in Europe.

But 48 hours before turning over the keys, the U.S reached a deal in February of that year to temporarily maintain access to the site, which was needed to house an influx of Europe-bound Army equipment.

In the wake of Russia’s 2014 invasion of Ukraine, the U.S. was forced to scramble for facilities to accommodate a rejuvenated USAREUR mission. Now, there are some 20,000 pieces of equipment stored at Coleman, ranging from M-149 Water Buffalo trailers to M1A1 Abrams tanks.

The Army has also set up a network of sites across Europe where it has pre-positioned stocks of equipment. The warehouses — mainly in Western Europe — include locations in Germany, Belgium and the Netherlands.

Work is underway to push more assets east, where NATO has been working to reinforce its defenses.

The Army is developing plans to construct a warehouse in Powidz, Poland, that could be ready for use by 2021, possibly to house such equipment as air-defense and fire-support weaponry.

In 2017, USAREUR visited various German military facilities to survey potential locations for more troops in case the Pentagon decided to send more to Europe in the future.

USAREUR, which hasn’t ruled out keeping Coleman beyond 2021, said there are logistical advantages to the Mannheim facility.

“Not as an airport, as it served for a long time, but because of the large area and the generously dimensioned rail connection, because of the proximity to the Rhine and the fast accessibility from Ramstein Air Base,” USAREUR said.

The Army operated an airfield in Mannheim years ago that is no longer in use.