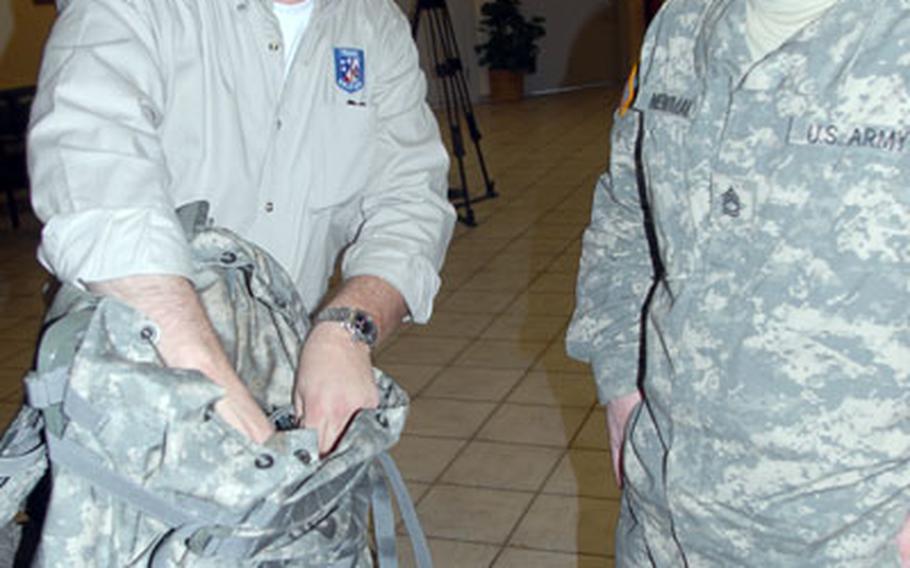 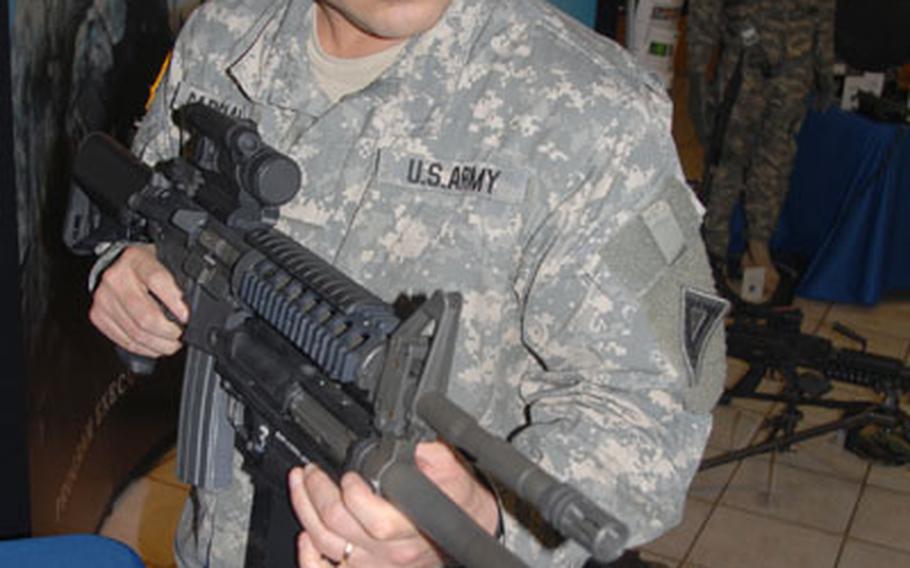 A soldier checks out a clip-on shotgun attachment for an M4 rifle at a new equipment display run by the Executive Office Soldier program at Hohenfels, Germany, on Tuesday. (Seth Robson / S&S)

HOHENFELS, Germany &#8212; Lighter, warmer cold-weather items were some of soldiers&#8217; favorite pieces of new gear on show in an exhibit at the Joint Multinational Readiness Center here this week.

The JMRC is the first of three venues in Europe where the hands-on exhibit, run by Program Executive Office Soldier, will showcase the Army&#8217;s latest weapons, clothing, sensors, lasers and other gear.

One 2nd Cavalry (Stryker) Regiment soldier browsing the exhibit Tuesday, Sgt. 1st Class Nelbert Michel, 33, of Bronx, N.Y., picked out the cold weather gear as the thing he was most interested in.

Another 2nd Cav soldier checking out the exhibit, Sgt. 1st Class Charles Newman, also was into the cold-weather gear.

&#8220;In the civilian sector, they are making this stuff better for any active person who goes skiing or climbing. I can be just as warm, but not having a bunch of garbage on me that is going to constrict my movement,&#8221; he said.

The weapons on display also had their fans, with soldiers lining up to get their hands on new shotgun and grenade launcher attachments for M-4 and M-16 rifles.

Perhaps the most futuristic-looking weapon displayed was the XM25 Air Burst weapon.

According to PEO Soldier representative Ward Eldridge, the 25 mm grenade launcher enables soldiers to designate a target with a laser and then fire at a point plotted by a computer so that the grenade detonates above the target.

PEO Soldier spokeswoman Debi Dawson said the first units to get the new gear will be those headed downrange in the first quarter of 2008.

&#8220;We are here because we want to let soldiers know they have the best equipment available,&#8221; she said.