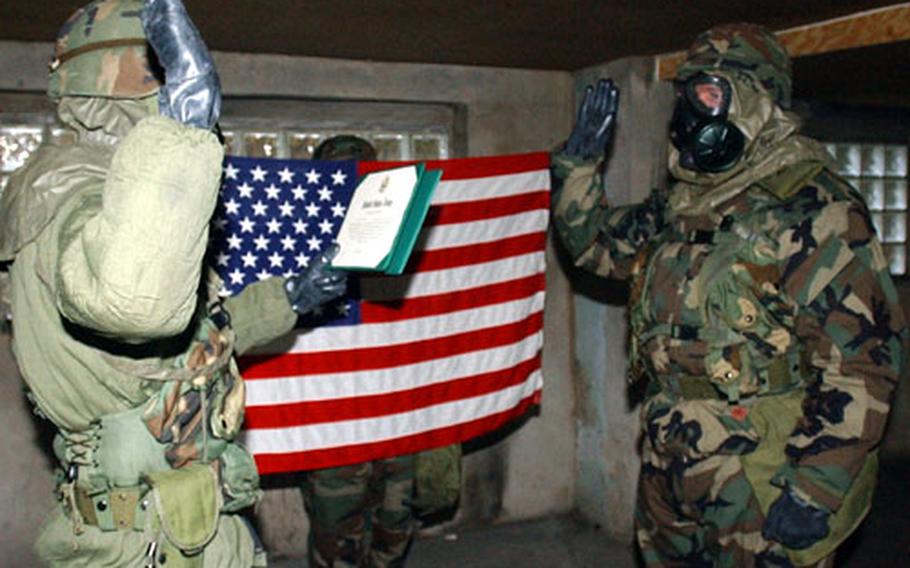 Staff Sgt. Toby Wolfe, the NBC NCO for Troop Support Battalion, 21st Theater Support Command, reenlists in the NBC chamber at Baumholder during a break in training last week. The Army overall met its reenlistment goal this year and a number of units in Europe exceeded their goals. (Courtesy of U.S. Army)

HEIDELBERG, Germany &#8212; If Army officials were worried that constant deployments would drive too many soldiers out of uniform, they can rest easy.

As the Army closed out fiscal 2003 at the end of September, so many soldiers had raised their right hands to re-enlist that the service met its retention goals and then some, retaining 106 percent of the soldiers it hoped to keep.

Of those, Vales said, 1,955 soldiers re-enlisted at the last minute, taking advantage of an 11th-hour $5,000 bonus offered in the last two weeks of the fiscal year. Nearly half of those takers were midcareer soldiers with fewer than 10 years in the Army, he said.

This year&#8217;s re-enlistment success comes after the Army dropped its goals twice over the past 12 months. Initially, Army officials had tasked retention noncommissioned officers to keep 57,000 soldiers from getting out of the Army.

&#8220;The goal for careerists was totally unattainable,&#8221; said Sgt. Maj. Luis Santos Jr., referring to the re-enlistment quota for soldiers who had already spent 10 years in uniform and are widely considered the easiest to persuade to re-enlist because they&#8217;re over the halfway hump to a 20-year retirement. Santos is the top retention manager in Europe.

In response to the outcry from retention NCOs in the field, the goal was quickly reduced by 3,000 troops at the beginning of the fiscal year. A few months later, another 3,000 troops were dropped from the first-termers&#8217; goal.

&#8220;We had to reduce the mission at that point because otherwise we were going to be overstrength by the end of the year,&#8221; said Vales.

Units based overseas &#8212; in Europe and the Pacific &#8212; were among the biggest contributors to the re-enlistment success, said Vales. Eighth Army in South Korea topped that list, retaining 126 percent of its goals by re-enlisting more than 800 soldiers over its goal of 3,244.

Of those, about one of every four took advantage of a re-enlistment option that allows the soldier to stay in Europe for another tour, according to Santos.

Santos credits USAREUR&#8217;s success largely on a positive command climate and the lure of European culture.

&#8220;Units have more cohesion and are focused on training while soldiers and their families have opportunities to see and do things they can&#8217;t do anywhere else,&#8221; Santos said.

The overseas commands also traditionally have higher retention rates, Vales said, because &#8220;it&#8217;s much harder to go job hunting when you&#8217;re in Korea or Germany. Typically, if a soldier is going to get out of the Army, he wants to do it in the States so he can find a job first.&#8221;

She&#8217;s headed from the 501st Forward Support Company in Vicenza, Italy, for a job in the Pentagon in January.

One of the biggest factors for her to consider was some freedoms she could enjoy being outside the military versus &#8220;the structure and stability&#8221; of the military.

Her six-month deployment to Iraq helped remind her of some of the advantages of military life: &#8220;Being in the field, being deployed, brings soldiers together a lot,&#8221; she said.

For others, however, lengthy deployments was a reason to leave the military.

Sgt. Allen Stoll, with the Headquarters and Headquarters Company of the 1st Battalion, 508th Infantry Regiment in Vicenza, said he&#8217;s leaving the Army in January, in part because of possible future deployments.

But a few recent injuries, which kept him from deploying to Iraq, and the desire to start a family &#8212; his wife also served in the Army &#8212; have led him to take up civilian life, he said.

Stoll says he doesn&#8217;t want to be away on deployments while his children grow up. He plans to head back to the States and take some college classes with his wife.

&#8212; Stars and Stripes reporter Kent Harris contributed to this report.