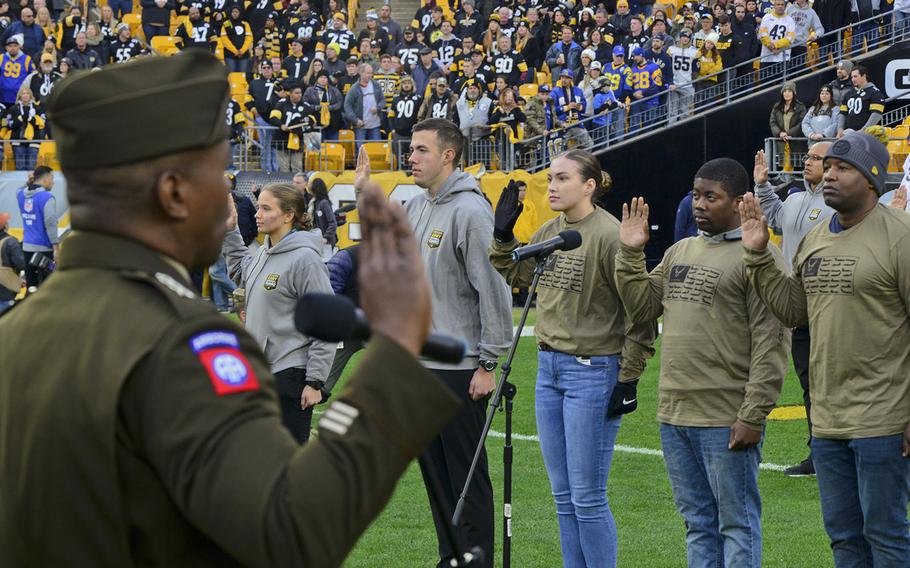 WASHINGTON — The Army is revamping the way it recruits after missing its recruiting goal in 2018 for the first time in more than a decade. It plans to build on 2019 efforts to refocus its recruiting system and marketing strategy to better connect with Generation Z — those born from the mid-1990s and about 2010 — who have grown up in a digital world.

The Army believes it is in a good position to bring enough recruits into the service and to retain enough soldiers to fulfill its fiscal year goals, according to Army officials.

Army Secretarty Ryan McCarthy and other top leaders have touted recruiting changes launched in 2019 as promising. They have added hundreds of recruiters; focused their efforts on social media and online gaming platforms; paid special attention to 22 urban cities where the Army has seen little success in recent decades; and emphasized efforts to reach minorities and women. For example, marketing products have been added in languages other than English.

In fiscal year 2020, “all of the new initiatives will be fully functional for the entire year. This will give us a solid period of time to gather data and evaluate the impact of the new initiatives before making further adjustments to how we do business,” said Lisa Ferguson, a spokeswoman for U.S. Army Recruiting Command.

Those efforts became necessary after the service missed its recruiting goal in 2018, falling 6,500 short of its goal to enlist 76,500 recruits in the fiscal year. After a hard look at went wrong, the service discovered its recruiting methods had largely gone unchanged since the 1990s.

The Army is optimistic about reaching its goals for fiscal year 2020, which began in October, Ferguson said. Still, the service must add thousands of recruits, including in some demanding specialties, to meet its needs in the next year when it aims to enlist more than 68,000 recruits.

The Army is not the only military service that has faced challenges recruiting and retaining service members in recent years. All of the military services have struggled to retain pilots, for example, who have flocked to high-paying commercial aviation gigs, and the strong economy has has driven prospective troops into the private sector. But the Army is the only service in recent years to fail to meet its recruiting goal or to attempt a ground-up rebuild of its recruiting and marketing enterprise.

In 2020, the Army is looking for recruits to enter the service as infantrymen, multiple launch rocket system crewmembers, air and missile defense crewmembers, cryptologic linguists and psychological operations specialists, Ferguson said. The service is offering bonuses, in some cases up to $40,000, to attract recruits in those and other jobs.

In all, the Army is offering bonuses or loan repayment options to those who enlist in 50 military occupational specialties.

They can range from a $1,000 bonus for those who enlist as a land combat electronic missile system repairer for three years to $40,000 for those who enter as a cryptologic linguist with a six-year commitment, she said.

As part of its efforts to reach Generation Z, the Army in November launched a marketing campaign aimed at 17- to 24-year-olds titled “What’s Your Warrior?”

Brig. Gen. Alex Fink, the chief of Army Enterprise Marketing, said the strategy is aimed at educating young people not directly familiar with opportunities within the Army, which include jobs far from the front lines.

The campaign has hyper-focused, targeted online ads aimed at young people, and will largely feature jobs like those in cyberoperations or biochemistry, Fink said in November.

“Young adults already know the ground combat role we play,” he said. “We need to surprise them with the breadth and depth of specialties in the Army.”