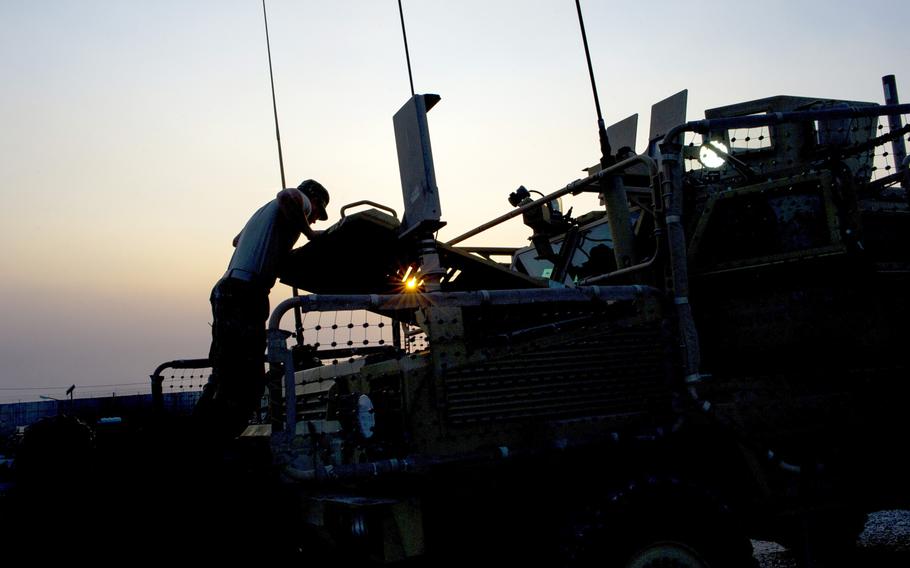 Spc. Samuel L. Esposito, 317th Brigade Engineer Battalion, 3rd Brigade Combat Team, 10th Mountain Division, closes the hood on a Mine Resistant Ambush Protected vehicle, Bagram Air Field, Afghanistan, Jan. 12, 2016. The Army doesn?t know if it got what it paid for on a contract in Afghanistan for vehicle and weapons maintenance, a Pentagon watchdog has found. (Nathan Hutchison/U.S. Army)

The Army doesn’t know if it got what it paid for on a contract in Afghanistan because officials didn’t properly review nearly $78 million in invoices for maintenance work, a Pentagon watchdog found in an audit released Wednesday.

The inspector general audit of the Enhanced Army Global Logistics Enterprise-Afghanistan contract, which covered vehicle and weapons maintenance, found that poor oversight had left the Army without “reasonable assurance” that the contractor met critical requirements or provided services commensurate with what it billed.

Awarded to AC First LLC in August 2016 and valued at $429 million, the cost-plus-fixed-fee contract provides maintenance services on armored vehicles and weapons throughout Afghanistan, including on Bagram and Kandahar air fields. As of May, the Army had paid out close to $78 million on the contract.

Fees could have been reduced if the work failed to meet requirements, but auditors found that officials failed to gather necessary feedback on the contractor’s performance.

“Specifically, (the contracting officer’s representatives) did not identify that the customers were not satisfied with the contractor’s maintenance turnaround time and expressed concerns about the operational readiness capability,” the report said.

In one example, a maintenance officer told auditors he didn’t always turn in his unit’s vehicles for regular maintenance because of extended wait times that would leave him with fewer vehicles available for missions.

Three units that auditors met with said vehicles sat awaiting final inspection for up to 10 days, even though all repairs had been completed. Those delayed inspections ultimately affected the units’ missions, the audit found.

During the past few months, the three commands responsible for parts of the oversight began making changes recommended by auditors, including adding a requirement that inspections be completed within 72 hours of all maintenance work.

Officials also discovered that the contractor had overbilled the government. As of May, they had already prevented more than $100,000 in erroneous charges, the report said.