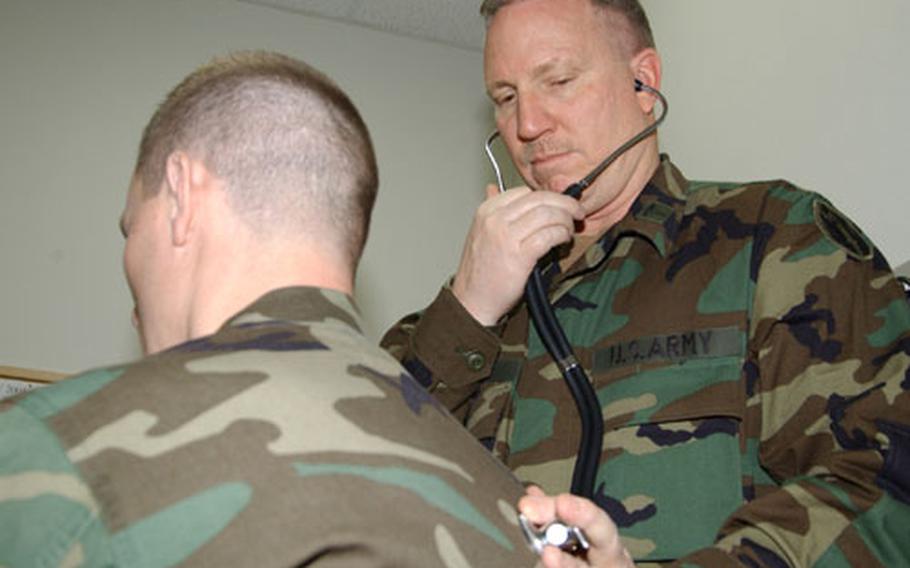 Col. Brian Rees, commander of the 349th General Hospital, a California reserve unit, examines a patient at Landstuhl Regional Medical Center. Rees is a family practice doctor and has accompanied his unit as it begins a rotation at the hospital. (Lisa Horn / S&S)

LANDSTUHL, Germany &#8212; Dr. (Col.) Brian Rees is not a typical Army officer. He writes books on healing the world, meditates twice a day and practices yoga to clear his mind.

It&#8217;s that clear thinking that has won Rees the respect of his soldiers and his patients.

The colonel in command of the Los Angeles-based 349th General Hospital, currently serving as a family practice physician at Landstuhl Regional Medical Center, is a published author of a book on terrorism and another on ayurvedic health methods. Ayurveda is a holistic system of medicine from India that aims to provide guidance on food and lifestyle so that healthy people can stay healthy and people with illnesses can improve their health. Rees&#8217; most recent book, &#8220;Terrorism, Retaliation and Victory,&#8221; promotes psychological operations as a way to prevent future terror attacks and minimize casualties.

Preventing problems before they arise is also how he looks at medicine in a society that focuses more on treating diseases than on preventive care, said Rees, who titled his first book, &#8220;Heal Yourself, Heal Your World.&#8221;

Rees said he takes the same proactive approach to his soldiers that he does to medicine.

In the largest mobilization of the 349th&#8217;s history, roughly 300 soldiers will serve at Landstuhl for 18 months. Despite the long rotation, Rees said his troops are in good spirits.

Rees, who normally works as a family practice physician at a prison in San Luis Obispo, Calif., got a special waiver to accompany his unit for 90 days while his soldiers adjust to their new duty station. Ordinarily, the commander stays behind, Rees said, unless the entire unit has been mobilized.