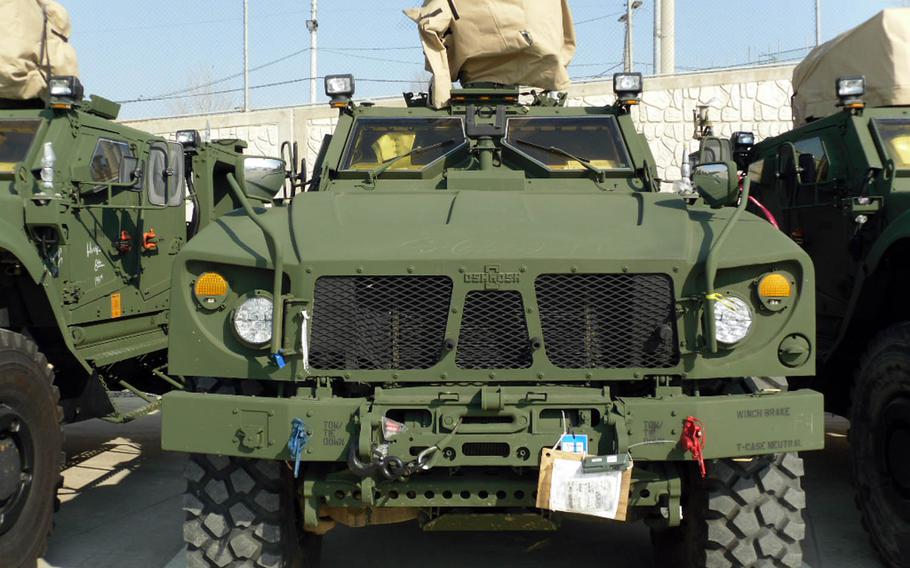 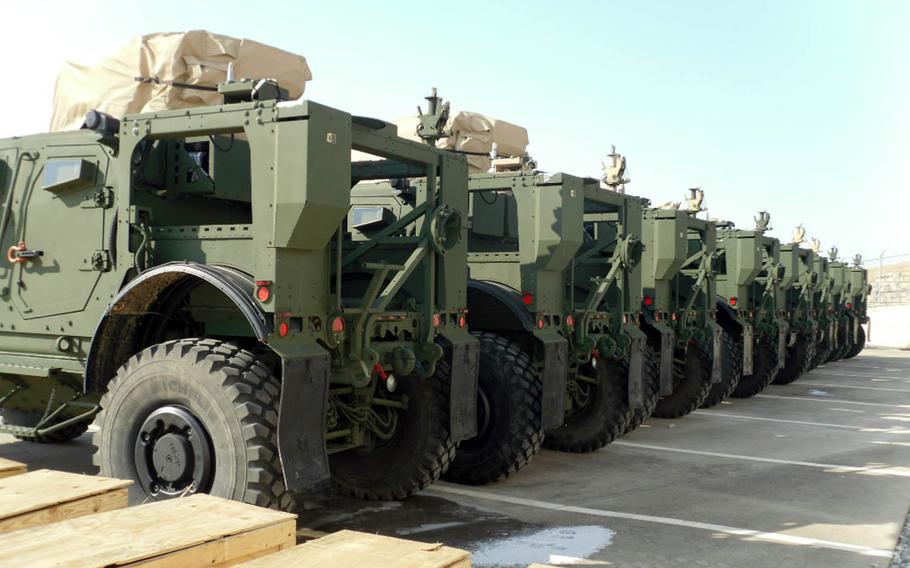 SEOUL, South Korea — The Army is sending more than 100 Mine Resistant Ambush Protected vehicles to South Korea to boost troop protection capabilities as tensions rise on the divided peninsula.

The decision is a reversal after a 2012 feasibility study found that MRAPs — famous for saving countless lives from roadside bombs in Iraq and Afghanistan — weren’t suitable for maneuver battalions in South Korea.

The 8th Army says it began fielding MRAPs and smaller versions known as M-ATVs in late December and was on track to complete the deployment to multiple locations by the end of February.

The armored vehicles, with their V-shaped hulls, will provide soldiers “a more durable battle proven armor configuration and provide improved crew survivability” as they maneuver “over the most grueling terrain,” 8th Army spokeswoman Lt. Col. Catina Barnes-Ricks told Stars and Stripes Friday in an email.

“All Eighth Army units throughout Korea will receive the MRAPs,” she added.

The vehicles are arriving in time for joint U.S.-South Korean war games due to begin in March, although the military didn’t offer specifics about how they would be used.

North Korea, which is extremely sensitive to the addition of any military equipment on the peninsula, criticized the planned 2012 arrival of the MRAPs, which are designed to deflect the force of an explosion.

“These vehicles capable of protecting troops aboard from mines or explosives are aimed at safely crossing the Military Demarcation Line before mounting an all-out attack on [North Korea] once they kick off a war against it,” a report in the official Rodong Sinmun newspaper said at the time.

North and South Korea are divided by the so-called Demilitarized Zone, a strip of land about 160 miles long and 2.5 miles wide. Despite its name, the area is dotted with tens of thousands of land mines and lined with barbed wire.

The U.S. has some 28,500 servicemembers stationed in the South, which remains technically at war with the North after the 1950-53 conflict ended in an armistice instead of a peace treaty.

South Korean officials also have pointed to an increase in the number of defectors from the North as a sign of potential instability within Kim Jong Un’s regime.

MRAPs would be invaluable for potential counteroffensive operations, said Park Hwee-rhak, head of the graduate school of politics and leadership at Kookmin University in Seoul.

“The military needs to prepare for the worst-case scenario,” said Park, a retired South Korean army colonel. “There are many kind of land mines in that area so if we want to make some kind of military operations along the DMZ we need a kind of mine-resistance maneuver vehicle.”

The 2nd Infantry Division, which is based near the border with North Korea, tested the use of MRAPs in 2012 but found that the vehicles were “not suitable for maneuver battalions” in Korea and decided not to add them to their fleet “in the foreseeable future.”

However, decisions about changes to the fleet of vehicles are made by the Department of the Army and requirements are often reassessed, Barnes-Ricks said.

The 8th Army had “identified an enduring requirement for MRAPs,” she said, adding that the vehicles are ideal for providing protected mission command and transportation platforms.

“Battlefield dynamics have changed in Korea and modernization has changed how the Army fights in the field,” she said. “MRAPs are an additive to our existing armored vehicles and provide enhanced capabilities and protection for [the 8th Army] on different terrain in the Korean peninsula.”