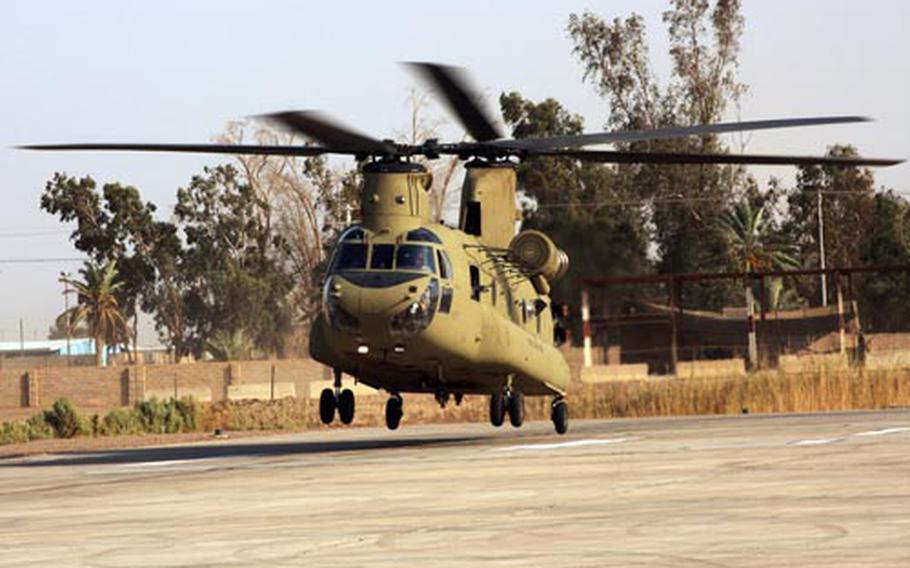 A CH-47F Chinook Improved Cargo helicopter comes in for a landing on Camp Taji&#39;s helipad landing this week. These new Chinooks are the first of their kind to hit the battlefield in Iraq and are being flown by the Combat Aviation Brigade, 4th Infantry Division. (By Whitney Houston/Courtesy US Army)

The U.S. military has begun using the latest version of the Chinook cargo helicopter in combat operations in Iraq, officials said this week.

The CH-47F Chinook Improved Cargo is now being flown by the Combat Aviation Brigade, 4th Infantry Division, from Camp Taji, north of Baghdad. It is the first time the helicopter has been flown in combat, officials said.

Operational testing on the helicopter was done at Fort Campbell, Ky., last summer, and operational units began receiving the aircraft later in the year.

According to the Army and Boeing, which manufactures the Chinook, the improvements include new engines that can propel the helicopter more than 175 mph. Payloads can now top 10 tons.

Each new CH-47F costs around $32 million, officials said. Many of the airframes have been "remanufactured" from older versions of the CH-47D.

Many of those aircraft are now nearing 30 years of use, officials said. But the improvement program can "extend the aircraft&#8217;s life expectancy another 20 years (total life of 60 years) until the 2025-2030 time frame," according to the Army.